The impact of half-truths, hoaxes and misleading health information can be life-threatening, ranging from misapplication of funds to misdiagnosis and death.

Since 2017, we at Africa Check have rapidly increased our health fact-checking work in Nigeria with support from the Bill & Melinda Gates Foundation. As part of this work, we’ll be hosting a two-day workshop in September 2018 in Abuja on tackling harmful health misinformation.

In an earlier research study, Africa Check asked 10 health and health communication experts about their experience with health misinformation in Nigeria.

A bottle of local "viagra" for sale in Lagos in March 2014. Medical professionals have warned that rather than enhancing sexual prowess, regular users of the product could be putting their long-term health at risk. Photo: AFP/PIUS UTOMI EKPEI" />

Health misinformation in Nigeria varies from “cruel hoaxes” such as drinking saltwater to cure Ebola, to general misperceptions about causes of disease, mode of transmission and available treatment.

There are also ungrounded concerns about the safety of medical interventions. Classic examples include false beliefs about contraceptives and vaccinations.

Birth control measures have been said to trigger infertility, reduce sexual urges, cause cancer and lead to the birth of deformed babies, says Dr Funke Fayehun, a senior lecturer at the University of Ibadan. In the past, Africa Check found claims about contraceptives and cancer misleading.

In the early 2000s, rumours of polio vaccines being a tool to reduce the population went viral and set back polio elimination by many years, says Dr Chikwe Ihekweazu, CEO of the Nigeria Centre for Disease Control.

He also refers to rumours in 2017 that the government army was forcefully injecting school children with the monkeypox virus after an outbreak in some Nigerian states. According to Ihekweazu, the false claim impaired medical interventions and interrupted schooling. “Even after it was proven to be false, many schools remained closed as parents lived in fear.”

Regina Igwubor, a social worker at the Youth Empowerment and Development Initiative, has come across numerous examples of health misperceptions in the course of her work.

She wrote about asking young people in Lagos how malaria is spread. The answers ranged from drinking dirty water to taking too much red palm oil or eating unripe plantain. According to Igwubor, misinformation about malaria continues to stand in the way of proper diagnosis and treatment.

Dr Noel Ihebuzor, a Nigerian development expert, says a common type of misinformation in Nigeria is drug manufacturers and their agents giving oversimplified or partial information in over-the-counter drug adverts.

“Adverts for over-the-counter drugs such as those for the treatment of malaria, headaches, the common cold and worm infections contain oversimplification, which could misinform an uncritical audience,” says Ihebuzor.

On the other hand, he says, health practitioners “overdramatise” messages about HIV/Aids, Ebola and Lassa fever so as to provoke fear and discourage certain behaviour.

What’s at the root of the misinformation problem?

The experts we spoke to said cultural factors, social media, journalists’ lack of expertise and deficient primary healthcare were contributing to the spread of misinformation.

A senior health specialist at the World Bank, Dr Oluwole Odutolu, says myths and superstitions about diseases exist in every worldview.

However, “deeply religious” Nigerians tend to accept what religious leaders present as the truth without looking at the facts, says Dr Ifeanyi Nsofor, CEO of public health consultancy firm EpiAfric. In his view, Nigerians have “generally poor health-seeking behaviour” – a result of poverty, religion and a poorly functioning health system.

“Many health experts and quite a few journalists speak and write with religious bias and spurting traditional superstitions,” says Eromo Egbejule, a Nigerian journalist and West Africa editor of the Africa Report magazine.

He says many Nigerian reporters cover general beats, so the detail that comes with specialisation is often lacking.

Ihekweazu laments the lack of skilled science and health journalists, saying that sensational headlines and hearsay get in the way of fact-based reporting.

Ihebuzor identifies two motivations for the spread of health misinformation in Nigeria: the well-meaning person sharing information without cross-checking its accuracy, and more sinister motives like misusing the internet to market products and fake cures.

He says another challenge is the failure of government agencies tasked with creating awareness of health issues.

Lastly, Nsofor points to a lack of proactive health communication. “The dysfunctional health system implies that health workers do not routinely provide health education to the populace. Primary healthcare in Nigeria is mostly not functional.”

What is the cure?

Ihebuzor calls on civil society to improve training in the design, illustration and accuracy of information in health messages.

Health promotion and health education “backed by a wholesome health communication strategy” is key to addressing misinformation, says Jimoh. Devcoms has been involved in the polio eradication initiative and HIV/Aids programmes that fight prejudice and promote prevention. Partnerships and a responsive media are critical to the success of these programmes, he says.

In addition, says Ihekweazu: “Journalists who report health stories should focus on developing their skills in this area and disseminate only verified information without sensationalism.” 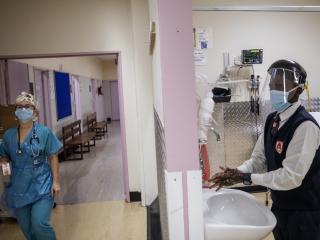 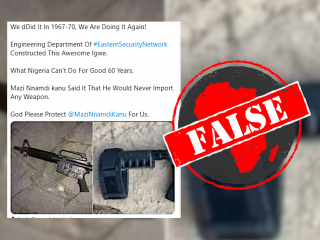 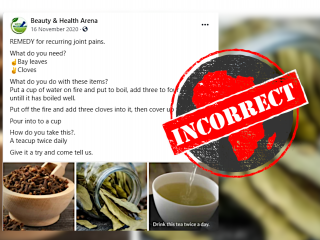 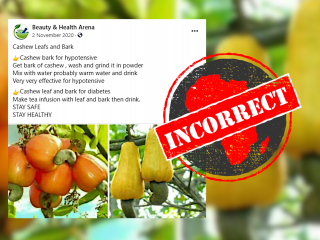 No evidence cashew leaves and bark treat hypotension and diabetes 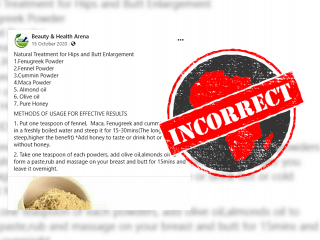 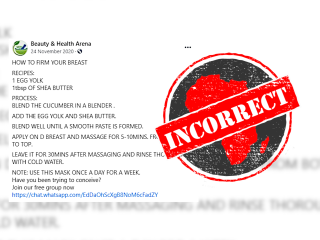