The city that works for you, except if you're poor

Last week, Cape Town metro police accosted a blind 51-year-old guitarist who had been performing for tips at the St George’s Mall in the heart of the city since 2008. During the altercation that followed, partially captured on video, law-enforcement officials broke Lunga Goodman Nono’s guitar, threw him to the ground and frogmarched him into the back of a waiting van.

In the wake of the incident, city officials claimed that Nono had repeatedly ignored warnings that he was performing outside of his allotted time, in contravention of the city’s by-laws. This is what ostensibly earned him the attention of the law-enforcement officers, who then crossed the line from law enforcement to assault. It was only after video of the assault went viral on social media that they were suspended for three months pending a disciplinary hearing.

“The city supports busking and creative forms of entrepreneurship. In this case, officers reported that they were merely trying to enforce that the busker stick to the regulated times, following a number of complaints from local businesses,” JP Smith, mayoral committee member for safety and security, said in a media statement that repeated the word “by-laws” at least six times.

Days later Cape Town’s mayor Patricia de Lille said an investigation had been launched and suspension proceedings had begun against three law-enforcement officers involved in the incident with Nono. Like Smith, De Lille suggested that the incident was based on balancing Nono’s right to freedom of expression and artistic creativity against the rule of law. 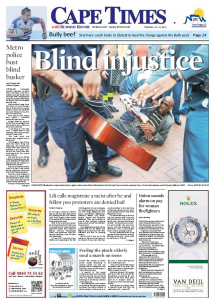 After some sniffing around and hammering on the doors of shirking city officials, I discovered that the widely reported by-laws that Nono supposedly contravened, the ones that, according to news reports, limited the hours he could play his guitar to a 75-minute slot between 12.45pm and 2pm on weekdays and 10am to midnight on Saturdays, did not exist.

Cape Town officials eventually conceded that the stated hours originated in an apartheid-era policy document last updated in 1993. They did not come from the provisions of a by-law.

Both De Lille and Smith have deliberately tried to create the impression that the actions of the law-enforcement officers had some basis in law.

According to Richard Bosman, Cape Town’s executive director of safety and security, the metro police were enforcing a Cape Town council policy document from 1993. This policy document, a copy of which Bosman could not produce or name, despite repeated requests, is said to govern the time periods during which busking is allowed in the city centre.

It is this archaic policy document of dubious legal enforceability and questionable existence that set the suspended law-enforcement officers on a collision course with Nono.

According to Bosman, Nono was fined R500 and charged with “malicious injury to property” while his wife Abigail was fined R1,000 and charged with “disobeying an instruction from a peace officer” under the prohibited behaviours section of the “streets, public places and the prevention of nuisances by-law”. Ironically, this by-law specifically recognises that street entertainers like Nono are not noise nuisances.

Responding to whether it was appropriate or justifiable to use an apartheid-era policy to limit the abilities of a poor, black, elderly, blind man to make a living in post-apartheid South Africa, De Lille’s spokesman Solly Malatsi expressed regret that the policy had not been rescinded.

“This is exactly why the mayor has initiated a review of the laws and regulations governing busking following the unfortunate incident involving Mr Lunga Goodman Nono,” he said.

Malatsi also backed De Lille in saying this was an isolated incident.

Is Cape Town living up to its motto? 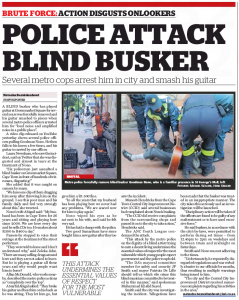 However, in May this year, the city’s anti-land invasion unit, part of the same law-enforcement department that assaulted Nono, was caught using legal pretext to evict shack dwellers who had occupied a vacant piece of city-owned land. In that instance, the city first claimed the unit was acting in terms of the Protection of the Possession of Property Act, but after it was exposed that no such act existed, the city invoked the common law notion of “counter-spoliation”. Several legal experts said, however, that counter-spoilation did not apply in the case of the evicted shack dwellers.

Taken in combination with recent controversies around the street lights in Khayelitsha and bucket toilets within the city’s municipal bounds, both instances in which the city was accused of being liberal with the truth to the detriment of the poor, the Nono case calls into question whether the Cape Town is really living up to its motto of “This City Works For You”. If these incidents are anything to go by, the city’s real motto is “This City Works For You, Except If You Are Poor”. If you are poor, this city, as Nono said, has had enough of you.

TO Molefe is a Cape Town-based writer. 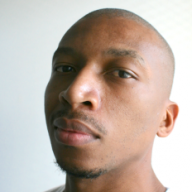 PDP to the rescue? Verifying three claims about terrorism and jobs by Nigeria’s main opposition party

The Peoples Democratic Party is drawing attention to the record of the governing All Progressives Congress. But are all its claims accurate?