Skip to main content
Back to Africa Check
Education
transformation

COMMENT: Where's the evidence for the Free Market Foundation’s 'facts'?

At Africa Check, one of our guiding principles is to ensure that both sides of a debate are fact-checked.

In mid-August, former Economic Freedom Fighters member of parliament, Andile Mngxitama, wrote an article on behalf of the Black First Land First movement, claiming that  “twenty years after democracy, black people are still at the bottom of society”. We researched his factual claims and published the findings - earning us a rebuke from Mngxitama that Africa Check is a “pseudo research outfit for colonialism”.

Two weeks later the head of South Africa’s Free Market Foundation wrote an article on what he called “transformation denialism”. Leon Louw claimed that “despite the fact that there has been a spectacular amount of transformation, the established consensus is that little has changed and that whites still own everything”.

Mngxitama had argued that “black people are last in all areas of life”. Louw reasoned that “there has not been a ‘slow pace of transformation’ [in South Africa]; it has been astounding”.

We had fact-checked Mngxitama. Now it was time to look at Louw’s claims.

‘We are certainly not ignoring your request’ 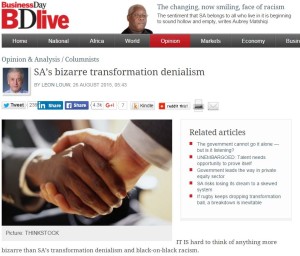 Louw spoke Africa Check’s language when he wrote: “Platitudes float around as if someone somewhere checked the facts. Myths about facts cause bad policies.”

To counter the “established consensus”, he said that his office had collected “all the available facts”. Louw then listed 15 statements as evidence of how the living standard of black people in South Africa has improved. These included figures for black families in “formerly white suburbs”, the percentage of judges who are black, “black phone ownership” and “black literacy”.

We contacted the Free Market Foundation on 31 August 2015 to request their sources. Media liaison Jayne Boccaleone replied saying she would check with Louw and get back to us.

We then followed up on a weekly basis, but were told that Louw was sick, that he was travelling and that he was busy with more urgent deadlines.

During one email exchange Boccaleone wrote: “We are certainly not ignoring your request and we understand the importance of the work you do for Africa Check.”

And still we waited. 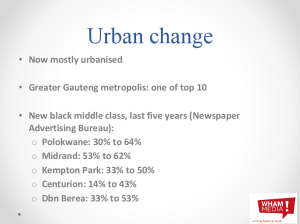 On 5 October, a researcher at the organisation, Kate Louw, finally sent us a list of documents, reports and presentations. But some of the documents simply repeated the same claims that Leon Louw had made.

For example, to support his claim that “private schools are 72% black”, Africa Check was directed to a report containing the claim but no source. This isn’t supporting evidence. It is a statement.

In other cases the documents provided contained contradictory claims. For example, The Presidency’s Twenty Year Review supposedly supported the claim that the number of “blacks living on less than $2 a day fell from 16% to 2.5% since 1996”.

To back up Leon Louw’s claim that “between 1996 and 2011 total black disposable income grew 370% from R161 million to R756 million, and personal income grew 300%” Kate Louw sent us part one and part two of a Helen Suzman Foundation report titled Distribution of Income and the Distribution of Wealth in South Africa. Yet the closest the documents came was listing a table of each population group’s estimate share of national income in 2011.

Leon Louw said that his claim that “there are more middle-class blacks in formerly white suburbs than the entire white population” was “extrapolated” from a presentation he provided. But the presentation slide did not contain the claim or explain how the conclusion was reached. Rather it contained vague figures regarding the “new black middle class, last five years” for Polokwane, Midrand, Kempton Park, Centurion and Durban Berea.

Although Leon Louw wrote that his “office gathered all available facts” to support his claims, the sources for four are still outstanding.

Kate Louw said that these claims were “generally from mainstream media or trite knowledge”:


“I have been requested to follow up on looking for the stats that are missing from the list Leon has compiled,” Kate Louw told Africa Check. This is the equivalent of putting the cart before the horse when it comes to research: make a claim, find the evidence later.

After all, as Leon Louw wrote, “platitudes float around as if someone somewhere checked the facts.” It is a pity that until the foundation provides evidence, the same can be said about his claims too.

Note: On 12 October Africa Check again asked the foundation to send us primary sources for all the claims, but have not received a response to date. Nevertheless, we have started to fact-check the claims. Here is part one: Claims of South Africa’s ‘spectacular transformation’ fact-checked.