REPORT CARD: South African president Ramaphosa’s claims about the state of the nation

With Cyril Ramaphosa set to give his fifth state of the nation address today, we look back at the president’s claims in the past two years – and suggest tools you can use to check the speech yourself.

South African president Cyril Ramaphosa is set to deliver his fifth state of the nation address (Sona) on 11 February 2021. The speech traditionally outlines the government’s progress so far, and its plans for the next financial year.

Covid-19 restrictions mean a limited number of people will attend the event in parliament. And some ceremonial aspects, such as the red carpet procession, have been scrapped.

As in previous years, Africa Check will listen out for key claims by the president. Will he stay on the right side of the facts? Tune in to find out.

That said, we now examine Ramaphosa’s Sona track record.  We look back at some of the claims (and a promise) he made in the last two addresses – and give updates.

The 2018 state of the nation address was postponed for more than a week as the presidency changed hands from Jacob Zuma to Ramaphosa.

Ramaphosa’s maiden address, delivered with reference to Nelson Mandela, touched on key issues such as education, employment and poverty. Africa Check examined 12 of his claims and found 10 to be correct, and two incorrect.

Claim: ‘Our state employs some one million public servants.’

For example, two people working full-time for six months in a year count as one full-time equivalent. 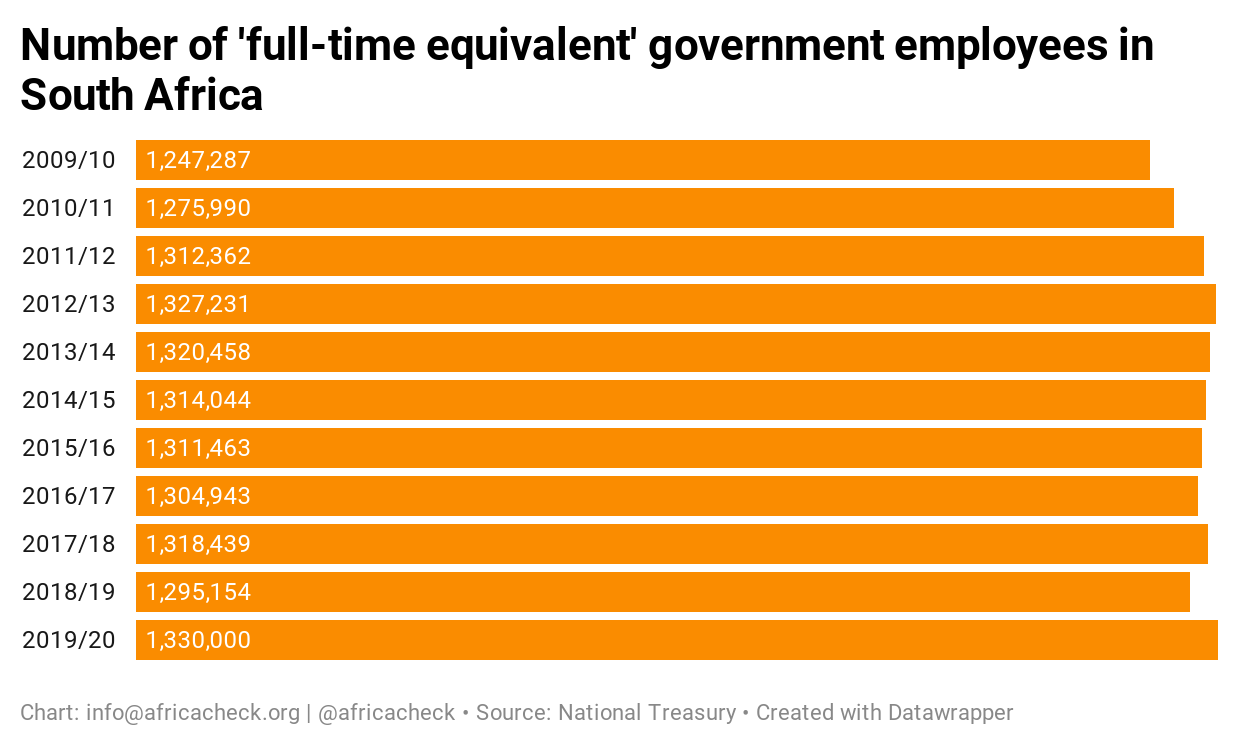 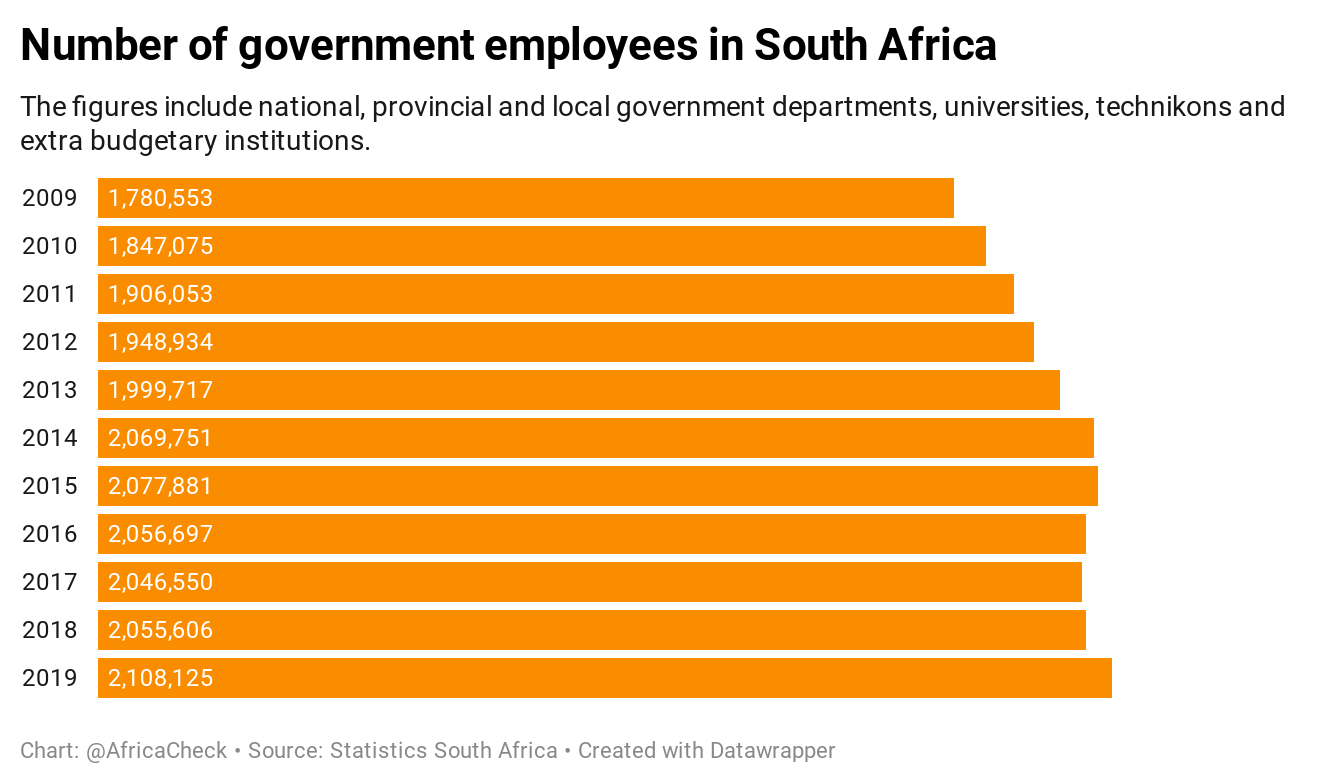 These totals are made up of figures from national, provincial and local government departments, universities and technikons, and extra-budgetary institutions such as the South African Revenue Service, the Road Accident Fund and the Unemployment Insurance Fund.

Tip: Consider comparing different data sources to evaluate claims. You may need to consult an expert to check which set of data is more accurate. This will help you get the full picture.

Promise: ‘We will initiate an additional 2 million people on antiretroviral treatment by December 2020.’

Ramaphosa’s promise was, effectively, that nearly 6.2 million people would have ART by December 2020. He made the commitment at the end of the 2017/18 financial year. That year, the health department reported that an estimated 4,189,070 people were on ART.

To hit Ramaphosa’s target of 6.2 million, the number of people on treatment would have had to increase by 1,500,000 from July 2019 to December 2020. But data for this period is not yet available.

Estimates from the health department suggest that Ramaphosa’s promise may have been ambitious. The department aims to have 6,100,000 people on treatment by March 2021.

Tip: Promises with targets set in the future are difficult to check. But we can log promises and track their progress over time. Visit our Promise Tracker to find out how.

Sona 2019: ‘Let's grow South Africa together as we celebrate 25 years of freedom’

Ramaphosa delivered his second state of the nation address on 7 February 2019. It was also the fifth and final address of the existing administration before the national election in May.

Africa Check looked at 12 claims in the address. Eight were correct and the rest a mixture of mostly correct, unproven and understated. We revisit two.

Claim: ‘Since the launch of the Safe initiative, 699 schools have been provided with safe and appropriate sanitation facilities and projects and a further 1,150 schools are either in planning, design or construction stages.’

The Sanitation Appropriate For Education (Safe) initiative was launched on 14 August 2018. Its main objective is to replace unsafe pit latrines at schools with better, safer toilets.

A government audit of schools in May and June 2018 found that, nationwide, the only toilets available at 3,898 schools were pit latrines. Another 3,040 had “proper sanitation”, but still had pit toilets on their grounds.

The basic education department told Africa Check that Ramaphosa’s figures were from December 2018. Since then, 88 more schools had been upgraded, bringing the total to 787, spokesperson Troy Martens said.

But the education-focused civil society organisations Equal Education and Section 27 told Africa Check it was difficult to independently verify the department’s numbers.

What do the figures look like today? In a December 2020 written reply to a parliamentary question, basic education minister Angie Motshekga said that of the 3,898 schools identified, 427 had closed down. A further 725 schools were assessed and found to have adequate toilets.

The remaining 2,747 schools needed intervention, she said. Upgrade work at 612 of those schools had reached “practical completion”, while construction continued at a further 420.

But, as with Ramaphosa’s claim, it is difficult to independently verify these figures.

Tip: To assess claims about projects that span years, check if the individual figures add up. You may need to look at several reports and other documents to do this.

Claim: ‘We have launched the Youth Employment Service, which is placing unemployed youth in paid internships in companies across the country.’

The government’s Youth Employment Service was launched in March 2018 with the aim of creating a million jobs for young people using “innovation and technological best practice”.

The initiative is a partnership between the government, business, labour and civil society. It is meant to provide work experience, job placements (or the option for businesses to “sponsor” work placements) and training for people aged 18 to 35.

By February 2019, 319 companies had registered for the service but only 6,939 “work experiences” had been confirmed.

Today – in February 2021 – 1,305 companies have registered and more than 47,158 work experiences have been created. “These numbers change on a daily basis,” Youth Employment Service spokesperson Mokebe Thulo told Africa Check.

Join us! Here’s how to be a fact-checker

Want to fact-check claims in Ramaphosa’s speech tonight? These data sources may be useful:

We want to hear from you

Will you be listening to the state of the nation address on Thursday evening? Send us the claims you think need fact-checking. Talk to us on Twitter (tweet @africacheck using #SONAfactcheck) or email [email protected].