Is Swaziland a democracy? According to Government Press Secretary Percy Simelane, the answer is a resounding “yes”.

Simelane made the claim in the wake of a CNN.com opinion piece that took a swipe at the “countless dictators and their right-hand men” who had attended former South African president Nelson Mandela’s memorial service, including Swazi Prime Minister Barnabus Sibusiso Dlamini. Simelane told the Times of Swaziland Sunday that the fact that the people of Swaziland are able to choose their representation in Parliament is indicative of the “dictates of true democracy”.

“We have a parliament that is elected by the people. The constitution provides that a certain percentage of ministers must come from the people,” said Simelane.

Simelane’s statements echo those of King Mswati III, who last year claimed Swaziland as a “monarchical democracy… a marriage between the monarch and the ballot box” in which the people are empowered to advise the king.

The claim to democracy 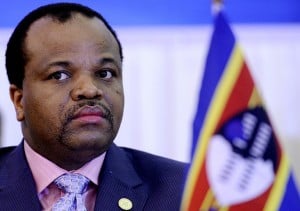 According to Simelane, the constitution that was adopted by the people – not imposed on them – at the royal cattle byre and promulgated in 2005 is an expression of the people’s views on how they should be governed.

The royal byre or sibaya is where a “people’s parliament” comprised of Swazi citizens meets periodically to consult about issues affecting the country. Through this, Simelane said, the country’s leaders rule on the basis of public opinion. He also claimed judicial independence as evidence of democratic practice.

“As a country we don’t understand why we are perceived as an undemocratic state when the will of the people determines the way we do things,” he said. “In some countries the people are represented but everyone is allowed to have a say in Swaziland [through the sibaya], not through a representative.”

Though democracy may be defined in different ways, opinions tend to coalesce around two conceptions: electoral (“thin”) democracy and liberal (“thick”) democracy.

International democracy advocacy group Freedom House labels countries that meet minimal democratic requirements as electoral democracies. These are states with: competitive multiparty political systems; near-universal adult suffrage; regular, contested and free and fair elections; and “significant public access of major political parties to the electorate through the media and through generally open political campaigning”. In this sense, democracy is largely procedural; it is founded on a democratic electoral process.

For countries to classify as liberal democracies they need to meet more stringent requirements: in addition to electoral democracy, they need to practice the rule of law and protect civil and political rights and liberties. Such governments are limited and accountable, and power is divided between the executive, legislature and judiciary.

It is widely accepted that a combination of procedural and liberal elements of democracy is necessary for “true” or substantive democratic practice to exist. 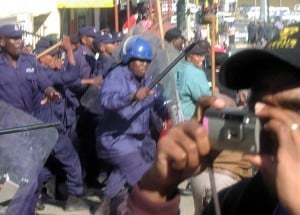 According to Freedom House, Swaziland is not an electoral democracy: the country is  an absolute monarchy, with King Mswati III holding complete authority over all branches of government.

Fifty-five of the House of Assembly’s 65 members are elected by popular vote through the tinkhundla (local council) system, in which local chiefs who traditionally answer to the monarch are required to vet all candidates prior to election. The king appoints the remaining 10 parliamentarians.

The monarch also appoints 20 of the country’s 30 senators (the remainder are selected by the House of Assembly). Parliamentarians are not allowed to initiate legislation, and only the king is empowered to sign bills that parliament has passed into law.

At the judicial level, too, the monarch’s authority is absolute. Judicial powers are vested in the king, who appoints judges through his appointed Judicial Service Commission, a practice that runs contrary to international norms of judicial independence.

In 2011 Chief Justice Michael Ramodibedi introduced restrictions that made access to the courts difficult or impossible for civil litigants in cases in which the king is a defendant. Ramodibedi based his decision on Section 11 of the Constitution, which shields Mswati and his office from civil or criminal proceedings.

According to Amnesty International’s 2013 World Report, citizens’ access to justice was hampered in the preceding year by pressures on judicial independence. 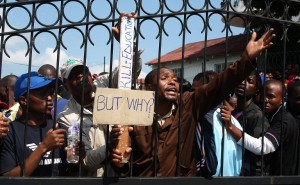 Though the people of Swaziland are able to voice their opinions at the sibaya, it is unclear how effective this is a means of bringing about meaningful political change.

During the August 2012 sibaya, the people made submissions that were highly critical of government and called for change, including the sacking of cabinet and the transformation of the system into multiparty dispensation ahead of the 2013 elections. Of significance, these critical submissions were not made only by the leaders of the pro-democracy lobby; ordinary Swazis from rural areas also voiced such opinions.

Yet Swaziland remains a no-party system.

In a March 2013 review by AfriMap and the Open Society Initiative for Southern Africa, Lomcebo Dlamini noted that Swaziland’s no-party system of governance was “manifestly undemocratic”.  Section 79 of the 2005 Swaziland Constitution suggests that the country follows a democratic and participatory system based on the tinkhundla. This emphasises devolution of power from the centre to tinkhundla constituencies and “individual merit as a basis for election or appointment to public office”.

However, the focus on “individual merit” precludes political parties from entering the electoral contest, according to Dlamini. This, despite Section 25’s guarantees of freedom of association and assembly, which would seem to support the right of individuals to establish and join political parties to further their interests.

“It is as if the right to form political parties is given with one hand and taken away by the other,” Dlamini noted. 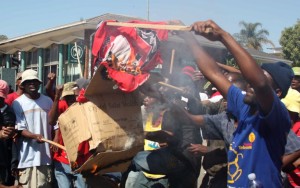 The constitutional rights to free expression and freedom of the press and other media are severely restricted in practice, especially with respect to the dissemination of information around political issues.

The king has the power to revoke constitutional guarantees to freedom of expression and freedom of the press at his discretion. Publishing criticism of the royal family is banned and self-censorship in the media is thought to be widespread, as journalists are routinely subject to threats and attack by the authorities.

The Media Institute of Southern Africa’s 2012 So this is Democracy report highlighted how government had tightened its grip on the media, while Reporters Without Borders’ 2013 Press Freedom Index ranked Swaziland at 155 of a possible 179.

Outside of the procedural elements of democracy, the Swazi government has restricted particular rights and liberties. The freedoms of assembly and association and permission to hold political gatherings have often been denied, despite constitutional guarantees to the contrary.

The Global Week of Action for Swaziland is a case in point. The September 2013 event – a week of protest for greater democratic and workers’ rights in the country – drew foreign solidarity figures such as South African Methodist Bishop Paul Verryn and former South African cabinet minister and Congress of South African Trade Unions General Secretary Jay Naidoo.

Africa Think Press reported that the state’s response to the pro-reform event activists was swift. Vincent Ncongwane, General Secretary of the Trade Union Congress of Swaziland, was arrested by 10 policemen as he prepared to lead his members in protest. No warrant was produced. Verryn and Naidoo were among others who were also detained and questioned.

Police have also dispersed religious gatherings advocating democracy. In February 2013 the democratic opposition to the king’s rule – led by the Swaziland United Democratic Front and the Swaziland Democracy Campaign – organised a prayer meeting in the Bosco Skills Centre in Manzini. Verryn and Mafika Dlamini from the South African Council of Churches were to deliver a “national prayer for a people’s government”, but the event was broken up by Swazi police. Police broke up a similar event at a Lutheran church in 2011.

Swaziland fails to meet any standard of democracy 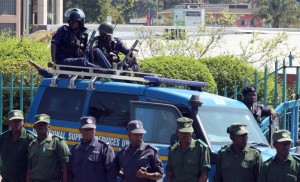 On liberal democratic measures – those most often used to determine the democratic legitimacy of a government – Swaziland fails to meet the standard of democracy: that executive, legislative and judicial power is vested in the monarch defies the liberal democratic separation of power. Furthermore, state encroachment on civil and political rights and freedoms is contrary to the dictates of democracy.

On a procedural or electoral measure, too, the state fails to conform to democratic standards. Though a public voice is encouraged through the sibaya, the ban on political parties – and restriction on political information available – means there is no competitive democratic space in which the people of Swaziland can participate meaningfully in organised politics.

Vuyisile Hlatshwayo is national director of MISA Swaziland and director of The Nation Magazine. 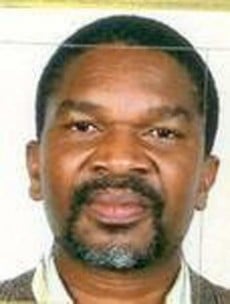