Skip to main content
Back to Africa Check
fact-checking
media

Russian and Ukrainian media have been filled in recent weeks with “outrageous rumours… reported as fact,” all part of the “dehumanisation of the enemy that usually precedes civil war,” wrote the Guardian journalist Shaun Walker in early May.

In 2008, claims circulating unchecked in South African townships about foreigners “getting all the best jobs” or being involved in unsolved crimes, led to a wave of xenophobic attacks that left more than 50 people dead.

Five years before that, false statements unchecked by the media about a polio vaccination campaign in northern Nigeria caused the campaign to collapse and, with it, the hopes of eradicating a disease that has since then resurged in that part of the world.

Fact-checking has, in theory at least, always been a central part of journalism.

The fact-checking departments of the New York Times and Der Spiegel are well known, teams of researchers contacting field reporters to verify the claims made in their reports.

But, if we are honest, fact-checking has rarely been given the importance it deserves by the leaders of our media. The greater kudos, and resources, have always gone to the frontline correspondents or political commentators, the sports analysts or top radio presenters.

Up until recently the “Global Fact-Checking Summit” which is due to take place in London on June 9-10 might have been expected to have all the pull, in the industry, of a “Worldwide Conference of Actuaries”. But things are now changing.

Independent fact-checking organisations developed a little over a decade ago in the United States. The best known is Politifact.com, which in 2009 won a Pultizer Prize for its work verifying claims in the 2008 presidential election.

“We see our job as not just to report what people say, but to apply the bullshit test,” a researcher at another fact-checking organisation told me recently. If you just report what public figures say, whatever spin they put on the facts, you are doing the spinners’ job for them. “Exposing this is the most important thing we do,” he said.

In the 18 months or so that Africa Check has been operating, we have taken runner-up awards in two major journalism prizes, have been profiled at length in the Economist and the New York Times, and our reports have featured in numerous newspaper, radio and TV debates across Africa - helping in a small way, we hope, to change the terms of public debate, first in South Africa and now in Nigeria.

Earlier this year, the team ran a series of major reports fact-checking the pre-election claims of the two main political parties – the ANC and the opposition DA – to provide voters with a non-partisan review of the claims and counter-claims both were making.

This has all been done with a (great) team of three full-time staff, the support of the AFP news agency's non-profit media training arm, the AFP Foundation, our partners at the Journalism Department of the University of the Witwatersrand in Johannesburg, South Africa, and financial backing from international donor organisations including Google, the Open Society, the African Media Initiative, Konrad Adenauer Stiftung and the Omidyar Network.

And with more than 100 reports produced and almost a million visits to the site in that time, it is having an effect. 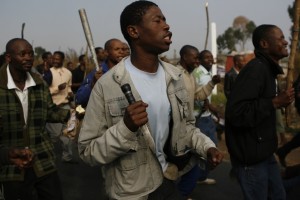 “I was at a strategy meeting before the recent elections,” a consultant to one of the political parties told me this month. “They were really worried when they found out you were fact-checking their election claims. They take you guys seriously. They decided and now an order has gone out that, before they put out claims now, they have to think if it will pass the Africa Check test,” he said.

Does this matter? And is it journalism? Absolutely it does and certainly it is.

For years, many of us in the media industry have peddled the line that it is ok to simply report what public figures say, right or wrong, and to not seek to examine their claims and explain to the reader or listener what we know about whether the claim is correct, misleading or plain wrong.

To me, this is passing the buck while knowing that, while some false claims don’t matter, some that go unchecked can lead to conflict in places such as eastern Ukraine or South Africa, and the resurgence of diseases that were once on the run, such as polio in northern Nigeria.

It is not that it is easy. Often, depending on the context of the report, and the media a journalist is working for – on a live radio link or hitting a newspaper deadline – all that can be done is to poke holes or raise concerns, noting that the public figure who has just made a claim has not provided any evidence for it, or that the evidence appears to be questionable.

Sometimes, though, we can do more and show a plausible claim to be either misleading or outright false, or a contentious claim to be true.

Either way, it is a fascinating and fast-developing part of journalism, enabled by the web, and helps make journalism as a whole stronger. And, for me, it is the most interesting thing I have been involved in, in years.

At the London Fact-checking Summit, there will be fact-checkers from the embattled streets of Egypt and Ukraine, mingling and debating the rights and wrongs of using anonymous sources and the challenges of distinguishing fact from fiction when the best available data is unreliable, and doing so with their counterparts from the US, Argentina, the UK, France and South Africa.

In recent days, Africa Check has run our first reports from my favourite haunt, Nigeria, and hope next year to create a section of the website in French, in Senegal, and add reports from elsewhere after that. Each new step will bring its own challenges and, we hope, change journalism in those countries.

The “Global Summit of Fact-checkers” still doesn’t sound exciting. When I say it, it still sounds to me like the ‘World Conference of Actuaries”. But believe me, it’s a lot more exciting than that.

The global boom in political fact-checking

Lessons from London: Fact-checkers have passion but need more cheques

Can fact-checking be crowd-sourced?

Making a difference? A critical assessment of fact-checking