FACTSHEET: Africa’s single air market - getting from A to B without going via Z

Published on 29 January 2018
Air travellers on the African continent often tell of agonising journeys. Flying the 1,130 km route between Freetown, Sierra Leone, and Banjul, Gambia, takes up to three days, instead of an hour, a BBC journalist found.

By Umaru Fofana’s estimation, it was far quicker - but costlier - to first fly to Belgium.

To solve this, African countries are again attempting to open up the continent to the freer movement of people and goods with the unveiling of a single African air market.

Under a single market, airlines from the region would be allowed to connect any two African cities, without having to go through their home hub first. South African Airways could, for example, fly Johannesburg-Nairobi-Cairo on the same trip and Ethiopian Airlines could go to Nairobi and Johannesburg in a single trip.

African Union officials reportedly expect benefits to be apparent in the next few months, with fares falling by as much as 30%. The single market would strengthen the continent's airlines with much of the region's traffic currently being lost to non-African carriers, SAA spokesman Tlali Tlali told Africa Check.


"Should [it] be implemented in the manner that it has been envisaged it will enable not only SAA but other African carriers access to markets that have previously not been possible due in certain cases to the "restrictive" nature of the African continent," he said.

The airline already had "the key provisions" of the newly-launched deal with 20 of the 22 member states, Tlali added. "Should SAA intend to fly to any of the 22 African states where it does not currently operate, there would be a waiting period, based mainly on the actual regulatory requirements in place in the respective states."

“Airlines will be able to match demand. For customers, they will have more benefits because they will get as much services at a time they want, where they want,” Tewolde GebreMariam, the chief executive of Ethiopian Airlines told Reuters news agency, adding that prices would also drop. 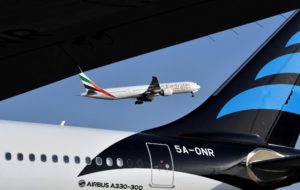 An Emirates Boeing 777 aircraft takes off from the Felix Houphouet-Boigny Airport in Abidjan in November 2017. Photo: AFP/ISSOUF SANOGO" />

African leaders gave their backing to the plan in 2015, committing “solemnly” to immediately implement what are known as the two Yamoussoukro agreements.

Named for the Ivorian city in which they were agreed on in 1988 and 1999, the later Yamoussoukro Decision is the more expansive. The agreements were meant to open up African skies to competition and reduce aviation red tape.

But those deals have stalled, with states continuing to restrict their air markets to the advantage of domestic carriers. This has led to high fares and low air traffic growth, in addition to hurting the region’s safety record, a comprehensive 2010 World Bank study found.

Another 21 are still weighing up membership, the bloc said. (Note: To be part, a state is required to write to the AU informing the bloc that it will fully implement the single market.)


‘Everyone protects their domestic markets’


The resulting changes to how the continent flies could be far-reaching, Jane Karonga, the economic affairs officer at the Economic Commission for Africa, told Africa Check.

“The single most visible change will be increased air connectivity as new carriers enter the market,” she said. The single market will also allow airlines to be more efficient, growing intra-African traffic. The region currently has only a 2.2% share of global passenger traffic, according to the International Air Transport Association.

Supporting industries such as tourism and shipping will also benefit immensely, Karonga said, helping the push for a continental free-trade area.

But to get there, the remaining member states need to opt in. The single market was initially set to be launched in June 2017, but has been hampered in part by the slow sign-up by members.

The norm is that “everyone protects their domestic markets. So much so, that even the Open Skies agreements [of liberalisation] don’t touch domestic markets,” Heinrich Bofinger, a senior transport economist with the World Bank, told Africa Check.

Member states must overcome the “national pride phenomenon over flag carriers”, Bofinger said. This includes reviewing the economic viability of airlines and avoiding white-elephant projects such as gleaming new but under-used airports, he said.


Protectionism has taken many forms, Karonga said. These include restrictions on frequencies and capacity, type of aircraft operated, volume of traffic to be carried and routes to be served.

“Protectionism is often motivated by fear that the national flag carrier will be unable to compete with the continent’s larger carriers, as well as intercontinentally,” Karonga said. “For example, in 2013, it took the collapse of Air Malawi for Kenya Airways to be allowed to operate between Malawi and other countries.”

With the expected boom in airlines and connectivity, more professionals in the airline industry will also be needed, Nilesh Somaia, a director at Nairobi-based regional airline Aircraft Leasing Services, told Africa Check. He cited the difficulty in getting work permits and “pilot drain” as key issues, further pinning this to state restrictions.

“Africa must ensure that it retains or attracts professionals that it requires to support the growth of the aviation industry,” Somaia said. “There are no major benefits to protectionism.”

With liberalisation, investors can exploit opportunities in the secondary markets, such as tourism and cargo, the AU’s transport and tourism chief David Kajange told the UK’s Financial Times at the launch.

“The cost-benefit analysis of protecting a few jobs compared with the total economic benefits of opening up is just not there.”