Some popular claims about antioxidant-rich diets seem almost miraculous, with benefits that include curing cancer or preventing aging. How can you assess dodgy or suspicious claims on the topic and protect yourself?

Africa Check has an archive of fact-checks about the powers of antioxidants. We’ve debunked claims that antioxidants found in jackfruit, eggplant, and rooibos tea can prevent cancer while those in turmeric supposedly prevent brain damage by removing toxins from the brain.

But antioxidants can be beneficial. So how can you tell the difference between the facts and false health advice on this pervasive topic? This factsheet explains what free radicals are and the role played by antioxidants.

Atoms: building blocks of the world

Everything in the world is made up of atoms. These are tiny particles made up of other particles called protons, neutrons and electrons. The last of these, electrons, are most important when discussing free radicals.

When atoms join together they form molecules. For example, a water molecule (represented by the molecular formula H2O) is made when two hydrogen atoms (H) and one oxygen atom (O) are joined.

Atoms also join to make complex molecules like the proteins that make up much of our bodies, the DNA that stores our genetic information and the chemicals we use to digest food.

Atoms are most stable when their outer electrons are in pairs. Because of this, atoms often bond together by “sharing” electrons. One atom with an electron that is unpaired can share it with another atom and form a stable bond.

Free radicals are typically formed when an atom or molecule gains or loses an electron so that its electrons are not in stable pairs. They are created as a normal product of energy production in our cells, but can also be caused by environmental factors like tobacco smoke or radiation such as ultraviolet light from the sun.

The “stronger” free radical will then “steal” an electron from another molecule to re-pair its electrons. This process is called “oxidation”, although it doesn’t need to involve an oxygen atom.

This can damage the molecule the electron was taken from, changing its shape and making it behave differently. This molecule (which is oxidised) may steal electrons from other atoms or molecules to make up for the one it lost. This causes a “cycle of oxidation”, where molecule after molecule is oxidised and then goes on to oxidise another.

According to Dr Helmut Sies, a professor at Heinrich-Heine University in Germany and a senior scientist at Leibniz Research Institute for Environmental Medicine, free radicals “are necessary for normal metabolism”. But they can cause damage when their levels increase.

For example, free radicals can damage the DNA that stores a person’s genetic information. This is thought to contribute to cancer as well as accelerate aging.

Because free radicals aren’t always damaging, oxidative stress is often defined by “an imbalance between oxidants and antioxidants”. So, what are antioxidants, and can they prevent the damage caused by free radicals?

Antioxidants: helpful, but not magic

The term “antioxidant” is used for a broad range of chemicals involved either in the process of repairing oxidative damage, or regulating oxidative stress.

They do this by “donating” electrons to free radicals (molecules with unpaired electrons) and neutralising them. This prevents them from stealing electrons from important molecules in the body. Through this process they can undo the damage done by oxidation, or stop a cycle of oxidation from continuing. Because of this, antioxidants are sometimes called “free radical scavengers”.

According to Harvard University’s school of public health, there are “hundreds, probably thousands, of different substances that can act as antioxidants”.

Not all antioxidants work in the same way and they aren’t all interchangeable. Harvard writes: “Some substances that act as antioxidants in one situation may be pro-oxidants ­– electron grabbers – in a different situation.”

Experts, like those at the United States’ National Center for Complementary and Integrative Health, typically recommend avoiding antioxidant supplements. This is because they can contain far greater amounts of antioxidants than recommended to stay healthy.

Instead, a balanced diet with several daily portions of fruits and vegetables should be enough to provide the antioxidants a person needs.

Free radicals and oxidative stress are thought to be one major cause of cancer. But this doesn’t mean that a diet rich in antioxidants can prevent cancer.

The United States National Cancer Institute explains that antioxidants have been shown to minimise the kinds of free radical damage associated with cancer. But studies of the benefits of antioxidant supplements or antioxidant-rich diets have not been promising.

Studies conducted on cells in a test tube (called in vitro studies) have indicated that there may be a link between certain antioxidants and a decreased risk of developing certain cancers. But large scale clinical trials on humans generally show no benefits.

There is also evidence to suggest that antioxidants can interfere with cancer treatments. Therapies like radiation therapy and chemotherapy often rely on oxidative stress to kill cancer cells, and antioxidant-rich diets may protect these cancer cells from harm.

A 2008 review of literature recommended against using antioxidant supplements in conjunction with cancer treatments “because of the possibility of tumour protection and reduced survival”. A 2017 review did not caution against their use, but found “a clear lack of consistent data supporting the use of antioxidants in cancer prevention and treatment”.

While it’s thought that oxidative stress may be one of the factors that cause aging, this isn’t the only theory. And even if free radicals are to blame for aging, there is little evidence to show that antioxidants help to slow the process.

The oxidative damage theory of aging was first proposed in the 1950s and is based on two concepts. First, that damage due to oxidative stress (especially to DNA) builds up over time, causing degradation associated with aging. Second, that oxidative stress can cause conditions like cancer, cardiovascular disease and arthritis, which may accelerate aging.

But after many years of study, it still isn’t clear how much of a role free radicals play in this process – if any. And there are several other theories of aging that don’t involve free radicals.

How to assess claims about antioxidants and free radicals

Antioxidants and free radicals are complicated. As a result, they are regularly the topic of dodgy or suspicious health claims. How can you assess claims like these? 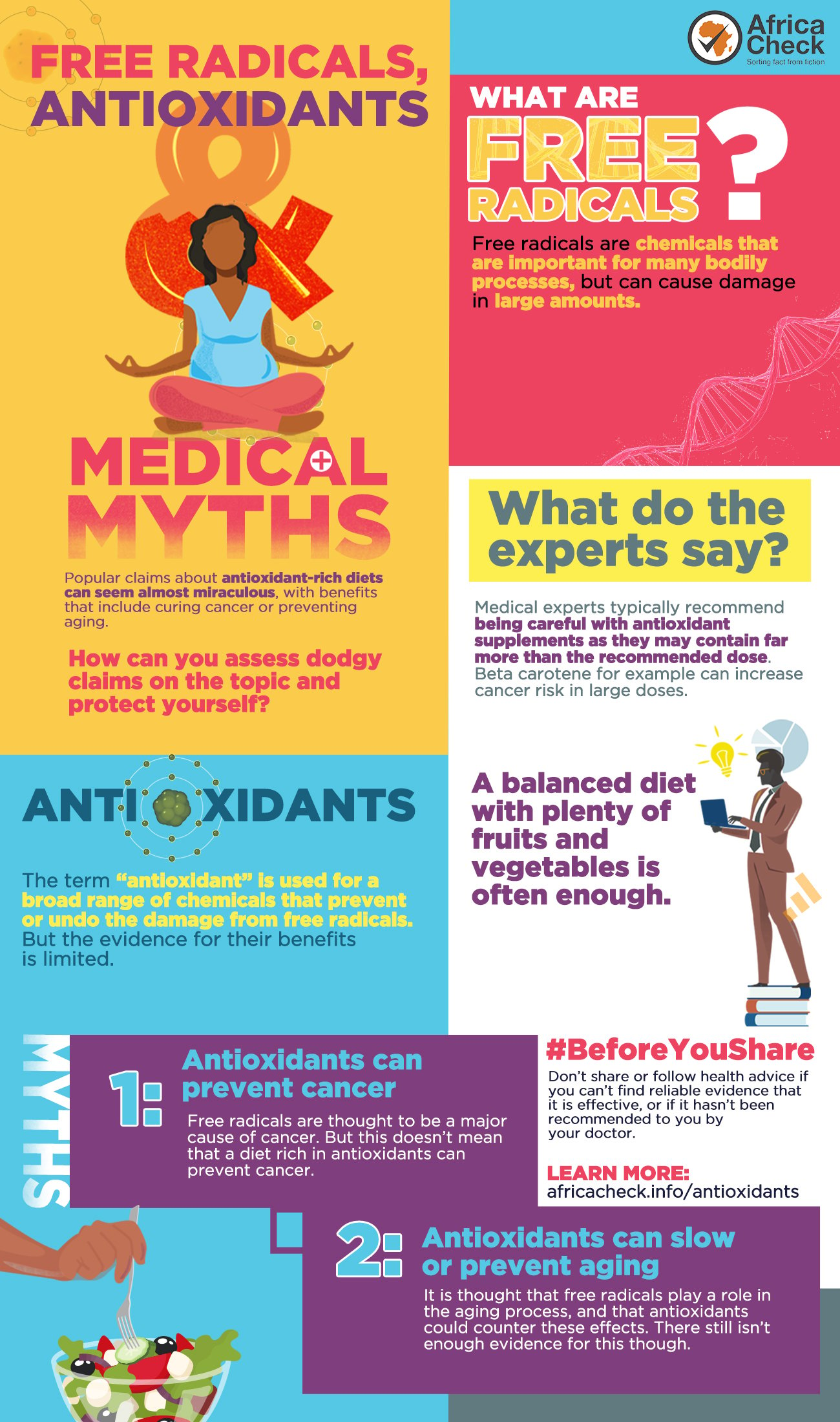