The claim by Nigerian statisticians that the country’s unemployment rate nowadays stands at less than 10% was met with scepticism.

"My reaction is simple: I don't believe the statistics of the National Bureau of Statistics,” a union leader told the newspaper Leadership. And in a report headlined “Outraged Nigerians blast govt over 6.4% unemployment claim” the head of an international development organisation criticised the figures. “This is a very unserious way to deal with a national problem,” Hussaini Abdu from PLAN International was reported to have said.

The comments followed the announcement in May by Nigeria's National Bureau of Statistics (NBS) that unemployment stood at 6.4% for the final quarter of 2014 in Nigeria and had increased to 7.5% for the first three months of 2015.

At the press briefing the head of household statistics at the NBS, Isiaka Olarewaju, acknowledged that Nigeria's unemployment figures have “been heavily criticised in various quarters, either for being too high or too low”.

So are they indeed too high or too low? This factsheet takes a look at how Nigeria’s employment statistics are calculated and how this has changed.

How the data is gathered


Controversy over survey data in Nigeria is not new. (Read our report on the country’s contested census figures.)

At the heart of the current debate are changes the NBS made in how unemployment is measured and the argument over whether these make it more or less meaningful than before.

At the beginning of 2014, the NBS started collecting employment data quarterly. Their labour force survey is carried out over three weeks, covering 133,200 households across Nigeria's 36 states and federal capital territory. At an average of 5.7 persons per household, the total sample size comes to about 800,000, Nigeria's statistician general, Dr Yemi Kale, told Africa Check.

The NBS methodology requires that half of the respondents in a particular quarter are resurveyed in the next one, so as to track employment trends as accurately as possible.

People are considered unemployed when they are:


People who choose to stay at home, are full-time students, or are ill and unable to work, are not counted as unemployed. 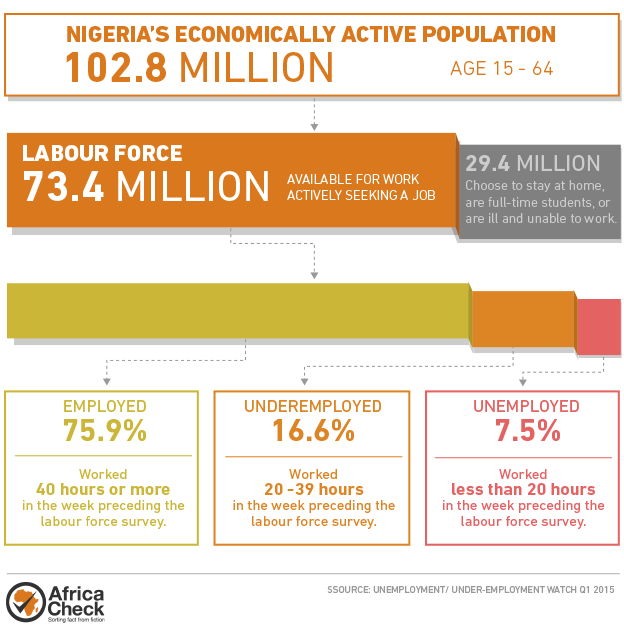 What counts as full-time employment changed


The controversy over Nigeria’s unemployment figures centres on the number of hours which a person has to work each week to be considered fully employed.

This measure varies from country to country. The International Labour Organisation’s benchmark is an hour a week and this is used to compile employment statistics in South Africa and Zimbabwe, for instance.

In Nigeria, a benchmark of 40 hours per week was adopted in 2001 by the National Consultative Committee on Statistics. This means that people were only counted as “employed” if they have worked 40 hours or more in the week preceding the labour force survey.

The NBS reviewed the 40-hour benchmark in September last year, however, saying it “has been described as outdated, both by local and international partners, and inconsistent with present realities in the country.”

The statistics agency consulted government agencies, universities, researchers and others and agreed on 20 hours per week - half-way between the ILO approach and the former Nigerian measure - as the new benchmark.

The head of a Lagos-based financial advisory and market intelligence firm told Africa Check that the NBS “appears to be really serious about the integrity of its data... [The changes] may not be perfect, but is far better than what we used to have," Femi Awoyemi of Proshare said.

But he pointed out that Nigeria’s contested census figures will always undermine the accuracy of surveys that seek to be representative of the population as a whole, such as the labour force survey.

"In a country without an exact idea of its population, discussing these other numbers is a problem,” said Awoyemi.


Other changes - an ‘underemployment’ category


In addition to changing the way it calculates employment, the NBS also introduced a new measure calculating “underemployment”.

Labour force data was previously presented in binary terms: the number of employed people versus the number of unemployed. With the revision, people working between 20 to 39 hours a week are listed as “underemployed”.

This shifts a large part of Nigeria's previously “unemployed” into the ranks of the “underemployed”, resulting in a much lower unemployment rate.

Take the first quarter of 2015. A total of 55.7 million people (75.9% of the labour force) was counted as employed and 5.5 million people (7.5%) as unemployed. The last figure appears low mostly because a further 12.2 million people (16.6%) - who would have been deemed “unemployed” under the old stringent benchmark - are now classified as “underemployed”.


What the underemployment rate reveals is that Nigerians are working but not necessarily in high productivity or formal sector jobs.

“As in many other developing countries, most Nigerians cannot afford to be completely unemployed,” the World Bank said in its 2014 country economic report, which predated the methodology revision by two months. “Those without good productive employment therefore typically engage in various low productivity and low paying tasks for survival.”

The head of a Lagos-based strategy consultancy agreed. Opeyemi Agbaje told Africa Check: “The real problem we have is more likely to be underemployment, rather than unemployment.” He added: “You're unlikely to have a Nigerian graduate sitting at home doing absolutely nothing. He will [conduct tutorials], sell mobile recharge cards or be an airport tout.”

And the latest statistics suggest the pattern is continuing. Between 1.2 and 2.2 million young Nigerians join the labour force every year, but of the 469,070 new jobs created in the first quarter of 2015, more than two-thirds were in the informal sector. – 2/7/2014