South Africa is often a destination for LGBTI+ people fleeing discrimination in other African countries. This factsheet looks at laws affecting these communities across the continent.

Despite these concerns, the organisation noted that South Africa is often a destination for LGBTI+ asylum seekers. The HRW made a submission on this topic to the country’s justice department.

“Across the continent, discriminatory laws and hostile social attitudes lead many LGBT people to flee their countries of origin and travel to South Africa to seek asylum and to pursue a better, more secure life,” HRW said.

How has the situation changed since then? This factsheet updates the numbers. It also looks at which African countries allow transgender (trans) and intersex people to change the gender marker on their identity documents.

In Egypt the association found that “even though there are no laws explicitly criminalising consensual same-sex sexual acts, other laws are used in practise to arrest, prosecute and convict people of diverse sexual orientations and gender identities”. This was referred to as “de facto criminalisation”.

Western Sahara, a contested territory, is not a UN member state but is a member of the African Union. It was not included in the ILGA report. The territory is claimed by both Morocco and the Polisario Front, a political and military organisation seeking independence.

The Moroccan penal code criminalises same-sex sexual acts. The constitution of the Sahrawi Arab Democratic Republic, Western Sahara’s government in exile, guarantees certain rights “without any discrimination”, including according to ethnicity, gender and religion, but not specifically sexuality.

Where are same-sex relations legal in Africa?

But ILGA noted that “legality of same-sex sexual acts cannot be read as evidence of a safer living environment for people with diverse sexual orientations or gender identities or expressions”. There are also other legal barriers to recognition of LGBTI+ people in most African countries.

Same-sex marriage, for instance, is legal only in South Africa of the 54 states assessed by ILGA.

And only three states – Angola, Mauritius and South Africa – explicitly prohibit discrimination on the grounds of sexual orientation. This, the ILGA said, was “of key importance to effectively protect people from discrimination”.

Which African states allow people to change their gender on legal documents?

The ILGA published a Trans Legal Mapping Report in September 2020. This report detailed the impact of laws and policies on transgender and gender diverse people around the world.

While many African countries do not directly criminalise transgender and gender diverse people, many do so indirectly through indecency laws, criminalisation of same-sex relationships and impersonation laws.

A slightly clearer legal issue which the ILGA tracks is whether a country allows transgender or intersex people to alter official documents to match their gender identity. This is also a legal issue HRW highlighted in its submission to the South African justice department.

Only two African countries – Namibia and South Africa – explicitly allow for a change of gender marker on official documents.

The Namibian Births, Marriages and Deaths Registration Act 81 of 1963 allows for “any person who has undergone a change of sex” to alter their official sex on their birth register. According to the Southern African Litigation Centre, this also allows a person to apply for an updated identity document and passport.

Although the act does not define “change of sex”, applications typically require “medical reports” of transition. The ILGA called Namibian requirements for gender marker change “prohibitive” and the act “largely inaccessible”.

South Africa’s Alteration of Sex Description and Sex Status Act allows intersex people, as well as “any person whose sexual characteristics have been altered by surgical or medical treatment or by evolvement through natural development resulting in gender reassignment”, to amend their birth register.

South African organisations Gender Dynamix, a non-profit aiming to advance transgender human rights, and the Legal Resources Centre (LRC) noted that there were shortfalls to this act, including the fact that it “notably fails to make any provision for people who wish to be identified as neither male nor female”.

The ILGA also noted that change of gender marker was possible “with unclear and prohibitive requirements”. HRW, in its justice department submission, called the process “inadequate”.

Despite this the act has been hailed as “a move forward for transgender persons in South Africa” by Gender Dynamix and the LRC.

In Zambia it is possible for an intersex person to change their gender marker on legal documents under Zambia’s National Registration Act 19 of 1964, though the process requires extensive medical tests which may not be available in the country.

In Kenya and Botswana there is no official provision for altering gender markers on official documents but there is legal precedent for it. This means that it has been allowed in the past which might guide future legal decisions.

Kenya allowed a trans woman to remove the male gender marker from her secondary education certificate in 2014 (though it is unclear which other legal documents this precedent could be applied to).

Botswana created legal precedent in 2017, when the country’s high court ruled that a trans man could change the gender marker on his identification card. This has allowed other trans people to do the same.

In the 50 remaining African countries, it is either impossible for transgender or intersex people to amend official documents, or it may be possible but there appears to be no legal precedent for doing so.

As with same-sex relationships, legislation allowing people to amend official documents may not reflect the treatment of transgender or intersex people in a particular country. 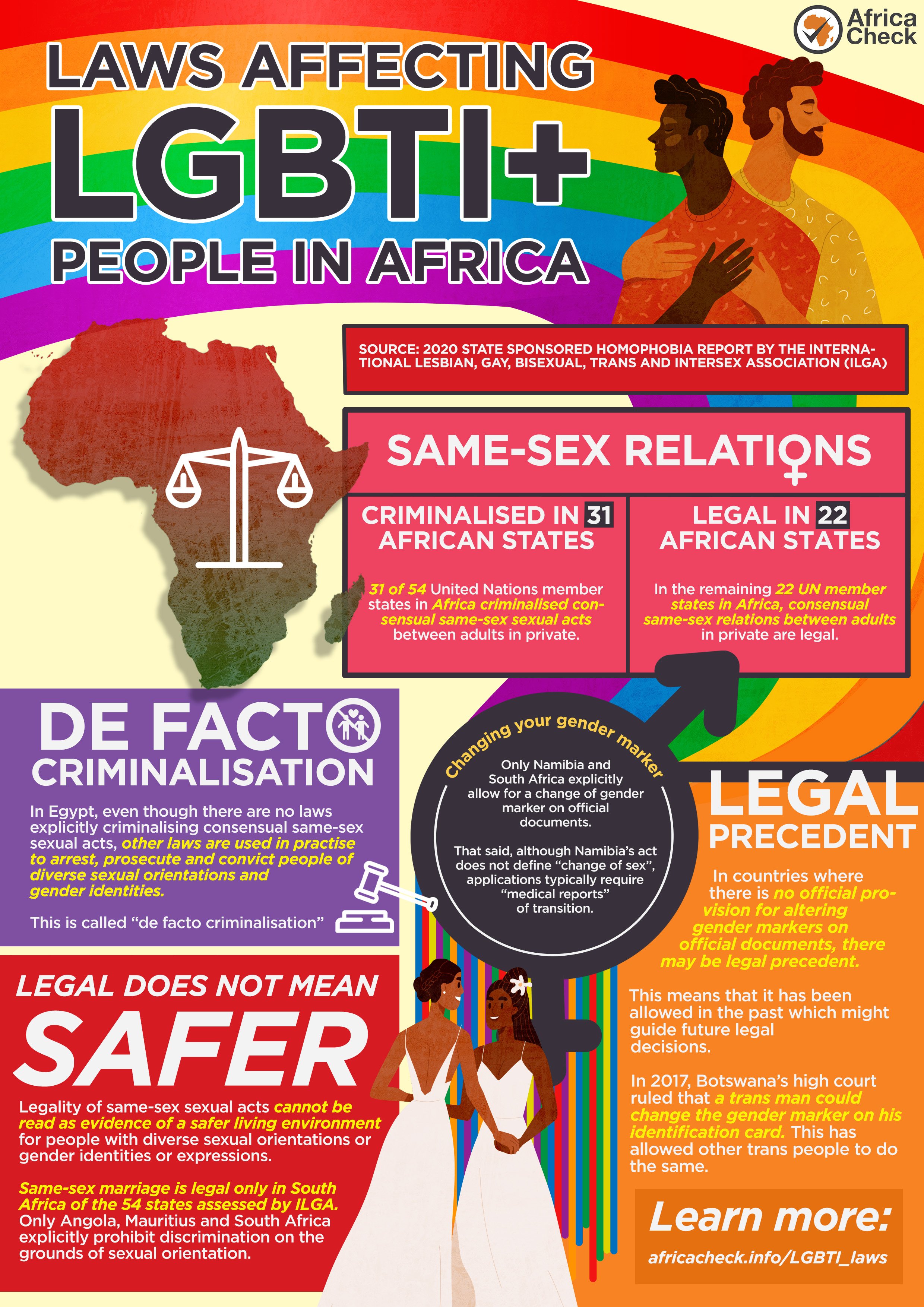 Yes, hippos kill ‘around 500 people a year in Africa’