With a week to go before polling, Nigeria's Independent National Electoral Commission (INEC) on Saturday announced that it would delay planned elections by 6 weeks. The presidential ballot, due on February 14, will now be held on March 28, while the polls for state governors and assemblies have been moved to April 11.

The move didn’t come as a surprise to many in Nigeria who have been watching the ruling People’s Democratic Party (PDP) repeatedly attempt to delay the vote. The respected head of INEC, Attahiru Jega, had resisted earlier calls but finally agreed to put back the date after security chiefs said that they would be unable to provide security for the poll in the north-eastern states worst affected by the Boko Haram insurgency, because that would come at the expense of operations against the militants. "The commission cannot lightly wave off the advice of the nation's security chiefs," he said.

For the first time since the country’s return to civilian rule in 1999, the ruling People’s Democratic Party’s (PDP’s) hold on power is under threat in the vote. But though the All Progressives Congress (APC) electoral challenge is good news for democracy, the high stakes of office in Nigeria, prevailing North-South and religious tensions, and the effect of Boko Haram activities in the North may damage the credibility of the polls and foment violence. This factsheet sets out the issues. 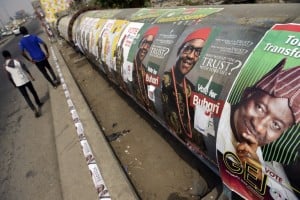 Nigeria follows a presidential electoral system, with a president elected directly by voters in a four-yearly election cycle, with a two-term limit. Elections are held concurrently for the bicameral national legislature, the National Assembly, which consists of the Senate and House of Representatives.

As the country is a federal state, separate elections are held for state legislatures and governors: legislators are elected every four years, while governors are elected for four-year terms, with a maximum of two terms.

Gubernatorial elections will bypass seven states this year, as incumbents who took office once the nationwide gubernatorial term had already started will see out their full four years before elections are held in these states. Nigeria also stages elections for more than 700 local government authorities but these are organised at state level and timings differ.

This is not the first time since 1999 that INEC has delayed a presidential vote. It did so in 2011. But this time around the move comes in the context of a far tighter political race. It met with widespread criticism. The opposition APC described it as "highly provocative" and "a major setback for Nigerian democracy", while the US said it was “disappointed”.

In Nigeria, many citizens saw it as a desperate attempt to maintain power. They theorise that the government is seeking to better prepare a fixed election. So far, however, no law has actually been breached. The country’s constitution requires that a vote be held a minimum of 30 days before the deadline for the termination of the current government, which is May 29. A second delay would be in breach of that constitution.

“By the time we reach the end of 6 weeks, what happens?” asked Abdullahi Omaki of the Abuja-based Savannah Centre for Diplomacy, Democracy and Development. “If the situation has not improved, that will be a constitutional problem.”

Only Jonathan and Buhari, who contested the 2003, 2007 and 2011 presidential elections, are considered serious contenders. 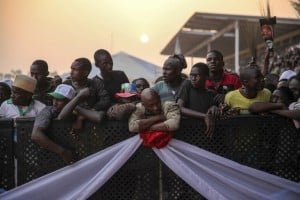 The PDP has traditionally dominated the gubernatorial and presidential elections, but this year the APC seems to offer stiff competition. The party was formed through the 2013 merger of four opposition parties – the Action Congress of Nigeria, Congress for Progressive Change (CPC), All-Nigeria People’s Party and a faction of the All Progressives Grand Alliance.

In the 2011 presidential election, the parties that now comprise the APC together garnered roughly 15-million presidential votes (roughly 40%), to Jonathan’s 22.5-million (about 59%). As the CPC candidate in 2011, Buhari, a tough-minded military ruler who came to power in a coup in the early 1980s, claimed 32% of the vote, with 96.9% of his support coming from a Northern constituency. With the APC ensuring a broader geographic support base in the 2015 election, Buhari’s support is likely to grow.

The rise of the APC, which is focusing its campaign on insecurity and corruption, comes at a bad time for Jonathan. He is said to have lost support through government graft scandals, high unemployment and his management of the Boko Haram insurgency in the north-east of the country. Falling oil prices also threaten the country’s economy: the naira has suffered and civil servants have reportedly not been paid. His election campaign is based on a “transformation agenda”, a multi-pronged programme that aims to diversify the economy, boost output and generate employment.

With the high rewards of office at stake in any Nigerian election, the politicisation of regional and religious identities, and fall-out from the Boko Haram insurgency, many commentators fear that violence and diminished voter turnout – through displacement and delays in distributing biometric voter cards may affected participation – may call the legitimacy of the polls into question. 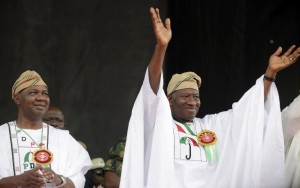 Elections in Nigeria are overseen by INEC. The commission has struggled to ensure credible polls in a country with a history of vote rigging and electoral fraud, though Jega is seen as its most credible top official to date.

The electoral body has put various measures in place to prevent fraud in the 2015 poll. An automated fingerprint identification system will be used to remove duplication of voters, and voters are being issued with biometric voter cards containing name, age, identity number and fingerprints. These will be checked with card readers at polling stations to prevent multiple voting.

In an attempt to minimise ballot stuffing and box snatching, the commission has also customised ballots, result sheets and boxes for each polling station. Trained observers from the Transition Monitoring Group will be present at a representative sample of polling stations to check accreditation, voting and counting processes.

Logistical problems have affected the body’s preparations. In January, with about a month to go before the elections, only 38-million of the country’s 68.8-million registered voters had received their voter cards. By late January, a number of the card readers required for polling stations had yet to be delivered to the commission. 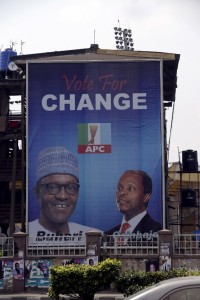 Overlapping North-South and religious tensions have long been a factor in Nigerian politics. Presidential candidates usually select a running partner from elsewhere in the country to broaden their appeal.

The 2015 election pits a Muslim Northern candidate, Buhari, against the Christian Southern president, Jonathan. Buhari therefore picked a Christian Southerner, Yemi Osinbajo, as his running mate, while Muslim Northerner and current vice-president Namadi Sambo is Jonathan’s running partner. Yet this is not sufficient to ensure the elections don’t spill over into violence.

During Britain’s colonial hold over Nigeria, the northern and southern regions were administered separately. In 1954, the Lyttleton Constitution divided the south into western and eastern regions, a move that weakened the region in comparison with the North, which dominated the political landscape until the 1999 elections.

Polarisation between the regions, which have roughly equal populations, means many in the South fear a return to Northern political domination. Many Northerners, in turn, argue they are threatened by the more developed South. Their socio-economic marginalisation fuels grievance: poverty rates are believed to be significantly higher in the North than in the South.

On return to democracy, the North-South division saw the PDP – and other political parties – agree to an unwritten rule by which the presidency would rotate between Northern and Southern leaders every eight years. When Northerner Umaru Musa Yar’Adua died early in 2010, half way through his first term of office, he was succeeded by his Southern deputy, Goodluck Jonathan.

Jonathan inflamed tensions when he stood for office in his own right in 2011, as many Northerners believed one of their candidates should see out the remaining four of the North’s “turn” at eight years. Jonathan’s victory triggered post-election violence in which 800 people were killed.

To the chagrin of some in the North, a Southerner has effectively occupied the presidency for all but three of the past 15 years. For Jonathan to stand for a second term in 2015 is, in the eyes of these Northerners, a further violation of the agreement that carries the threat of marginalisation for the region.

Religion has become an additional polarising force as politicians mobilise support. Buhari, for example, has been portrayed as an extremist seeking to extend Sharia law to the whole country. The APC has also been equated with the Muslim Brotherhood and Janjaweed, and accused of aggravating the Boko Haram crisis.

However, Jonathan has lost support in the South as a result of government corruption scandals, and been sharply criticised for his management of the Boko Haram crisis in the North. With the creation of the APC expanding Buhari’s geographical support base, it seems religious difference may be less important than governance in this election.

What impact may Boko Haram have?

Boko Haram leader Abubakar Shekau fires an assault rifle in the air in a screen grab from the YouTube video in which he claimed responsibility for the Baga killings." />

The insurgency may affect the credibility of the 2015 elections. The logistics of polling in Boko Haram-held territory are unclear, and if elections were to go ahead in these areas, polling stations would be likely targets for the group.

Further obstructing the vote is the issue of the 1-million displaced by the violence. According to current Nigerian electoral law, voters are required to cast their ballots in their home constituencies. Though the legislature and Independent National Electoral Commission have worked around this – and the electoral commission is attempting to distribute voter cards to the internally displaced – they are only able to accommodate those in the 11 displacement camps in the affected states.

Disruption of the vote in the three north-eastern states may also be an obstacle to Buhari. Even if he does have good support in the South as a Muslim and a Northerner, he will be relying, at least in part, on strong Northern support in his bid for power. If the election does not go ahead in Borno, Adamawa and Yobe states – or if voter turnout is significantly reduced by the Boko Haram threat or internally displaced citizens not turning out to vote in sufficient numbers – the APC may challenge the legitimacy of the election.

Popular dissatisfaction with Jonathan (59% of Nigerians strongly disapprove of his job performance), together with his lack of popularity in the North compared with Buhari, will mean that the race will be a close one. According to the constitution, a presidential candidate needs to secure more than 50% of the national vote, as well as at least 25% of the vote in at least two-thirds of the states in order to claim office.

Considering that northern states comprise about two-thirds of the federation’s territories and are likely to support Buhari – and that Jonathan has lost support in the South – it is conceivable that a lack of support for his candidacy could precipitate a run-off election.

Report: Is the Niger Delta the epicentre of electoral fraud in Nigeria?