Controversy over Nigeria’s census figures is nothing new. Accusations that the country’s official population figures had been rigged date back to the 1950s and have continued unabated under military and civilian regimes.

In the run up to independence in 1960 the British authorities were accused of skewing census figures to favour the interests of northern political elite. After independence, the same accusations were made about the seriously flawed 1963 census.

The next official population count, conducted in 1973, was no better. It was officially annulled and no figures were published. After that there was nothing until 1991 when a census was conducted and just as quickly discredited and annulled.

The most recent attempt came in 2006, declaring that the population had reached just over 140 million. But earlier this month the president of Nigeria’s senate, David Mark, publicly complained that the count was not credible. “Every time we talk about statistics in this country… we don’t appear to have the accurate figure,” he said.

Two days later, Festus Odimegwu, the former head of the National Population Commission (NPC) – which conducts the census – gave an interview to the media in which he said that no census in Nigeria’s history has been valid and that trying to count Nigerians was “impossible”.

He claimed that was why he resigned last year after 20 frustrating months (although the presidency insisted he was sacked).


So what are the problems? 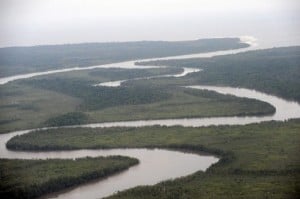 Officials responsible for conducting the headcounts claim the problems are, in part at least, a mixture of the practical and the cultural.

First, there is the problem of difficult terrain – large areas are difficult to reach because of poor roads or, in the case of the Niger Delta region, the watery landscape. There are also cultural sensitivities.

“There is a concept of “Ba Shiga” in the northern part of the country which forbids entry, particularly a male guest from entering the house,” Dr Akanni Akinyemi, a lecturer in demography and social statistics at Nigeria’s Obafemi Awolowo University, explained to Africa Check. That means that enumerators must accept potentially erroneous numbers given to them by the male head of the household.

However, Nigeria is not the only nation where counting is difficult. “Countries all over the world have huge practical problems with census counts,” Dr Deborah Potts, a reader in human geography at Kings College London told Africa Check.

Other highly populated nations such as Indonesia have to tally populations in dense rainforests, but manage alright. And water-laden Bangladesh overcomes its practical constraints.

“There is hardly any terrain which the enumerators can’t reach in Bangladesh,” A.K.M Nurun Nabi, the country’s top population scientist, who is now vice-chancellor of Begum Rokeya University, said.


The bigger problems are politics and money


Instead, the real cause of controversy in Nigeria has always been the influence of politics and money.

The reason the British rigged the pre-independence census figures in the 1950s was reputedly to allocate more seats in parliament to those they favoured in the north, and diminish the political influence of the south.

The censuses of 1963, 1973 and 1991 are also widely seen in the south as having deliberately underrepresented the southern population to justify the distribution of resources to the north.

Today, population size helps determine the share of revenues given out by the central government to the different states, meaning both federal and state authorities have a major financial interest in the census numbers.


Why was the 2006 census controversial? 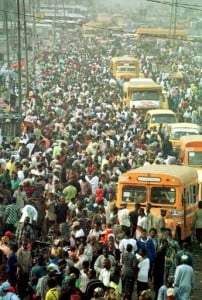 Unsurprisingly, the 2006 census was subject to all the same flaws as before. “There was huge influence from the communities and political class to manipulate the whole processes,” Dr Akinyemi told Africa Check. “In my view, there was a competitive manipulation across many communities and states.”

Arguments and counter arguments since have revolved particularly around the populous Lagos state in the south and Kano in the north.

The former NPC head Festus Odimegwu argued in middle 2014 that politicians tried to undermine the integrity of the count. The 2006 census had found Kano to be the most populous state, with almost 9.4 million inhabitants, followed by Lagos, with just over 9 million.

Odimegwu claimed that when he questioned the result Kano’s governor, Rabiu Musa Kwankwaso, “started running his mouth...that...I am drunk. He made a joke of a serious matter”. Why? Because he was “the biggest beneficiary of the fraud that is the demographic data in Nigeria.”

Exasperated by the results of the 2006 census – and ignoring the fact that, under the constitution, only the federal government is permitted to conduct a population count – the government of Lagos State conducted its own survey the same year. It concluded that the population of the state then was 17.5 million, almost twice the nine million proposed by the 2006 headcount.

J. Adele Bamgbose, a political science lecturer at Lagos State University, said in a paper the official NPC figure for Lagos “did not correlate with any available social parameters such as birth rate, number of houses and physical structures in a given area, vehicular density, children immunisation, waste generation, school population”.


What can we believe? Cross-referencing can help 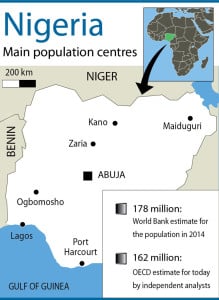 Can any numbers be believed? Experts Africa Check spoke with believe the best way to arrive at reasonable estimates is to cross-reference official figures with more scientific independent studies.

For example, research carried out by Africapolis - the African arm of e-Geopolis, a global study of urban populations, which is supported by the Agence Française de Développement - provided population estimates for settlements of over 10,000 people in West Africa.

The study used a combination of satellite imagery, geographic information systems, and the largest collection of documentation on the region ever collated to come up with its figures. It is “easily the best and most detailed source” on regional urban population, according to Dr Potts.

The organisation believes that 2006 census numbers for Lagos of around 9 million were reasonable and that the state’s own estimates are overblown.

Population growth in the city appears to have been slowed in the 1980s by an IMF-inspired structural adjustment programme, with rising unemployment and higher costs of living driving many back to their cheaper towns and villages, and this has affected the figures, it says.

However the group found the 2006 census figure for Kano city, at 2.8 million, was inflated, suggesting officials had found about half a million more people than Africapolis estimated in 2010.

And UN data, which is based on the 2006 census data, also overestimates the population of several Nigerian cities, Africapolis reported. Cities affected included Abuja, Kano, Maiduguri, Ogbomosho and Zaria, interestingly mostly in the north, lending credence to allegations that northern figures, particularly, are subject to inflation.


So what is the population of Nigeria? 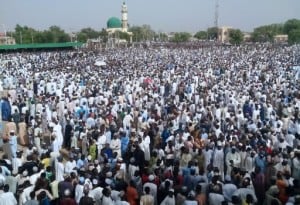 Unfortunately, it is not possible to give a firmly reliable estimate for the total population of Nigeria. The 2006 census cited a population of around 140 million. The most commonly cited figures today are from the World Bank, and they are extrapolated from that headcount. It reports that 168 million people were living in Nigeria in 2012, which on the basis of 3% growth rates would suggest a population of around 178 million in 2014.

But because the census figures are so unreliable, neither senior Nigerian politicians such as Senate President David Mark nor the former head of the organisation that ran that census, Festus Odimegwu, are willing to declare confidence in the last census. Dr Potts agreed that it was “almost certainly an over-count”.

That implies that today’s statistics – taken from faulty figures - are equally misleading.

“These figures are just guesstimates. Nobody knows whether the population is 120 million, 150 million, 200 million – no Nigerian, not the NPC, the UN, the World Bank,” Odimegwu explained to Africa Check. “Unless you conduct a proper census, which has never been done without political interference, it is not possible to know.” 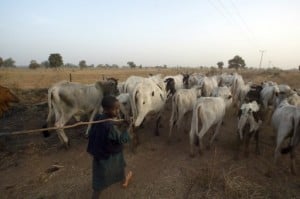 However, it is possible to take a more scientific approach. Based on the Africapolis urban study, it appears to be more likely than not that Nigeria’s population today is lower than commonly cited.

And the Organization for Economic Cooperation and Development (OECD), for one, has taken this into account in its estimates.

“The OECD has adjusted Nigeria's population figures on the basis of the much reduced urban populations estimated by the Africapolis team,” Dr Potts said. “Their calculations put Nigeria's population at 110.1 million in 2000, compared to a UN estimate for that year of 123.7 million.” In a report, the organisation estimated that Nigeria’s population in 2006 was just over 134 million; below the 140 million reported in the census.

“Using a similar growth rate to project the OECD figure to today gives an estimate of around 162 million,” Dr Potts concluded. This assumes that there are no problems with inflation of population statistics in rural regions, which may not be correct, but is still a more scientific approach than taken elsewhere.

For those interested in accurate figures about the population of individual towns and cities, the best way for now to judge appears to be cross-referencing the official estimates with those presented by independent organisations such as Africapolis, which do not have a financial or other interest in exaggerating or underplaying the true numbers. [Last update: 7/10/14]