FACTSHEET: Statistics on farm attacks and murders in South Africa


Attacks on people living and working on farms and smallholdings in South Africa are a topic of emotive debate.

In a 2017 debate in South Africa’s parliament, the attacks were described as “not normal criminality”, “crimes fueled by hatred” and “extremely violent and often accompanied by brutal torturing in the most barbaric way”.

This factsheet sets out the available research on the topic and explores its limitations.

The official definition was formally introduced in 1997/98 and is contained in the police’s 2011 Rural Safety Strategy: 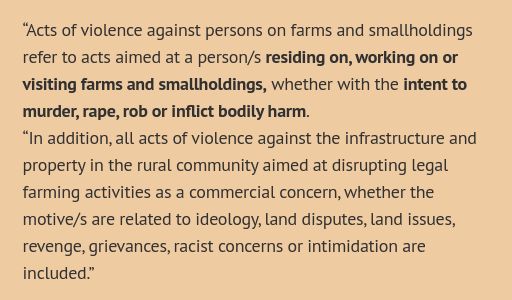 “Indirect acts” - such as intimidation, arson and malicious damage to property - are also included, a 2016 police presentation in parliament showed.

However, violence related to “domestic violence or liquor abuse, or resulting from commonplace social interaction between people” are not included under farm attacks.

There is no official crime category called “farm attack” or “farm murder”, though. The crimes mentioned in the definition - such as murder, rape and assault - are recorded by the police station investigating it.

Police stations are then expected to report incidents meeting the definition listed to head office for inclusion on a separate, stand-alone database, De Beer explained.

A property needs to be involved in agriculture for an attack or murder to be flagged as an act “of violence against persons on farms and smallholdings”, the police’s Rural Safety Strategy states.

A farm is defined as an “area of land and its buildings used for agricultural and livestock purposes, including cattle posts and rural villages where subsistence farming takes place”.

A smallholding is an “agricultural holding that is smaller than a farm”. Smallholdings “where no agricultural activities take place” or those that are “predominantly residential” are excluded from the definition.

Sometimes attacks and murders are reported as farm attacks and murders by the media when they do not meet the police's definition. For example, the murder of two people at a Nottingham Road estate in KwaZulu-Natal in early 2017 was reported in the press as a farm murder. However, the police told Africa Check that it was not recorded as a farm murder because the crime took place on a housing estate and there were no agriculture activities on the property.


The South African police did not collect statistics on attacks and murders on farms and smallholdings prior to 1997.

A number of agricultural organisations did, however. The South African Agricultural Union (now Agri SA) registered 677 murders and 3,065 attacks between 1991 and 1997.

The union “got its information primarily, though not exclusively, from local agricultural societies, and the likelihood is that the emphasis might have fallen on commercial farmers, rather than on, for example, smallholders not affiliated to the agricultural societies”, a 2003 committee of inquiry into farm attacks relayed.

The committee of inquiry was appointed by the commissioner of police in 2001 to “inquire into the ongoing spate of attacks on farms, which include violent criminal acts such as murder, robbery, rape, etcetera to determine the motives and factors behind these attacks and to make recommendations on their findings”.

Because of the emphasis on commercial farms, the committee doubted if “all attacks on other farm residents, which may now qualify as a farm attack in terms of the definition, would have been included in their statistics”.

In 1997, the police’s Crime Information Analysis Centre (CIAC) began collecting data on farm attacks, but told the 2003 committee of inquiry that it did not believe that every crime was being recorded.

In 1998, farm attacks and murders were made a priority crime with its own priority committee - like other priority crimes such as gang violence, taxi violence and cash-in-transit robberies. The police’s National Operational Coordinating Committee began collecting statistics of their own.

The 2003 committee of inquiry into farm attacks concluded that none of the statistics collected between 1991 to 2001 were completely accurate and should be viewed and interpreted with caution.

The South African police collected and released statistics on farm attacks and murders until 2006/07 but did not release statistics again until 2010/11.

De Beer told Africa Check that “the database is a ‘live’ system, meaning that the statistics derived from it are subject to change if new information on cases emerges. The database is not primarily intended as a source of statistics, but as an operational tool.”  As such, statistics for certain years may change.

According to the South African police, 47 farm murders were reported in 2018/19. They have not released the number of farm attacks.


A number of private organisations and agricultural trade unions collect and publish their own statistics on farm murders and attacks. When citing and interpreting these statistics it is important to check the definition being used to identify incidences. They may differ from the official statistics released by the police.

The institute's report notes that their statistics were collected by monitoring traditional and social media. They also rely on security networks and victims to directly report attacks.

Author of the report and researcher at the institute, Lorraine Claasen, told Africa Check that they record incidences that occur on residential smallholdings and rural plots, which differs from the police’s definition. The statistics are also collated in calendar years, which can make comparisons with other data sets difficult.

The union's assistant general manager, Chris van Zyl, provided Africa Check with farm attack and murder statistics they had collected since 1990. He told Africa Check that they recorded incidents as defined by the police’s Rural Safety Strategy - that being, there have to be agricultural operations on the property.

The statistics, however, were collected by calendar year - not financial year - which makes comparisons with police statistics difficult. The union is in the process of converting them to correspond to the police’s financial year. So far they have converted 2012/13 to 2017/18. 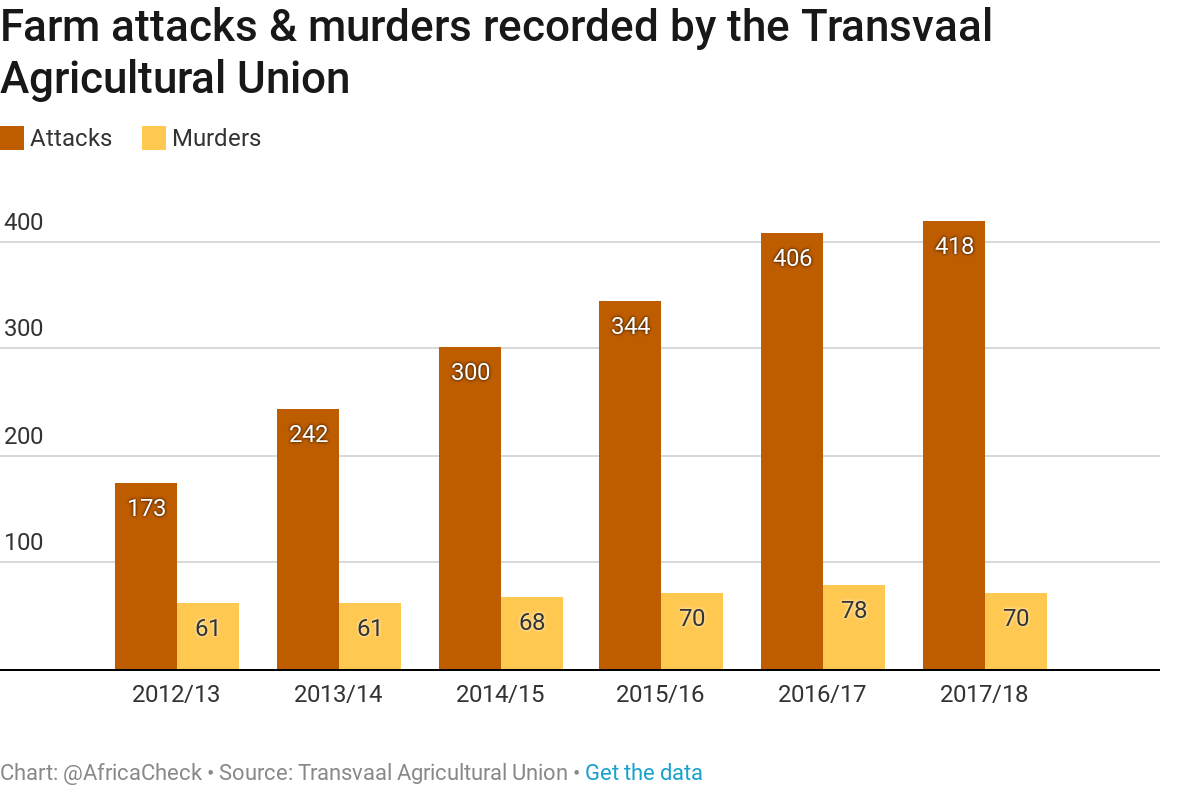 They also provided a breakdown of whether victims were farmers, family, workers or visitors. Van Zyl said that the farmers listed as murdered could be commercial farmers or farmers from non-commercial farms and smallholdings.


Who are the victims of farm attacks?


South Africa's official crime statistics revealed that 46 of the 62 people murdered on farms and smallholdings in 2017/18 were white.

In 2001, the police’s Crime Information Analysis Centre revealed that of the 1,398 people attacked on farms, 61.6% were white, 33.3% were black, 4.4% were Asian and 0.7% were listed as “other”. This data is now more than 15 years old and should not be assumed to be representative of the current situation.

Of the 62 people murdered on farms and smallholdings in 2017/18, 52 were the owners or occupiers, 9 were farm workers and one was a farm manager.

The 2001 analysis by the Crime Information Analysis Centre found that 69.7% of the victims were farmers or their family members, 29.5% were workers or their family members and 0.9% were visitors. Of the 1,398 victims, 59.2% were male and 40.8% were female. This data is now more than 15 years old and should not be assumed to be representative of the current situation.


Two figures are needed to calculate a crime rate: the number of cases and the population affected.

According to the official definition, victims could include people “residing on, working on or visiting farms and smallholdings”. Experts say that estimating this total population is difficult, if not impossible.

“It may be problematic to use an estimate of all people living on farms depending on what data is used for murders and attacks,” Gareth Newham, head of the crime and justice programme at the Institute for Security Studies, told Africa Check.

“It is likely that many of the figures for farm attacks and murders on farms collected by organised agricultural or the SAPS for that matter, would not contain all the attacks or murders of non-farmers.”

Until an accurate estimate of the number of people “residing on, working on or visiting farms and smallholdings” is released, it will not be possible to calculate a farm murder rate.

Calculating a murder rate for commercial farmers (those registered to pay value-added tax) is also difficult. The latest estimate for this population is from 2007. New estimates are expected to be released within the next year. However, no organisation has released data on the number of commercial farmers murdered in South Africa.

(Note: Read our analysis for a detailed explanation of the problems associated with calculating the farm murder rate.)


Is there a political agenda behind the attacks?


The 2003 committee of inquiry into farm attacks investigated 3,544 cases recorded by National Operational Coordinating Committee between 1998 and 2001 to determine the motives behind the farm attacks.

The committee’s report acknowledged that “obviously, more than one factor may motivate a farm attack or cause an attacker to select a specific farm... therefore [the committee] tried to identify the cases where the apparent primary or main motive was either robbery, intimidation, political, racial or labour related”.

The committee was able to identify a clear motive in 2,644 cases. This data is, however, over 15 years old and should not be assumed to be representative of the current situation.

Research on farm attacks and murders: