FACTSHEET: What is Ebola?

In February 2014 an outbreak of the Ebola virus was identified in the south-eastern forests of Guinea, the first time the virus had been recorded in the West African state.

By March, it had spread to the capital Conakry and by April it had reached neighbouring Liberia. Since then, the disease has advanced to Sierra Leone, with outbreaks recorded but contained in Nigeria, Mali, Senegal, Spain, United States and the United Kingdom.

In August 2014 the World Health Organisation (WHO) had declared the outbreak an international health emergency and by 27 March 2016 the death toll stood at 11,232, with 28,646 Ebola cases.

However, there are suggestions that the official figures understate the number of deaths. A BBC article argued that it could be double the number and that the data "is, quite frankly, a bit of a mess".

The Ebola virus is named after the Ebola River in the Democratic Republic of Congo, where the disease claimed its first known victims in 1976.  A separate strain broke out simultaneously in Nzara, Sudan.

Unlike bacteria, which are single-celled organisms that multiply by dividing themselves, viruses require hosts to replicate: they take over living cells and then force the infected cells to reproduce the virus. While bacteria can be combated with antibiotics, the same is not true of viruses. Ebola is a ribonucleic acid (RNA) virus and multiplies particularly rapidly in its host creating a high pathogen dose.

The science writer David Quammen, who has investigated the origins and spread of the virus,  writes that RNA viruses "produce acute infections, severe for a short time and then gone. Either they soon disappear or they kill you.”

How is Ebola transmitted? 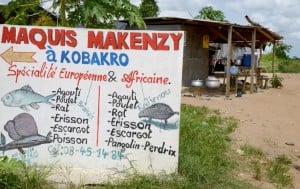 Ebola is thought to be a zoonotic or animal-borne virus. The virus survives in a “reservoir” host – an animal or insect that carries the virus at no cost to itself – and is passed on to other animals or humans through contact with the bodily fluids, secretions or organs of the host animal. Though it has not been conclusively proved, the fruit bat (Pteropodidae) is considered to be the natural host or “reservoir” of the ebola virus.

The exact manner in which Ebola enters human cells remains a mystery. Transmission to humans and primates is thought to occur through direct contact with the animal host, or through contact or consumption of the meat, bodily fluids or secretions of animals that have become infected by contact with the host. Guinea is a known wildlife trafficking hub and the country's government issued a warning to citizens to avoid eating traditional bushmeat dishes.

Once it has presented in humans, Ebola is transmitted through direct contact, where broken skin or mucous membranes come into contact with the blood or secretions of the infected person. When people fall ill, sneezing, or coughing or vomiting or bleeding or diarrhoea facilitate transmission to other victims.

It may also be transmitted indirectly “through exposure to objects (such as needles) that have been contaminated with infected secretions”, according to the US Centres for Disease Control and Prevention. This means that healthcare workers and family and friends of those infected with the virus are at a higher risk of infection.

What does the virus do? 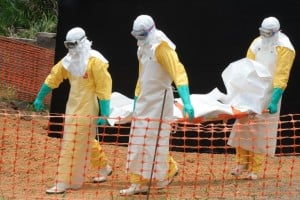 The Ebola virus causes a viral haemorrhagic fever, a set of severe illnesses that are “multisystem” in that they affect various of the body’s regulatory systems. These viral diseases damage the circulatory system and may be accompanied by bleeding or haemorrhaging.

According to the WHO, patients will begin to show symptoms anywhere from two to 21 days after exposure to the virus, mostly between days eight and 10. Patients present with fever, weakness, muscular pain, headaches and sore throat.

The generality of the symptoms at this stage makes it difficult to distinguish Ebola from various other diseases, including malaria, typhoid fever, meningitis or cholera. As the disease develops, Ebola sufferers may experience vomiting, diarrhoea, a red rash, difficulty in breathing and swallowing. The virus severely compromises the immune system, and affects liver, kidney and respiratory function, as well as the skin and blood. Blood clots may form and patients may experience haemorrhaging, bleeding internally and externally.

What is the fatality rate for Ebola?

Reports about Ebola commonly refer to a fatality rate of "up to 90%". This was the rate in one outbreak in the Congo between 2002 and 2003 but it is the highest ever recorded.

The fatality rate varies from outbreak to outbreak due to the strain of the virus involved, the level of preparedness and the availability and quality of medical care. The fatality rate of the current outbreak stands at around 52%, though this will of course change.

However, a team of experts studying the West African strain reported in the New England Journal of Medicine recently that the Guinea outbreak is a new strain of the virus: though closely related to Zaire ebolavirus. Based on further research, the WHO Ebola Response Team estimates that the fatality rate of the current outbreak is between 60% and 70%.

As yet, there is no known vaccine or cure for the Ebola virus, though several vaccinations are currently being tested. Pharmaceutical company GlaxoSmithKline hopes to start clinical trials in humans by September. And an experimental drug, Zmapp, given to two American missionary workers is also raising hopes. On 12 August 2014, the government of Liberia announced it was getting doses of the drug. But, for now, there is no known cure.

According to the US CDC, treatment for now is thus limited and merely supportive of the body’s immune function: providing fluids, electrolytes and oxygen; keeping blood pressure constant; and treating additional infections with antibiotics.

It is unclear why some people infected with the virus survive where so many do not, but it is thought to relate to the strength of the individual’s immune system, the strain of the virus and the viral dose the person has been exposed to.

In addition to supportive and symptomatic treatment, health workers can only really control the spread of the virus: isolating those infected, raising awareness of the virus and how it is spread in affected communities, ensuring appropriate protective gear is worn by all in contact with Ebola sufferers and ensuring the quick and safe burial of those who have succumbed.

Ebola in Africa: Discoveries in the Past Decade by RR Arthur

Ebola Hemorrhagic Fever: An information packet compiled by the US Centres for Disease Control and Prevention

The Hunt for Ebola by Joshua Hammer

Where will the next pandemic come from and how will we stop it? By David Quammen