Recently, bills to amend Nigeria’s constitution and improve the participation of women in society were rejected by legislators. We look at what official data says about the involvement of women in different sectors.

Women groups in Nigeria were in early May 2022 pushing to revive bills aimed at gender inclusivity, only weeks after they were rejected by federal legislators.

In March, women protested at the national assembly following the disappointing vote. Among other things, the proposed laws sought to create special seats for women at the assembly and to ring-fence a set number of political positions.

Following the public outcry, legislators said they would reconsider some of the bills.

In 2020, women made up 49.95% of the total estimated population of 206 million people, according to the Nigerian National Bureau of Statistics.

In this fact-sheet we look at some key indicators affecting women in Nigeria. We gathered the information from the statistical report on women and men.

The 2020 statistical report was the latest published by the statistics agency. It had data on seven broad areas, described as “crucial policy areas”. These were:

Dr Yemi Kale, who headed the agency from 2011 to 2021, told Africa Check that data was drawn from both primary and administrative sources.

1. Nigeria has one of the highest fertility rates in the world

This data comes from the 2018 Nigeria Demographic and Health Survey, which defined the total fertility rate as the average number of children born to a woman in her reproductive years.

To work out the rate, 41,821 women aged 15 to 45 were asked about their birth history in the three years preceding the survey.

The fertility rate is significantly higher than the global average which is estimated to be 2.4 births per woman. (Note: The latest figure is 5.2 births in 2020, using data from the United Nations Population Fund.)

Only six countries in the world have higher fertility rates: Niger, Somalia, Mali, the Democratic Republic of the Congo, Chad and Angola.

Historical data shows that the country’s highest fertility rate over the past 60 years was 6.7 births per woman, from 1977 to 1980.

Despite the observed decline, the country’s fertility rate of 5.3 births was still high, according to Nathaniel Adewole, a senior lecturer at the University of Abuja and consultant gynaecologist at the university’s teaching hospital.

The fertility rate needed to “stabilise the population in countries in the absence of mass migration is 2.1 births per woman”, Adewole said. (Note: This means a woman will give birth to 2.1 children, thereby replacing herself and her partner and keeping the population “stable”.)

A high rate places pressure on the resources available within a family and also on public infrastructure.

“Women need to adopt appropriate child spacing measures so that their body has enough time to recover from the rigours of childbearing,” Adewole said. This, he added, would also give them time to improve their life outcomes through education.

Female doctors made up less than 35% of all doctors in 2017 and 2018, the statistical report showed, using data from the Medical and Dental Council of Nigeria. In 2019 this share increased slightly to 35.04%.

Ahbor Ighoroje is a professor of physiology at the University of Benin in Edo state. She told Africa Check that male dominance was not limited to medicine.

"It is evident across the sciences and this is because from the secondary school stage, girls are encouraged to go in the direction of courses in the arts or social sciences,” she said.

“There is a misconception that women cannot excel in the sciences and thankfully, that is now being corrected by women’s great exploits in the sciences.”

Ighoroje said that there were a few instances in the sciences where women were dominant, such as nursing. But this was not enough, she said, and urged parents and caregivers to give children the space to discover their strengths.

“Ongoing campaigns to encourage girls in the direction of science, technology, engineering and mathematics (STEM) should also be taken to the grassroots to enlighten more people.”

3. Women as teachers – a stacked deck

The data showed the number of female teachers was at its highest in primary education. This fell as the education level advanced.

In 2019, 56.2% of primary school teachers across Nigeria were female. This dropped to 50.4% in secondary schools and 23.6% among the academic staff in universities. Women accounted for just 15% of professors.

There were obstacles that made it difficult for Nigerian women to advance in academia, Maryam Quadri, an associate professor of political science at the University of Lagos, told Africa Check.

“Some peculiarities affect women in academia. As the educational level rises, the requirements for practitioners also increase. For instance, an individual must have completed a master’s degree and be registered for a PhD to be a lecturer in Nigeria,” Quadri said.

“There is the social obstacle where a woman gets married after her first degree and does not have a husband who is supportive of her furthering her education. Her husband might also be supportive but the demands of catering for the home and her children could hinder a woman from having enough time for her programme.”

“There is also the economic obstacle where resources are limited. For example, a doctorate programme can be capital intensive given the research and the length of time required to complete the programme and she has to keep paying fees to the university. And all this is in addition to catering for the home,” Quadri said.

She added that some disciplines were so rigourous that it took determination to get results, given the obstacles women have to overcome. “In my discipline, only three women have gotten a PhD and mine took 10 years.”

Experts say this outcome is reflective of the disparity between the educational attainment of women and men in the country.

Literacy data from the United Nations Children’s Fund (Unicef) showed that 59.3% of young women aged 15 to 24 in Nigeria were literate, compared to 70.9% for men. This data was from the 2016/17 multi-indicator cluster survey.

A person was considered literate if they were able to read a short, simple sentence about everyday life or if they attended secondary or higher education.

4. Females in business – an uphill climb

In Nigeria, the official statistics agency regards small and medium enterprises as businesses that employ 10 to 199 people. A national survey in 2017 found that Nigeria had 73,081 such businesses.

The statistical report showed 43.43% of people employed by these businesses were women. More were also owned by men, at 57.98%.

Oyinlola Sale is an entrepreneur and the convener of Women Connect, a non-governmental organisation and online community for women. She told Africa Check that access to finance was a major problem for entrepreneurs, especially women. The dollar scarcity in Nigeria and the Covid pandemic had worsened this, she added.

“The government has made some effort but more can be done to channel financial resources in loans and grants to entrepreneurs because they contribute to the economy,” Sale said.

On how the business environment treated women, she said: “Entrepreneurship makes it a bit easier for women as they can dictate their working hours. This is unlike the corporate world where maternity leave and opportunistic bosses make it difficult for women to climb the corporate ladder.”

5. Women in security – up against a wall

The law governing the police has also been criticised as discriminatory. For example, women who wish to marry after becoming police officers must get permission from their state supervisor. This is only granted if their intended spouse is of “good character” and the woman has served for at least three years.

The police act also says an unmarried female officer faces dismissal if she becomes pregnant. A bid by the Nigerian Bar Association to repeal this section of the law was knocked back by a judge in February 2022.

The situation is somewhat different in the paramilitary Nigeria Security and Civil Defence Corps. Women made up 26.73% of the total 56,441 civil defence workforce. This held constant in 2018 before rising slightly to 26.96% of the total 55,919 officers in 2019.

6. Women in politics and governance – the short end of the stick

Nigeria is a signatory to the 1995 United Nations’ Beijing declaration which requires that 35% of political posts be reserved for and occupied by women.

The country has however never met this provision.

Women hold only 3.6% of the seats in Nigeria’s lower house of representatives, compared to the average of 25% in sub-Saharan Africa. This is according to 2021 data from the Inter-Parliamentary Union of the United Nations (UN).

Globally, Nigeria was ranked 184th of 188 countries for this indicator as of January 2021.

Data from the country’s Independent National Electoral Commission shows 14 of Nigeria’s 36 state houses of assembly do not have any female members.

Before his re-election in 2019, president Muhammadu Buhari pledged that 40% of appointments to federal boards and parastatals would be women. That promise is yet to be met.

Four of the five rejected bills sought to improve female representation in politics. Since Nigeria returned to democratic rule in 1999, it has not had a female president or vice president.

The World Bank says that without positions in parliament, it is difficult for women to influence policy. The UN’s sustainable development goals include increasing the proportion of seats held by women in national parliaments.

The report used the Nigeria demographic and health survey to provide data on this indicator for 2013 and 2018. This showed 60.6% of physical violence was committed by current husbands or partners in 2013, dropping slightly to 58% in 2018. Mothers and stepmothers perpetrated the second highest rate of violence against women at 25.7% in 2013. This dropped to 19.4% in 2018. 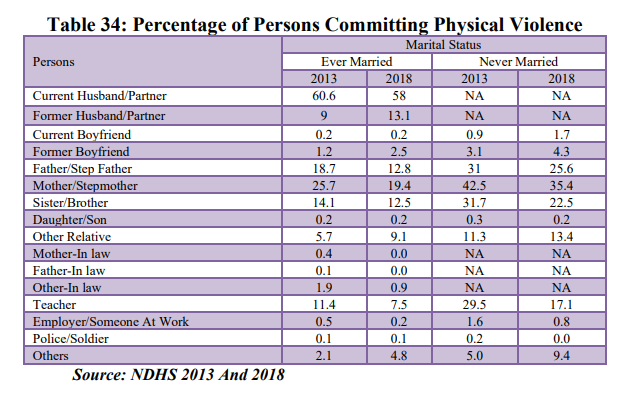 The 2018 demographic survey reported that 28% of Nigerian women believed that a husband was justified in hitting his wife if she went out without telling him, burnt the food, refused to have sex, neglected the children, or argued with him.

The data also showed that women formed a majority of the victims of trafficking.

Ikape James Ikape is the programme officer at the Nigeria-based Media Coalition and Awareness to Halt Human Trafficking. He told Africa Check that human trafficking was a cross-border business “that involves millions of dollars”.

Traffickers, he said, preferred women for many reasons, including harvesting their organs, prostitution, and providing cheap labour.

This was further driven by the perception that women were vulnerable and by the low rates of girl-child education in the rural areas, Ikape said.

Ikape recommended a three-pronged approach to solving the problem of human trafficking in Nigeria.

“There needs to be proper education, especially for women, so that they can make informed decisions and be empowered to live the life they desire. So if a trafficker walks up to a woman and starts making lofty promises, she can ask questions and get suspicious,” he said.

“The capacity of local organisations should also be strengthened and built where it does not exist. This way, they can go into communities and enlighten them on how to avoid traffickers and how to report cases of trafficking.”

He also recommended the use of special courts to expedite trials to ensure justice for victims and discourage other traffickers.