Skip to main content
Back to Africa Check
AFP

Marburg disease, caused by a virus related to Ebola, is rare but severe, and often fatal. It is therefore a serious public health threat. But what is Marburg and how does it spread?

Nigeria’s disease control centre, the NCDC, is on high alert after Ghana declared its first-ever outbreak of Marburg virus disease.

The NCDC is a state agency that manages Nigeria’s response to infectious disease outbreaks and public health emergencies.

In July 2022 Ghana confirmed its first two Marburg cases. Both patients died in a hospital in the heavily populated Ashanti region.

The NCDC says its concern was raised by Nigeria’s proximity to Ghana and a World Health Organization (WHO) alert on Marburg. It has assessed Nigeria’s overall risk as “moderate”.

The WHO says “an outbreak of Marburg virus disease may represent a serious public health threat as it is severe and often fatal”.

This is only the second time Marburg has been reported in West Africa. Guinea had a single case in 2021.

Elsewhere in Africa, previous outbreaks and sporadic cases of Marburg have been reported in Angola, the Democratic Republic of the Congo, Kenya, South Africa and Uganda.

What is Marburg virus disease?

Marburg is a rare but severe illness, often fatal in humans, with a case fatality rate of up to 88%. It was formerly known as Marburg haemorrhagic fever.

It is transmitted to people from fruit bats and, like Lassa fever, is an example of a zoonosis – an infectious disease that has jumped from a non-human animal to people.

The Marburg virus was first recognised in 1967, with simultaneous outbreaks in laboratories in the German cities of Marburg and Frankfurt, and in Belgrade, Serbia. Thirty-one people became ill, seven of whom died.

Marburg can be difficult to distinguish from other viral haemorrhagic fevers. In its early stages its symptoms are often like those of Ebola. The two diseases are caused by different viruses, but are the only members of the Filoviridae, or filovirus, family.

The signs and symptoms of Marburg and Ebola are also similar, Prof Tanimola Akande, a public health physician and consultant at the University of Ilorin in Nigeria’s Kwara state, told Africa Check.

“They both cause viral haemorrhagic diseases. The fatality of both diseases is very high,” he said.

Only a specialised laboratory blood test can confirm the presence of the Marburg virus. Nigeria has two facilities that can detect it – the National Reference Laboratory in Abuja and the University of Lagos Teaching Hospital laboratory Centre for Human and Zoonotic Virology.

How is the disease transmitted?

Marburg is transmitted to people from fruit bats, which are considered its natural host. It spreads among humans by direct contact – via broken skin or mucous membranes, for example – in the body fluids of infected people, or on surfaces and materials, the WHO says.

The US Centers for Disease Control (CDC) notes that the virus “can remain in certain body fluids (including semen) of a patient who has recovered from Marburg virus disease, even if they no longer have symptoms of severe illness”.

But it adds that there is no evidence that Marburg can spread through sex or other contact with the vaginal fluids of a woman who has had Marburg.

The virus can also linger in the placenta, amniotic fluid and foetus of infected pregnant women, and the breast milk of women infected while breastfeeding.

People remain infectious as long as their body fluids contain the virus.

The WHO classifies the Marburg virus as a risk group 4 pathogen, due to its severity and its threat to global public health.

What are the symptoms?

After an incubation of two to 21 days, symptoms begin with a high fever, and severe headache and malaise – a feeling of discomfort, weakness and general ill-health. Marburg is not contagious during the incubation period.

Fatality rates have ranged from 24% to 88% in past outbreaks, depending on the virus strain and how the case was treated. On average, half of infected people die. 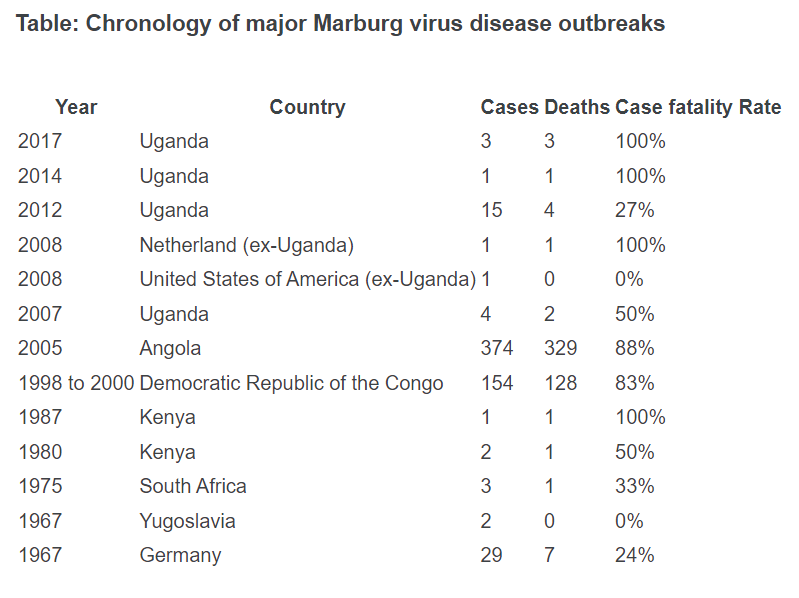 Who is at risk?

People may be at risk if they have close contact with African fruit bats, people sick with the disease or non-human primates infected with Marburg virus.

The WHO says the source of infection in the two Ghanaian cases is unclear, but both patients were from communities living in a forest environment.

“Family members and hospital staff who care for patients infected with Marburg virus face a higher risk of getting infected,” the CDC says.

Are there treatments and vaccines?

There are currently no vaccines or antiviral treatments approved for Marburg, according to the WHO.

Supportive care, which includes rehydration with oral or intravenous fluids, and treatment of specific symptoms improves survival. According to the  WHO, this care can be effective if it is given as soon as the first symptoms appear.

What are health agencies doing?

The WHO is supporting both a major investigative team in the Ashanti region and Ghana’s health authorities by deploying experts and providing personal protective equipment.

The global agency is also strengthening disease surveillance, testing and contact tracing. It is working with communities to alert and educate them about the dangers of the disease.

“We must intensify screening of inbound passengers,” he said.

The NCDC says it is increasing surveillance at borders and other entry points.

It adds that it has set up a team to “coordinate preparedness efforts for the Marburg virus disease, and other emerging viral haemorrhagic diseases”.

Despite the country being a key focus of the global campaign to eradicate the mosquito-borne disease, authorities are struggling to land the...

Each rainy season Nigerians face a higher risk of cholera. Our factsheet looks at what causes these yearly outbreaks, what makes them worse,...

What are the symptoms of Lassa fever, how does it spread and when is a vaccine expected?