Despite the country being a key focus of the global campaign to eradicate the mosquito-borne disease, authorities are struggling to land the telling blow.

The unexplained deaths of six college students in Nigeria’s Borno state early in September 2019 sparked media reports of a “strange illness” circulating in the country.

The students had all recently visited the popular Yankari National Park in the northeastern state of Bauchi.

The deaths saw messages circulate on social media urging people to avoid the park so as not to contract the mystery illness. These warning messages were also flagged in Africa Check’s health misinformation group on Whatsapp.

On 6 September 2019 the Nigeria Centre for Disease Control confirmed that a Bauchi state health team had three days earlier reported the deaths of six students from the College of Education Waka Biu. They were part of a group of 95 students who had visited the park. Two others had developed symptoms of yellow fever and were being tested, the agency said in its press release.

The NCDC said it had confirmed four cases of yellow fever. All four patients had lived in or been to Bauchi in the previous four weeks, including a tourist who had visited the Yankari park. The NCDC, which is mandated to counter public health epidemics in Nigeria, said it “activated” its emergency operations centre in response to the outbreak.

In recent months, the health agency has confirmed other cases of yellow fever, including 20 deaths in Ebonyi state between May and August 2019, which it said had been missed.

Nigeria’s earliest outbreak of yellow fever was reported in Lagos in 1864, with subsequent regular outbreaks reported until 1996.

No confirmed cases were then reported for 21 years, until September 2017.

In a statement on 7 September 2019, the World Health Organization said that between September 2017 and December 2018 there were nearly 4,000 suspected cases of yellow fever in Nigeria. Of these, 78 cases from 14 states were confirmed.

Between January and July 2019 some 24 deaths from 1,905 suspected cases of yellow fever were recorded, according to data from the Nigerian health authorities.

What is behind these recurring outbreaks? And what are health officials doing to tackle them?

What is yellow fever?

Yellow fever is an acute viral haemorrhagic disease that can kill within 10 days if symptoms become severe.

But only a small proportion of patients who contract the virus will develop severe symptoms, according to a May 2019 factsheet by the WHO. Most people do not experience symptoms, and if they do, these disappear in three to four days.

Yellow fever is difficult to diagnose, especially in the early stages. Its symptoms include jaundice or yellowing of the eyes or skin, fever, muscle pain, headache, and nausea or vomiting. Prof Bayo Onajole, a community medicine specialist and public health physician at the Lagos University Teaching Hospital, told Africa Check this.

The yellowing gives the disease its name. A more serious case can be confused with severe malaria or even poisoning.

Where is it found?

How is it spread?

The virus is spread through bites of an infected mosquito. The species of interest are Aedes, which is usually black with characteristic white or silver markings on its body, and Haemogogus. These species live in different habitats and breed either around houses or in the jungle, or in both habitats.

Increased contact between people and infected mosquitoes strengthens the transmission cycle, as this diagram from the WHO shows: 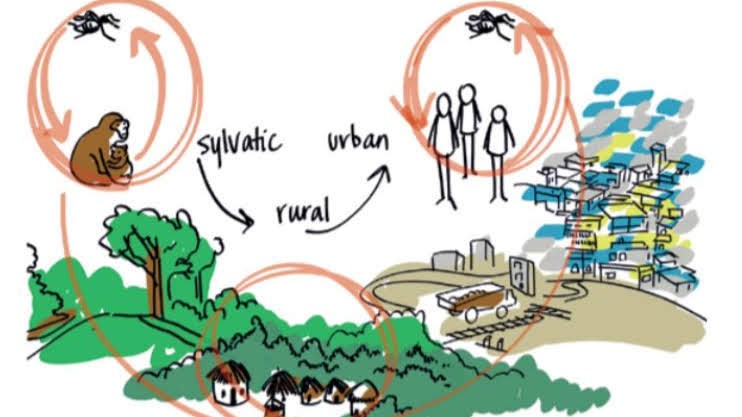 The US Centers for Disease Control and Prevention notes that “there is no medicine to cure infection from yellow fever”. The disease, however, cannot be spread from human to human.

What can be done?

Experts say vaccination is the most effective way of preventing yellow fever.

“Yellow fever is a completely vaccine-preventable disease and a single shot of the yellow fever vaccine protects for a lifetime,” says the Nigeria Centre for Disease Control.

Vaccination could be done routinely for infants, in mass campaigns, or be required of those travelling to endemic areas.

The vaccine is provided free in all primary healthcare centres in Nigeria as part of the routine childhood immunisation schedule, the NCDC adds.

Make the environment unfriendly for mosquitoes

Experts highlighted other ways of controlling the fever, including making the environment unfriendly for mosquitoes.

“Reducing exposure to mosquitoes, including the use of insect repellent to avoid bites both during the day and at night and removing potential breeding sites, such as standing water containers, are also effective,” said Dr Joseph Oteri, according to the WHO.

Countries should also be better prepared for epidemics, including through strong surveillance and quick diagnosis, the WHO says in its 2017/2026 strategy paper on eliminating yellow fever epidemics.

Under-reporting is a major concern

The WHO says “a confirmed case of yellow fever in an unvaccinated population is considered an outbreak”.

The Nigeria Centre for Disease Control says the increasingly regular occurrence of yellow fever outbreaks is largely because many people are unvaccinated.

“The proportion of Nigerians protected with the life-saving vaccine is very low,” Prof Tanimola Akande, a public health physician and consultant at the University of Ilorin, told Africa Check.

“Availability of the vaccine for mass immunisation to cover all Nigerians is also a challenge. Until Nigerians are protected the epidemics of yellow fever will persist.”

The country’s 2016/17 Multiple Indicator Cluster Survey by the National Bureau of Statistics interviewed some 28,085 mothers and caretakers across Nigeria’s six geopolitical zones.

It found that only 41.7 % of children aged 12 to 23 months had been vaccinated against yellow fever.

Vaccination rates were significantly lower in the north, and in rural areas.

What is the potential for spreading?

The NCDC says there is a “moderate risk” at the regional level due to the movement of individuals from affected states to adjacent areas and neighbouring countries. It however warns that it “has the potential to spread rapidly and cause serious public health impact”.


What is Nigeria doing to counter the disease?

To fight the yellow fever mosquito, the Bauchi State Primary Healthcare Development Agency announced that it would use an aircraft to spray the Yankari Game Reserve.

Preventive vaccination campaigns are a key containment strategy for the NCDC.

“We encourage every family to ensure that children receive all their childhood vaccines,” it said in September 2019.

In September, the Nigerian federal government, together with partners such as the WHO and Gavi, the Vaccine Alliance, carried out a vaccination campaign in three states (Ebonyi, Benue and Cross River) to counter outbreaks. This targeted 1.6 million people.

Health workers and communities are also being informed on how to protect themselves. In a media briefing following the deadly outbreak in Ebonyi state, top health official Chris Achi reportedly said that quack cures had contributed to the death toll.

Nigeria is also part of the global campaign to eliminate yellow fever epidemics by 2026. In a national 10-year plan, some 75 million people in the country would be protected by 2021. The WHO says 35 million people have been vaccinated in Nigeria.

Do 80% of Nigerians lack safe drinking water? It’s worse than that