“Some folks pointing out that the storming of the #Capitol may have largely been orchestrated by #ANTIFA types, and they’re sharing evidence to back their claims,” reads a message posted on Facebook in South Africa.

It appeared on 6 January 2021, the day thousands of people violently stormed the Capitol building in Washington, the US capital. Lawmakers were gathered there to certify the electoral college votes for president-elect Joe Biden. Five people died in the riot.

The crowd had marched from a rally near the White House at which current president Donald Trump repeated his claim that the US presidential election he lost in November had been rigged. There is no evidence for the claim. 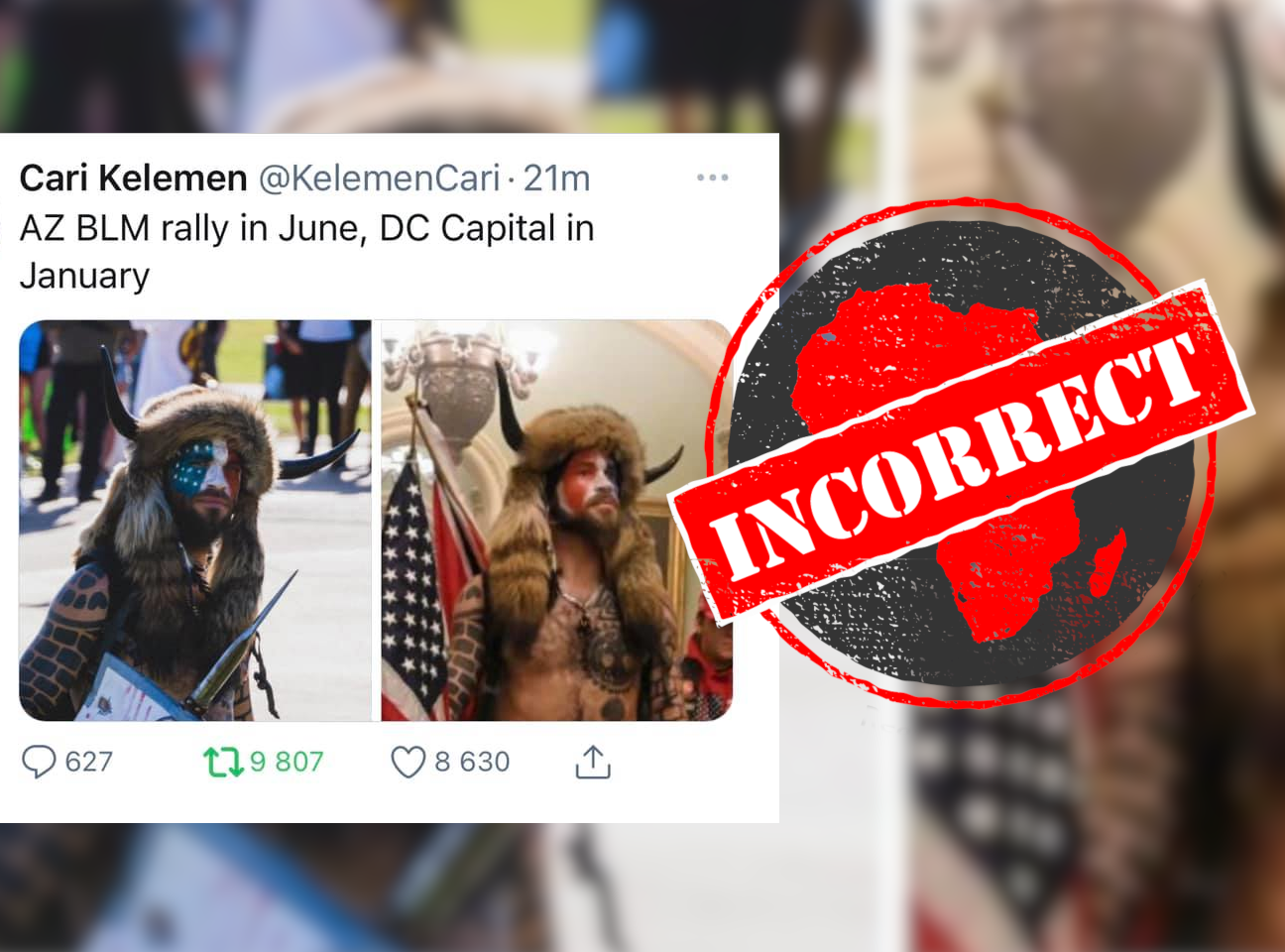 The Facebook message continues: “Kahle-kahle, what’s going here? Are we being dribbled? Here’s one such piece of evidence...”

The “evidence” is a screenshot of a tweet from one Cari Kelemen, who describes herself as a Trump supporter. It shows two photos of the same bare-chested and tattooed man wearing a fur hat with horns, the US flag painted on his face.

“AZ BLM rally in June, DC capital in January,” the tweet reads. The claim is that the man was at both a Black Lives Matter rally in the US state of Arizona in June 2020, and at the storming of the US Capitol in Washington in January.

Antifa is short for anti-fascist, an unofficial movement of left-leaning activists with no unified leadership.

Kelemen’s tweet has since been deleted, although screenshots appear on several websites and the claim remains live on Twitter.

Is the tweet evidence that the storming of the Capitol was not the work of Trump supporters but instead “may have largely been orchestrated” by “Antifa types”?

Protesting – not participating in – antiracism rally

On 8 January Steven D’Antuono, assistant director of the US Federal Bureau of Investigation, said there was no evidence that Antifa was involved in the invasion of the Capitol.

And the man in the photos has since been identified as Trump supporter Jacob Chansley, who prefers the name “Jake Angeli”.

The Arizona Republic reports that Angeli has repeatedly appeared at demonstrations outside the Arizona Capitol since 2019. He follows the baseless far-right Qanon conspiracy theory, and is known as the QAnon Shaman.

QAnon adherents believe Trump is a saviour crusading against a “deep state” conspiracy of elite paedophiles that include politicians and celebrities.

Angeli did attend an antiracism protest at Tempe Beach Park in Arizona in June 2020, but was actually there to disrupt the protest and advance QAnon theories.

There is plenty of evidence that Angeli is a QAnon and Trump supporter, not a member of Antifa. In a video from May 2020 he is seen at a protest, yelling: “Thank you president Trump! Thank you Q!”

Jake Angeli, 32, sporting horns and body paint, yells his thanks to President @realDonaldTrump and Q.

The latter is presumably a reference to QAnon, a controversial far-right group. @azcentral pic.twitter.com/RJ990L0xA2

And the photo of Angeli at the protest, used in Kelemen’s tweet, has been cropped. In the uncropped version he is seen carrying a sign that reads “Q sent me.”

The photo was taken by Brett Lewis, who posted it on Twitter on 6 January with the comment: “This is the original photo I took in June. The right wing hysteria machine decided to crop it and distribute it to try to blame BLM and Anti Fascists for today’s events.”

Angeli was arrested on 9 January and charged with “knowingly entering or remaining in any restricted building or grounds without lawful authority” and “violent entry and disorderly conduct on Capitol grounds”.

The US attorney’s office for the District of Columbia said in a statement: “It is alleged that Chansley was identified as the man seen in media coverage who entered the Capitol building dressed in horns, a bearskin headdress, red, white and blue face paint, shirtless, and tan pants. This individual carried a spear, approximately 6 feet in length, with an American flag tied just below the blade.”

Angeli will be kept in jail until his trial.