Antiviral medicine remdesivir not a Covid-19 vaccine, and distributed worldwide – not just in Africa

“Could the Corona experts explain why this vaccine is restricted to African countries only?” asks a message posted on Facebook in Kenya in January 2020. “As far as I know, we have only one Covid-19 affecting both Africa, EU, Canada and the US.”

The post includes two photos of a box of medicine. The first photo shows the front of the box, labelled: “Remdesivir for Injection 100 mg/vial”. Below is a notice: “Not for distribution in US, Canada, or EU.”

On the back of the box, in the second photo, is a notice: “For use in the below countries only.” It lists 47 countries, all in Africa.

Is remdesivir a Covid-19 vaccine? And is it only being distributed in African countries? We checked. 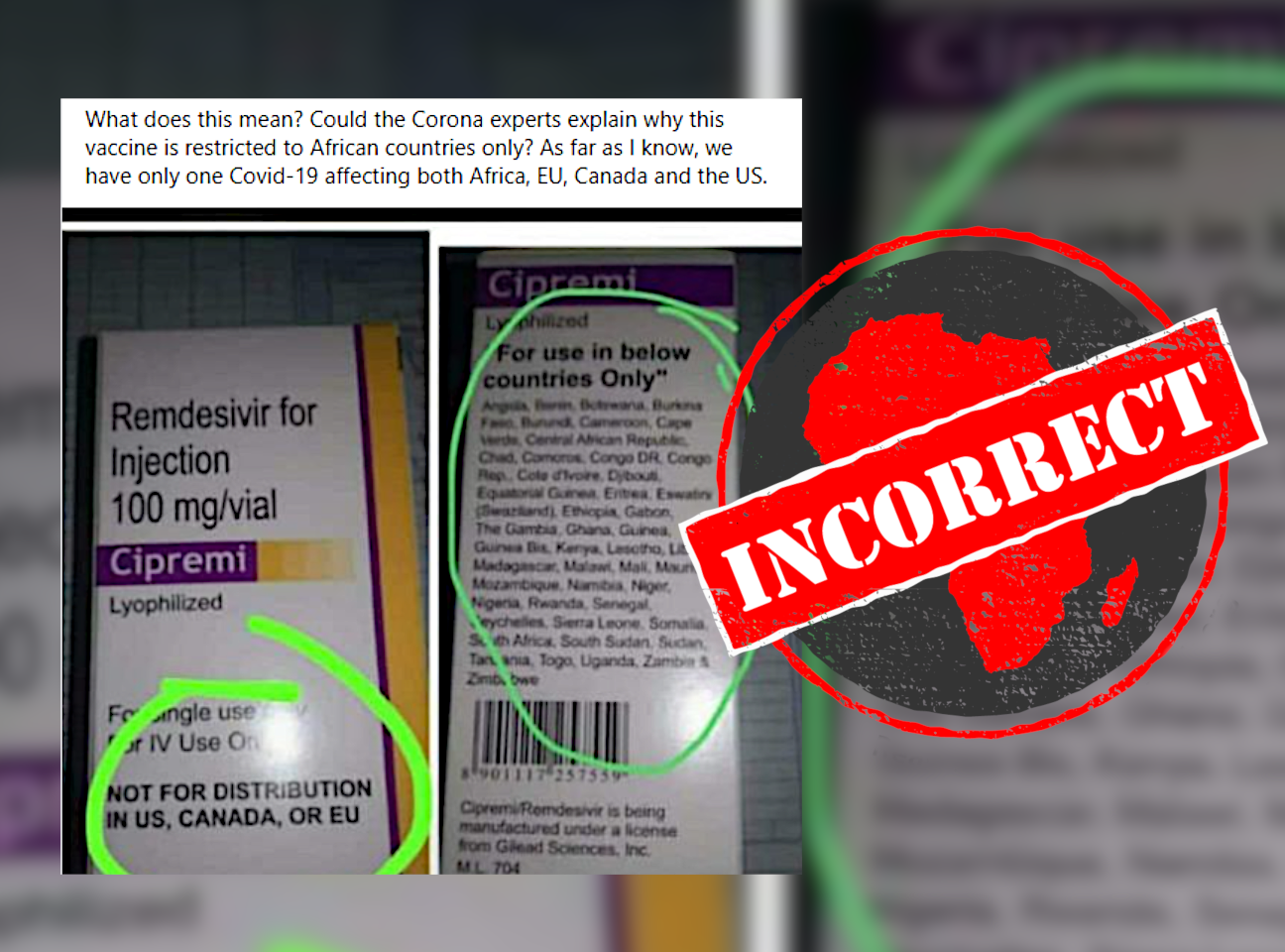 A vaccine stimulates the body’s immune system to produce antibodies against disease-causing germs such as viruses and bacteria. And remdesivir is not a Covid-19 vaccine.

It is instead an antiviral medication first developed to treat infection by a range of viruses, including the virus that causes hepatitis. Researchers found that the drug showed some efficacy against coronaviruses such as Middle East respiratory syndrome and severe acute respiratory syndrome.

The drug was also administered to a small number of patients as a treatment for Ebola but failed its first randomized clinical trial.

In October 2020 the US Food and Drug Administration approved remdesivir, under the brand name Veklury, for use in patients aged 12 and older for the treatment of Covid-19 serious enough to require hospitalisation.

“The approval of Veklury was supported by the agency’s analysis of data from three randomised, controlled clinical trials that included patients hospitalised with mild-to-severe Covid-19,” the FDA said.

But the World Health Organization has since issued a conditional recommendation that remdesivir should not be used on hospitalised Covid-19 patients. “There is currently no evidence that remdesivir improves survival and other outcomes in these patients,” the WHO said.

Drug licensed for distribution worldwide – not just in Africa

The Gilead website explains that the licensing agreements permit the manufacturers to produce the drug for distribution in 127 mostly lower and middle income countries.

A full list of the countries is shown on their website. It includes the 47 African countries listed on the box in the Facebook post, as well as countries in Europe, Asia, and South America. The list excludes Canada, the US and the EU.

But this doesn’t mean Gilead isn’t distributing Veklury in those countries. On 8 October 2020, the drug company signed a joint procurement agreement with the European Commission to distribute Veklury to EU member states.

The US began stockpiling remdesivir in June 2020, reportedly buying up virtually all available stocks of the drug for the following three months. And Canada approved the drug for use in Covid-19 patients in August 2020, making the drug available through its public health system.

Remdesivir is not a Covid-19 vaccine and its distribution is not restricted to African countries. Drug company Cipla was granted licensing rights to distribute the drug in African countries but it is also available in the US, Canada and EU member states