“A tree with darker leaves than the surrounding trees can indicate that a dead body is buried beneath it,” reads a message posted on Shower Thoughts, a public Facebook group, in April 2022.

Detecting buried bodies by the colour of tree leaves could help solve the considerable problem of locating corpses, especially in areas with many trees.

But is there any scientific merit to the claim? We looked into it. 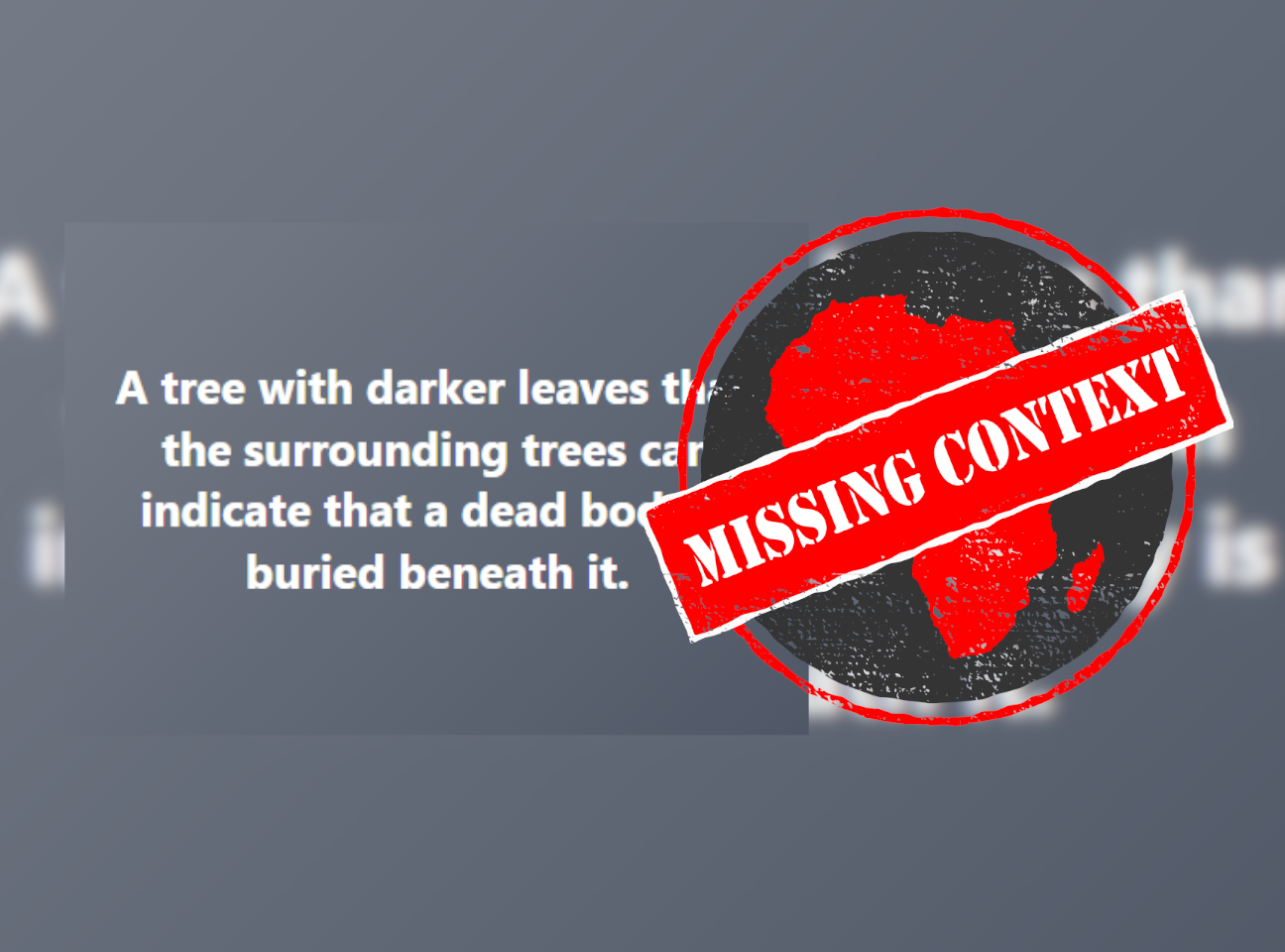 The idea seems to come from a 2020 article in the journal Trends in Plant Science. The article, widely reported in the media, is titled “Plants to Remotely Detect Human Decomposition?”

But to examine the claim, we need to understand what the article was – and wasn’t – saying.

Its aim was to start the long process of determining whether something like this could be possible. It proposed to the scientific community, in theory, the idea that plants could help identify corpses.

But it wasn’t a scientific study that actually tested the idea. It was just an initial theoretical exploration of it.

How could leaves help identify bodies?

A buried and decomposing human body changes the soil close to it as chemicals and microbes (what scientists call the “necrobiome”) enter into the soil.

The main idea is that this could cause certain changes in the plants near the body, and that these changes could be seen and identified.

Here’s an example set out in the article. A human body contains a fair amount of the element nitrogen. A decomposing body could over time leach this into the soil. The amount of nitrogen (converted to ammonium) in the soil around the body would likely be far greater than in the surrounding soil.

Nitrogen is linked to the production of chlorophyll in leaves, which gives them their green colour. The more nitrogen, the greener the leaves. So the article proposes that there could be a “greening effect” in plants surrounding a decomposing body.

A problem with this idea is that since nitrogen is present in large amounts not only in people but in many other animals, any “greening effect” could just be a sign of an animal having died in the area. But the article proposes that decomposing human bodies could lead to specific changes that are different to decomposing animal bodies.

Another idea set out in the article is that some amino acids in human bodies (for instance, phenylalanine) could eventually change the plant cell walls that cause the colour of leaves to change.

Not enough research yet

But research into how any of this might work is still in its infancy. Some research has looked at using drones to find decomposing animal bodies by looking for changes in plant colour, biochemistry and other anomalies.

Scientists still have a long way to go before they know whether it is possible to detect human bodies like this. Neal Stewart, an author of the article, told Africa Check that one controlled study had now been done, but the results had not yet been published.

In theory, it is possible that leaf colour could one day help us locate dead bodies. But for now, we simply don’t know for sure whether this is possible. And even if it were, the claim that the leaves of a plant near a body would be darker is not supported by current evidence.