“THIS IS A TREE!” reads text on a graphic above a picture of a tall and unusual columnar structure that looks nothing like a tree, towering over cactus plants in a desert.

“Technically, it’s called a mechanical tree,” the graphic says, claiming that the object “sucks CO2 out of the atmosphere 1000x faster” than real trees.

The graphic then explains some of the benefits of capturing carbon dioxide (CO2), one of the greenhouse gases responsible for global warming. It claims that carbon captured by the mechanical tree “can be turned into minerals and stored in the concrete we build with, cutting up to 700 MEGATONS of CO2 annually – equal to 150 MILLION cars off the road every year”.

Facebook’s fact-checking system has flagged the graphic for investigation. Does this “mechanical tree” really exist? If it does, how much CO2 does it capture? 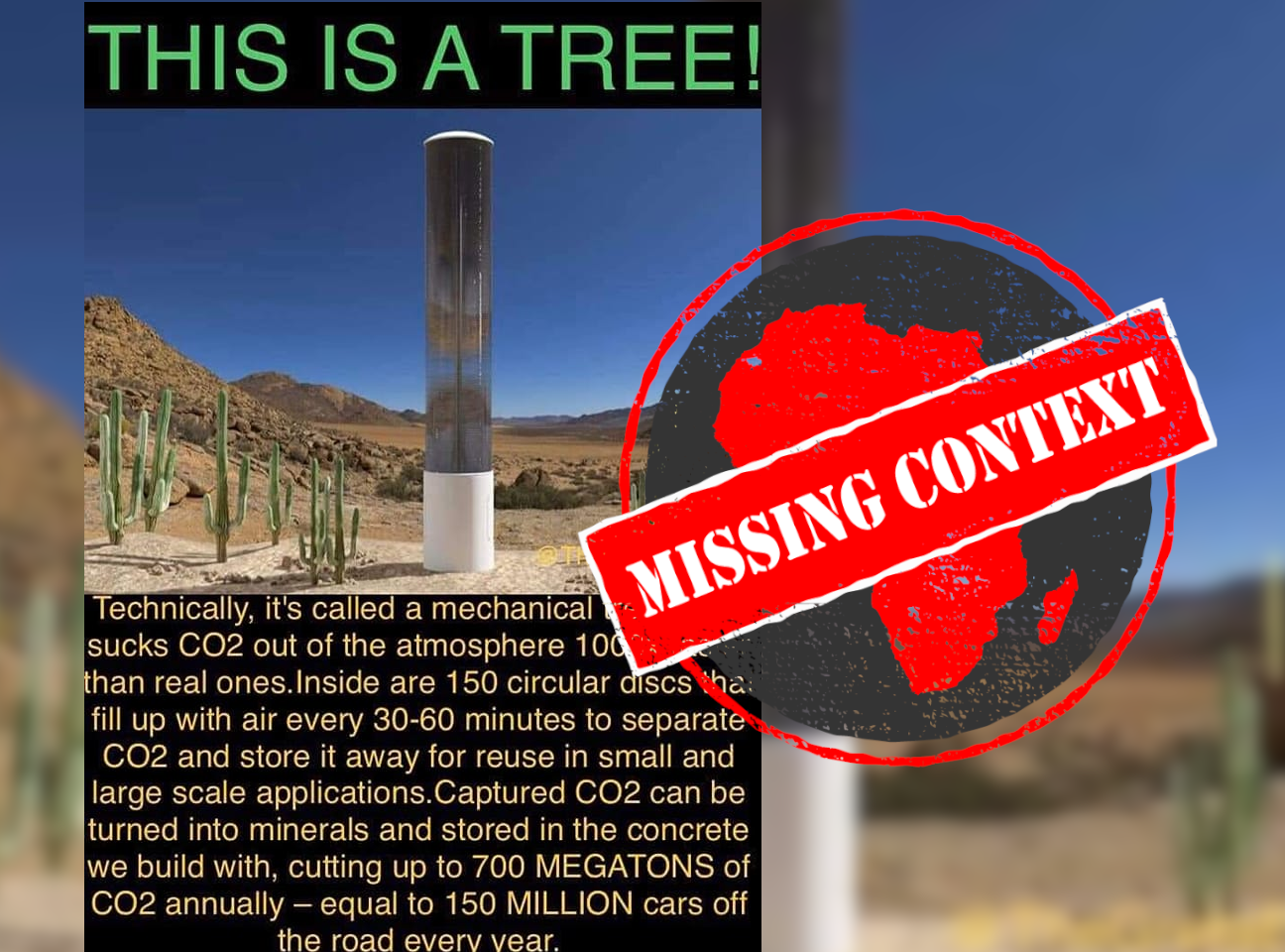 The graphic seems to have been originally posted on the Facebook page “The Greta Effect”. Some of its details are correct, but it gets others wrong.

The first mistake is simply a case of branding. The device has been prototyped (more on this later), but it isn’t “technically” known as “a mechanical tree”. Its trademarked name is MechanicalTree. The product was designed by Carbon Collect Limited, an Irish company previously known as Silicon Kingdom Holdings.

The MechanicalTree is a proprietary form of carbon capture technology. This broad range of technologies absorbs carbon dioxide from the atmosphere, theoretically counteracting the effects of burning fossil fuels like oil and coal, and slowing the pace of climate change.

Several carbon capture projects have been constructed around the world, but these tend to be energy-intensive and expensive. MechanicalTrees require far less energy to capture and process carbon dioxide and, as of 2019, were considered the cheapest technology in the carbon capture industry.

Carbon Collect’s MechanicalTree is based on the research of Dr Klaus Lackner, the director of Arizona State University’s (ASU) Center for Negative Carbon Emissions and professor at the School of Sustainable Engineering and the Built Environment of the Ira A Fulton Schools of Engineering.

An ASU video uploaded on YouTube in May 2019 demonstrates a prototype of the technology. The prototype is far bulkier than the sleek column in the graphic on Facebook.

A prototype is likely to look less finished than a final product, but the picture in the graphic is actually concept artwork, not a photo of a completed MechanicalTree. It can be seen in an ASU press release on Lackner’s research.

In fact, no MechanicalTrees have been built – yet. Carbon Collect CEO Pól Ó Móráin told Forbes in February 2022 that “the first commercial-scale MechanicalTree™ [...] will be installed, commissioned, and operational in the coming few months”.

On its website, Carbon Collect estimates that if it is eventually able to construct over 250 “farms”, each 2 to 3 square kilometres in size with 120,000 “trees”, then it will be able to reach its long-term goal of capturing a gigaton of CO2 annually. It claims that this is roughly 3% of global emissions.

For now, though, these numbers are theoretical. And the “tree” in the Facebook graphic is only concept art.