A lengthy message by the Facebook page “Arimamide Health Tips” makes several claims about the power of coconut oil.

“Coconut oil is really effective when it comes to kidney and urinary tract infections,” it reads. “The fatty acids it contains eliminate the lipid coating on bacteria, which then soothes the areas which are inflamed.”

It also says coconut oil can “flush out kidney stones” and “destroys” hepatitis and measles.

Coconut oil comes from the coconut fruit of palm trees. The oil is made by shaving or grating the white meat found inside the coconut. It is used for cooking and in beauty products.

We checked the message’s startling claims. 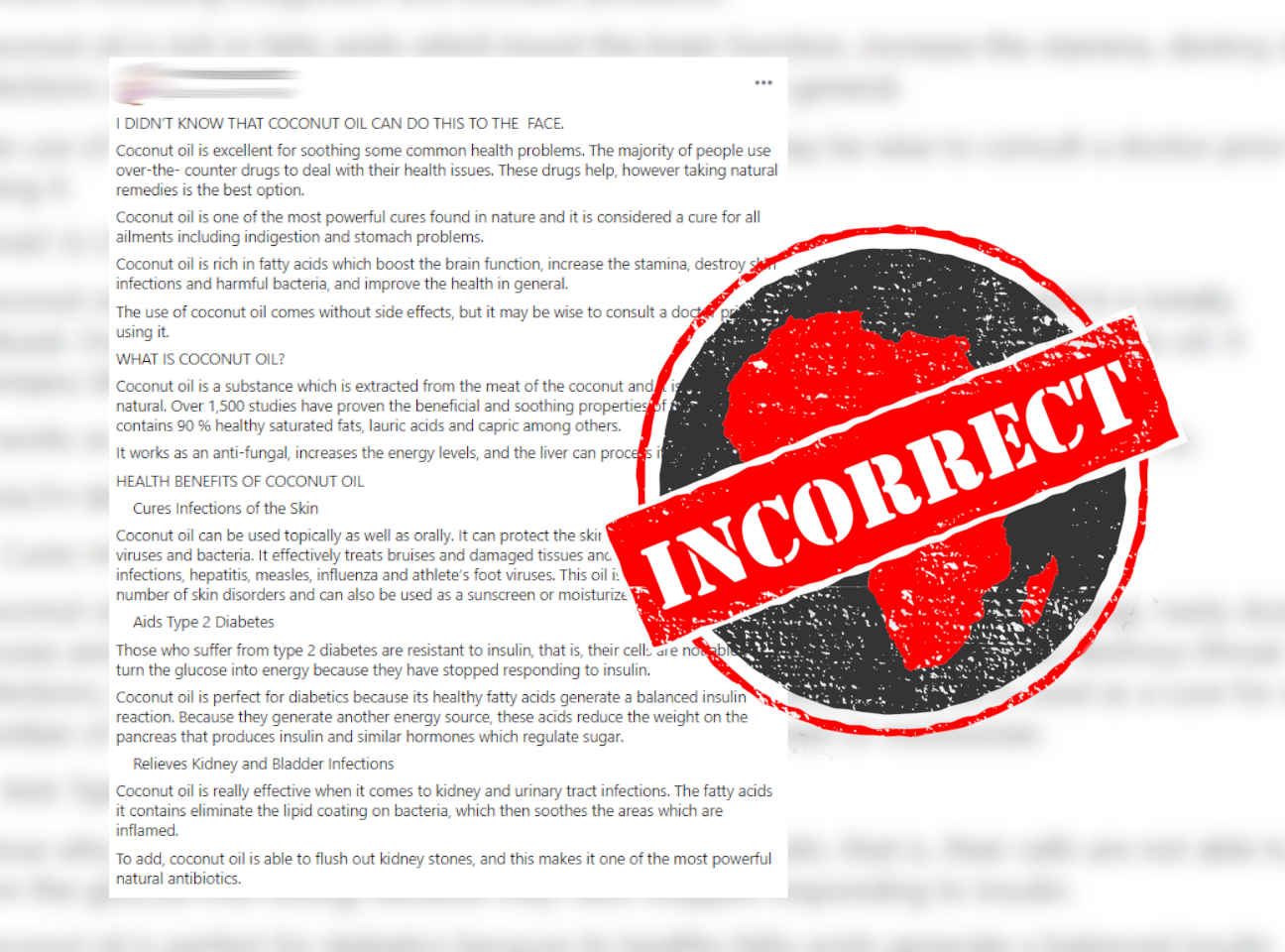 Kidney stones are mineral deposits that form when the urine crystallises inside the kidneys. They can be caused by a variety of things, including a poor diet, weight gain and certain medical conditions. Kidney stones can become a health risk if they block the urinary tract.

Prof Antony Meyers, nephrologist and chairperson of the National Kidney Foundation of South Africa, told Africa Check this was “the first time we heard about the possibility of coconut oil being suggested to flush out kidney stones”.

“Water and not any other fluid is the suggested drink to help with flushing out kidney stones.” Importantly, a person with kidney stones should see a doctor.

“Part of the treatment for kidney stones is to positively identify the type of kidney stone in order to avoid fluids and foods that might worsen the condition.”

Hepatitis is an inflammation in the liver. Symptoms of hepatitis include dark urine, joint pain, fever, vomiting and abdominal pain. It is caused by hepatitis viruses, of which there are several types: A, B, C, D and E.

Dr Stephen Korsman, a medical virologist at South Africa’s University of Cape Town and National Health Laboratory Service, told Africa Check that “coconut oil can definitely not treat hepatitis, whether viral or other. It has not been tested in proper clinical trials as there is no reason to do so.” He said this was because there was “no preliminary evidence of its usefulness for hepatitis, so nobody is taking research further”.

Dr Andrew Scheibe, a medical doctor and board member of the International Network on Health and Hepatitis in Substance Users, agreed: “Coconut oil cannot be used to destroy or control viral hepatitis.”

Hepatitis is a manageable disease. Korsman said that “most viral hepatitis just need supportive therapy, but hepatitis B and C are treatable with medication. Coconut oil won't do any harm, but thinking that it's going to treat hepatitis can do harm if proper treatment is avoided.”

Measles a viral infection with no specific treatment

Measles is a highly infectious virus. Symptoms of infection include a fever, runny nose, cough and a skin rash. These symptoms appear 10 to 14 days after infection.

Dr Melinda Suchard, head of the Centre for Vaccines and Immunology at the National Institute of Communicable Disease and lecturer in chemical pathology at the University of Witwatersrand, told Africa Check there was no specific treatment for measles because it is a viral infection.

“Supportive therapy such as fluid replacement and treatment of secondary infections may be required in hospitals for severe cases.”

Whether you are suffering from kidney stones, hepatitis or measles, it’s best to consult your doctor before taking any home remedy.