A graphic shared on Facebook in South Africa shows a leopard on the branch of a tree.

“With no sightings of the Formosan clouded leopard since 1983, it was declared extinct in 2013,” the text reads. “Until February of 2019, when it was spotted for the first time in almost 40 years.”

The clouded leopard, scientific name Neofelis nebulosa, is a wild cat found in the foothills of the Himalayan mountains through Southeast Asia into southern China.

The Formosan clouded leopard, or Neofelis nebulosa brachyura, was thought to be a subspecies found on the island of Taiwan. Formosa was a colonial name for Taiwan.

But was the animal declared extinct until being spotted again in 2019, as claimed on the graphic shared on Facebook? 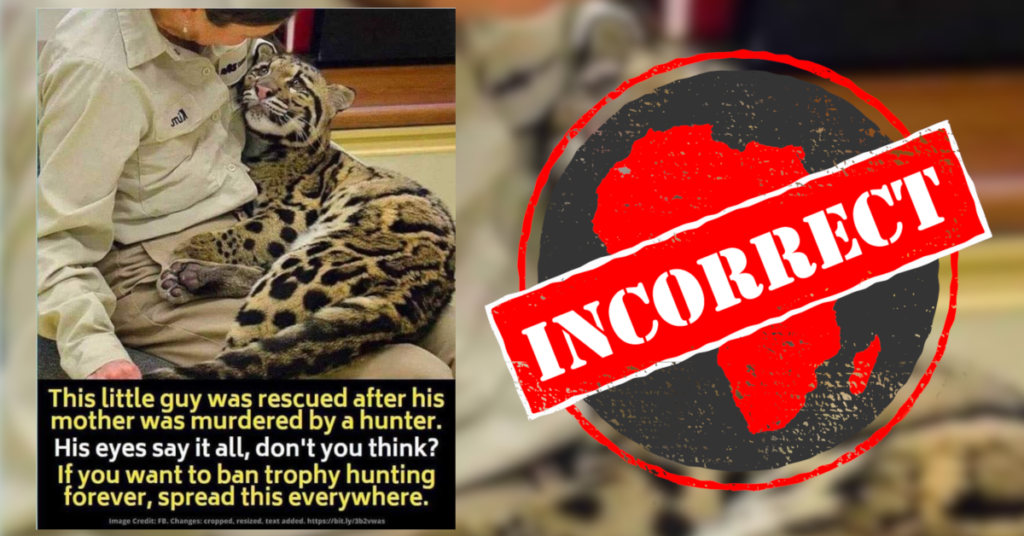 The Formosan clouded leopard was declared extinct in 2013, after it had not been sighted since 1983 and a 13-year-long study by zoologists failed to find even one leopard. Their habitat was largely destroyed by the logging industry and the wild cats had been hunted for their pelts.

But the Formosan clouded leopard’s numbers could have dwindled long before that. Dr Kurtis Jai-Chyi Pei, a professor at National Pingtung University of Science and Technology in Taiwan, was part of the 13-year search for the Formosan leopard. He has reportedly questioned the “last sighting”. This was actually a photo of a dead clouded leopard at the bottom of a pit trap, said to be set by indigenous Taiwanese people, in 1983.

Indigenous Taiwanese did not use pits for hunting, preferring snares, Pei said. And it is suspected that the photo was actually taken in Borneo, showing a similar-looking species, but not the clouded leopard endemic to Taiwan.

What makes an animal ‘extinct’?

It may be thought that an animal is considered extinct when it hasn’t been sighted for 50 years or more. But this is a myth.

It often takes an extensive network of researchers, professionals and even amateurs to work out the conservation status of an animal. More recently, researchers have started using data analysis to help estimate how rare species are faring in the wild.

Even then, there are so-called “Lazarus” cases, where species previously thought extinct are sighted in the wild.

Africa Check spoke to the Red List unit, who confirmed that they had only assessed the clouded leopard at the species level (Neofelis nebulosa) in 2016, where the animal is listed as vulnerable.

On 23 February 2019, a Taiwan News report said that a Formosan clouded leopard has been spotted in the wilderness of southeast Taiwan.

According to the article, rangers had seen the wild cat hunting goats on a cliff in Taitung County’s Daren Township.

Although the sightings still require further investigation, the village’s leaders asked the Forestry Bureau to halt logging and prohibit hunters from entering the area.

And DNA taken from a Formosan clouded leopard pelt at the National Taiwan Museum showed it belonged to Neofelis nebulosa, the same species found in mainland Asia.

This means the clouded leopard found in Taiwan isn’t a distinct subspecies. It belongs to the same species found on the Southeast Asian mainland, which is not extinct.

The new findings lend support to the possibility of reintroducing Neofelis nebulosa to Taiwan. This could be important for the species because, worldwide, the outlook for clouded leopards is bleak.