“Captured,” begins a message posted on Facebook in Nigeria on 11 May 2021.

“He is FRENCH, he is a journalist and a humanitarian services provider. Under cover, he is an Arms Dealer, setting this Country called Nigeria and other region on fire while we are blaming IPOB and President Buhari.”

The first shows a white man standing with his arms behind his back, possibly handcuffed, with an officer in uniform looking on.

The second and fourth is of the same white man seated on the steps to a house, an array of arms, ammunition and camouflage gear on the ground in front of him. Five men, three in uniform and two holding rifles, are standing near him.

The third shows the pages of a passport. Its photo is of the same white man.

Ipob is the Indigenous People of Biafra, an organisation banned in Nigeria. Muhammadu Buhari is the country’s president.

Was a French arms dealer captured for causing conflict in Nigeria? 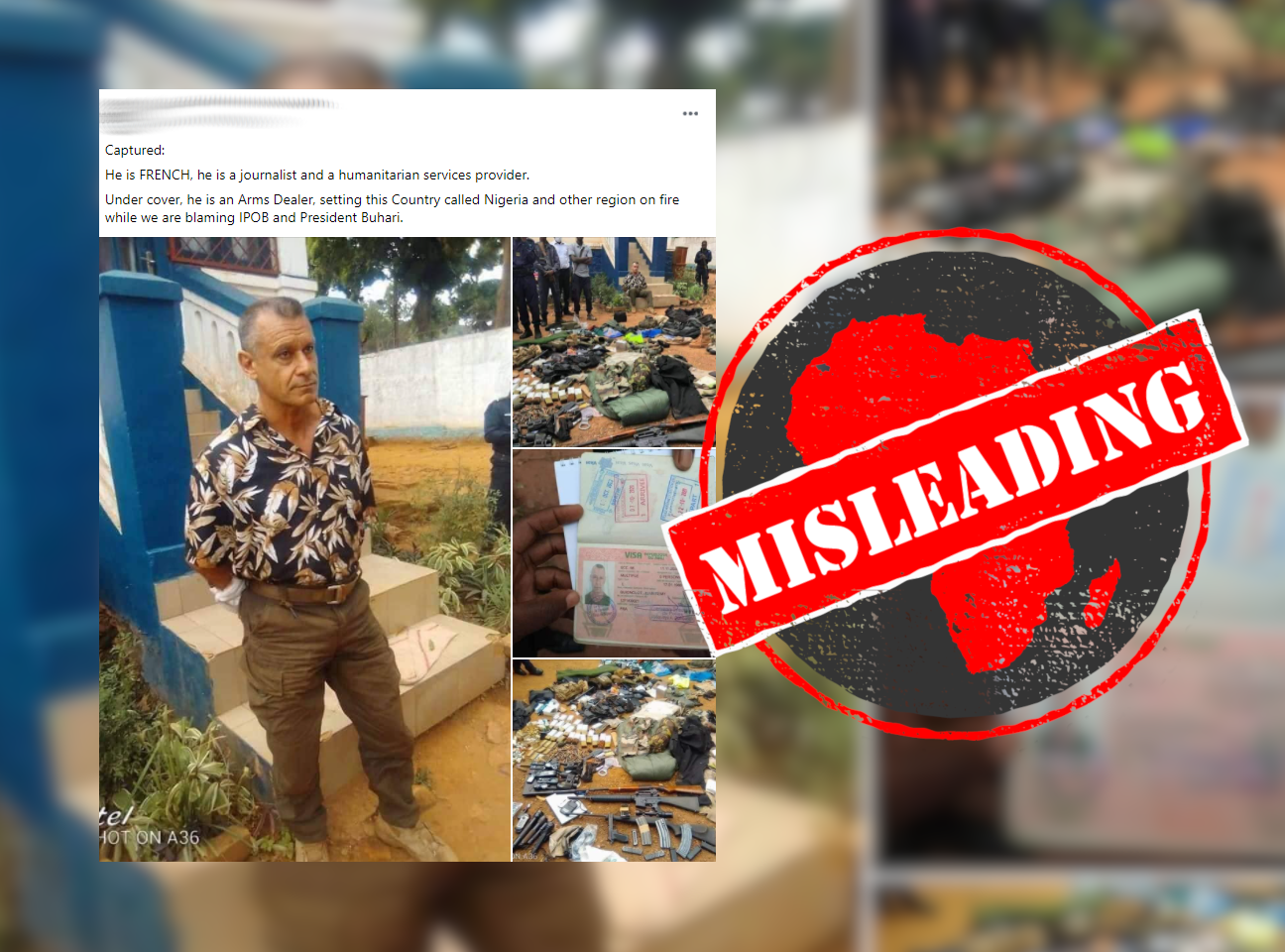 The photo of the passport shows that the man’s name is Juan Remy Quignolot. A Google search for the name brings up an Associated Press (AP) article, dated 11 May and headlined: “French man arrested in Central African Republic”.

According to the article, Quignolot was arrested in Bangui, the capital of the Central African Republic.

“Police have arrested a French national accused of supporting rebels in volatile Central African Republic after discovering a cache of weapons and ammunition at his residence, authorities said,” the article begins.

It says “Juan Remy Quignolot, 55, was detained on Monday after the search that also uncovered military fatigues and bank notes in multiple currencies”. The information is attributed to Eric Didier Tambo, the attorney general of the Bangui court of appeal.

“Quignolot, a former soldier and paratrooper in the French army, has denied the accusations and said he was a trainer for a private security company in Bangui,” the AP’s article continues. “The company, though, has denied any affiliation with him.”

The Associated Press is an independent news service, founded in 1846 and widely regarded as trustworthy. Its report on Quignolot’s arrest has been republished by dozens of media outlets.

The Central African Republic is, as its name suggests, in central Africa. Nigeria is to the west of the country, with Cameroon and Chad between.

A French national was arrested in the Central African Republic in May 2021. But there is no evidence that he was working to create conflict in Nigeria.