Man impregnates sheep in Kenya – or Nigeria? No, people and sheep can’t reproduce

Published on 01 October 2019
A photo of a creature that looks a little like a human baby, lying next to a sheep, is circulating on Facebook in Nigeria and Kenya.

One Kenyan post claims a sheep gave birth to a “childlike creature” in Kiambu county. “The residents of this area believe that someone was sexually involved with the sheep.”

Another post, also from Kenya, says the “incident” took place in “Kano” and has “triggered suspicions that some individuals must have been sleeping with the sheep”.

The photo has also been published on Nigerian blogs and online forums with the claim that it’s the result of a man having sex with a sheep.

One Nigerian Facebook post says: “There is palpable tension in Kano after an ewe gave birth to an animal that could best be described as a human being early Thursday morning. The little newborn bore all the nomenclatures of a human being including head, hands and legs akin to that of an infant.”

In Kenya there is a place called the Kano Plain near the town of Ahero in Kisumu county. In Nigeria there’s the city of Kano, the capital of Kano state.

But could this story be true, whether it happened in Kenya or Nigeria? We checked. 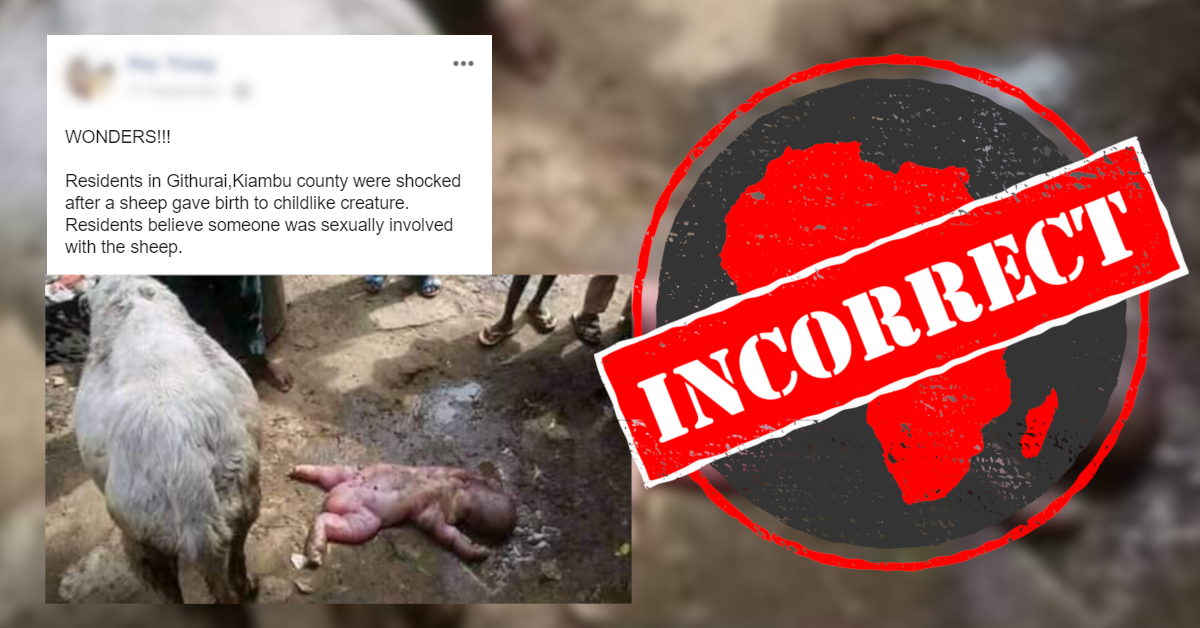 On 16 November 2017, Africa Check debunked a claim that two “human” kids were delivered by a goat in Nigeria’s Yobe state.

At the time, Africa Check spoke to Dr Carina Visser, senior lecturer in the department of animal and wildlife sciences at the University of Pretoria in South Africa.

“In genetic terms, each species has a unique number of chromosomes,” she told us. “Some species, such as horses and donkeys, are related and have very similar chromosome numbers (62 versus 64), and thus can breed and produce live offspring. However, humans have 46 chromosomes, while goats have a total of 60.”

“Given this, it is impossible for these species to even produce a viable embryo or foetus, let alone offspring,” Visser said.

It is impossible for people to breed with sheep. The “human-like” creature in the photo may be a still-born lamb. – Grace Gichuhi