“Al-Kuhl is the Arabic word from which alcohol is derived,” claims a graphic posted on Facebook. It adds that in Arabic, “al-kuhl” means “body-eating spirit”.

The claim also appears in a Facebook status update and other graphics which add that alcohol is a literal spirit or devil that can cause a person’s “true spirit” to leave their body, or “lower your vibration”.

Yet another graphic even claims that “they” are “pushing” hand sanitisers because these contain “alcohol (Al-Kuhl) which is a body eating spirit that lowers your vibration”.

Alcohol abuse can seriously harm your health, but these claims are wrong about the origins of the word. And some use pseudoscience to misrepresent the dangers of alcohol.

What are the roots of the word “alcohol”, and do its origins have anything to do with a “body-eating spirit”? 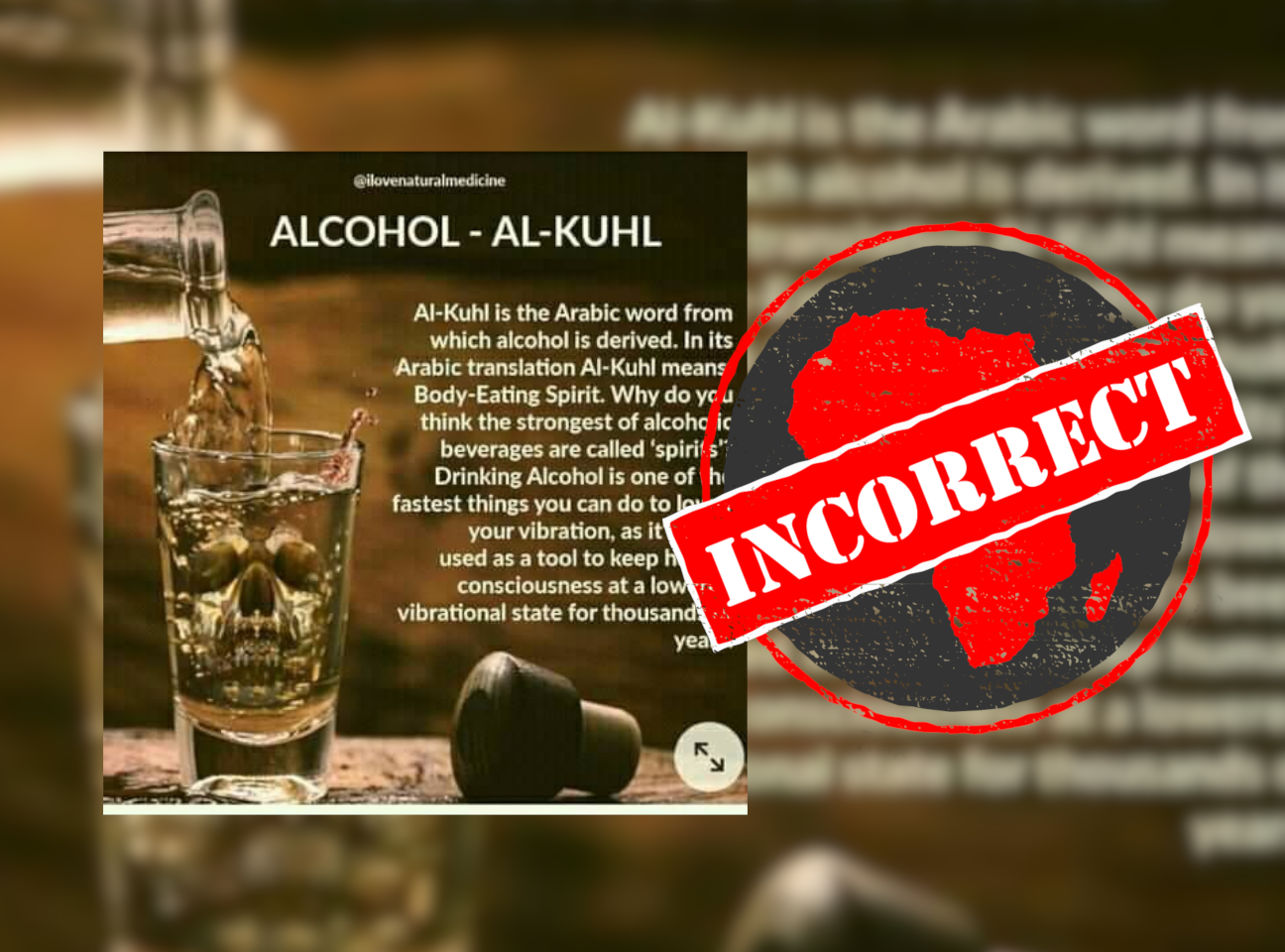 Andreas Unger, a German philologist (someone who studies words and their development) explained to German media outlet Deutsche Welle (DW) that the English and German words for alcohol do come from the Arabic term “al-kuhl”.

But this is not a reference to a “spirit”. Instead, it refers to an early cosmetic called “kohl” that was used to darken the area around the eyes, much like eye shadow.

Kohl is not common today as it is often made using lead and so could cause lead poisoning.

As Etymology Online explains, the term “alcohol” was first adopted by Latin speakers to refer to the fine powder from which kohl was made. When it was adopted into English it originally referred to any fine powder produced by a similar process. Over time, the term evolved to refer to anything produced as the result of a purification process.

Unger told DW that many English words of Arabic origin were first adopted when the scientific and technical developments of Arabic scholars were translated into European languages such as Latin.

Etymology Online says the earliest written record of “alcohol” used to refer to “intoxicating ingredient in strong liquor” dates to 1753. Before this, alcohol was referred to as “rectified spirits” or simply “brandy”.

So the term has never been connected with a “body-eating spirit”. The use of the term “spirits” in reference to alcohol has different origins, and was used much earlier than “alcohol”.

The claim that alcohol can “lower your vibration” is consistent with the pseudoscience of “energy medicine”.

This proposes that the body regulates health, memory and emotions through vaguely described “energy waves”. But there is no evidence for it, and experts have repeatedly referred to it as a pseudoscience.

Drinking alcohol – especially drinking it excessively – has been shown to increase people’s risk of liver disease, high blood pressure, heart failure, several cancers, and other health issues. This has nothing to do with a person’s “energy”, but rather the chemical effects of alcohol on the body.

These effects are not associated with external use of alcohol as a sanitiser, though some alcohols may have consequences like skin irritation when applied.