No, baking soda is not a miracle cure that treats cancer and kills viruses

A viral Facebook message claims, in Afrikaans, that simply by taking baking soda every day, “kan jy jou eie liggaam beskerm en selfs jou eie lewe red teen dodelike viruse” – “you can protect your own body and even save your own life from deadly viruses”.

Baking soda (also called bicarbonate of soda or sodium bicarbonate) is an alkaline product used as a raising agent in baking.

The message, which has been viewed almost 200,000 times in the past few months, claims that sodium bicarbonate is not just a common household baking aid – it is also a powerful medicine. It says adding a little baking soda to your drinking water can kill any virus in the human body, destroy cancer cells, increase oxygen levels and balance the body’s pH.

It goes on to assure readers that baking soda is not harmful in any way, and encourages them to add some (two teaspoons per litre, or more “to taste”) to their drinking water every day.

So is baking soda really a miracle cure in disguise? We checked. 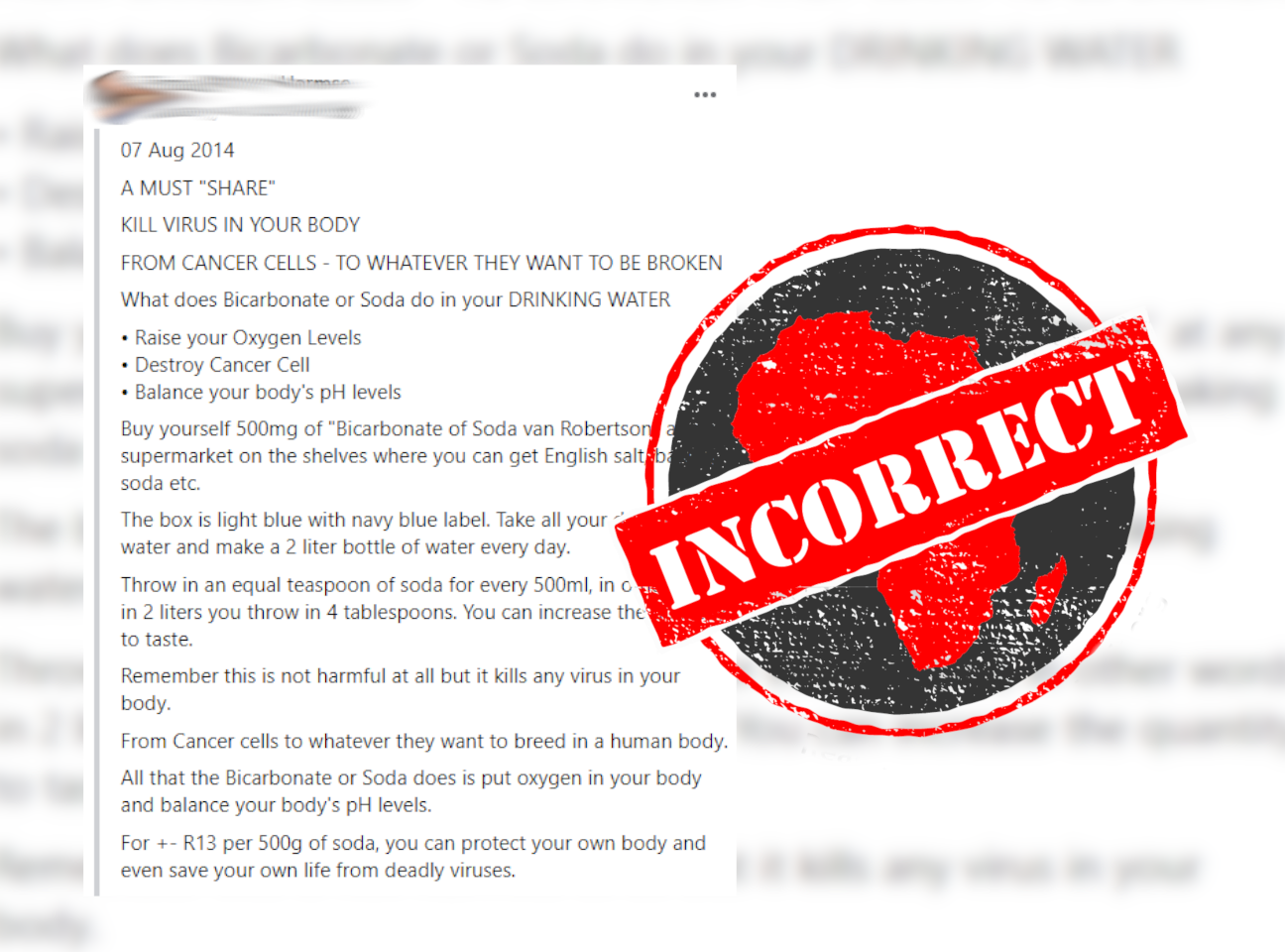 Your pH levels not affected by what you eat

The post claims that bicarb can “balance your body’s pH levels”. This claim falls under an umbrella of misguided theories about the body’s pH that have been widely debunked – including several times by Africa Check.

The fact is, your pH levels remain stable and balanced without needing to eat certain foods (although all parts of your body do not have the same pH as each other).

Eating high-pH or alkaline foods will not result in big changes in your body’s pH. And that’s a good thing! For your cells to work properly they require a constant pH in the blood and, regardless of what you eat, your body will do everything it can to keep that balance. Find out more about the body’s pH here.

Alkaline foods will not cure cancer

This claim has also been widely debunked. The idea is that cancer thrives in acidic environments, so making those places less acidic by, for example, taking an alkaline substance will mean it is harder for tumours to develop.

But as Africa Check and others have pointed out before, this idea reverses cause and effect. Scientists have known for a long time that cancer growth itself causes more acidic environments around tumours, not the other way around – so making the environment more alkaline will not necessarily help treat cancer or slow down tumour growth.

Researchers have been looking into whether directly targeting tumour “microenvironments” with alkaline substances has any benefit, but this research has not been done in humans and has nothing to do with swallowing bicarb. You can read more about alkaline diets and cancer here.

Baking soda does not oxygenate the body

Lastly, the message claims that bicarb can also “put oxygen in your body”, and “raise your oxygen levels”. From the post it is not clear how this claim relates to health or viruses.

But as South African virologist Diana Hardie previously told Africa Check, the only thing that “puts oxygen in your body is the lungs”, and oxygen “does not specifically kill viruses”.

Bicarb does have a few health benefits. A review of scientific studies found that when used to brush your teeth it can reduce plaque and gingivitis, a condition involving gum inflammation.

It is also known to ease the symptoms of occasional acid reflux and is a common ingredient in many over-the-counter heartburn medications. Baking soda can also soothe some kinds of skin irritation, and may even play a role in enhancing muscle endurance among athletes.

Despite these potential benefits, taking baking soda – especially in high doses or over long periods of time – has been linked with severe and occasionally even lethal side effects. These include kidney disease, muscle weakness, mineral deficiencies, hypertension, heart failure and various intestinal problems.