“Bill Gates Regrets Promoting Covid-19 Vaccine, Calls For Its Withdrawal As President Biden Keeps Mute,” reads the headline on a screenshot of what seems to be a news article circulating on Facebook. It’s been going viral in Nigeria and South Africa since January 2022.

The screenshot doesn’t show any other information, such as where the article was published, its author, or even the article itself.

Most versions include a photo of Gates, a co-founder of both software company Microsoft, with Paul Allen, and the Bill & Melinda Gates Foundation, with former wife Melinda French Gates.

(Disclaimer: Funding from the Bill & Melinda Gates Foundation made up 11% of Africa Check’s income in 2020.)

The Gates Foundation has supported vaccination for decades – long before the Covid pandemic. It continues to promote vaccines against Covid.

But has Bill Gates recently said he now regrets promoting Covid vaccines, and has called for them to be withdrawn? And has US president Joe Biden been silent on the matter? 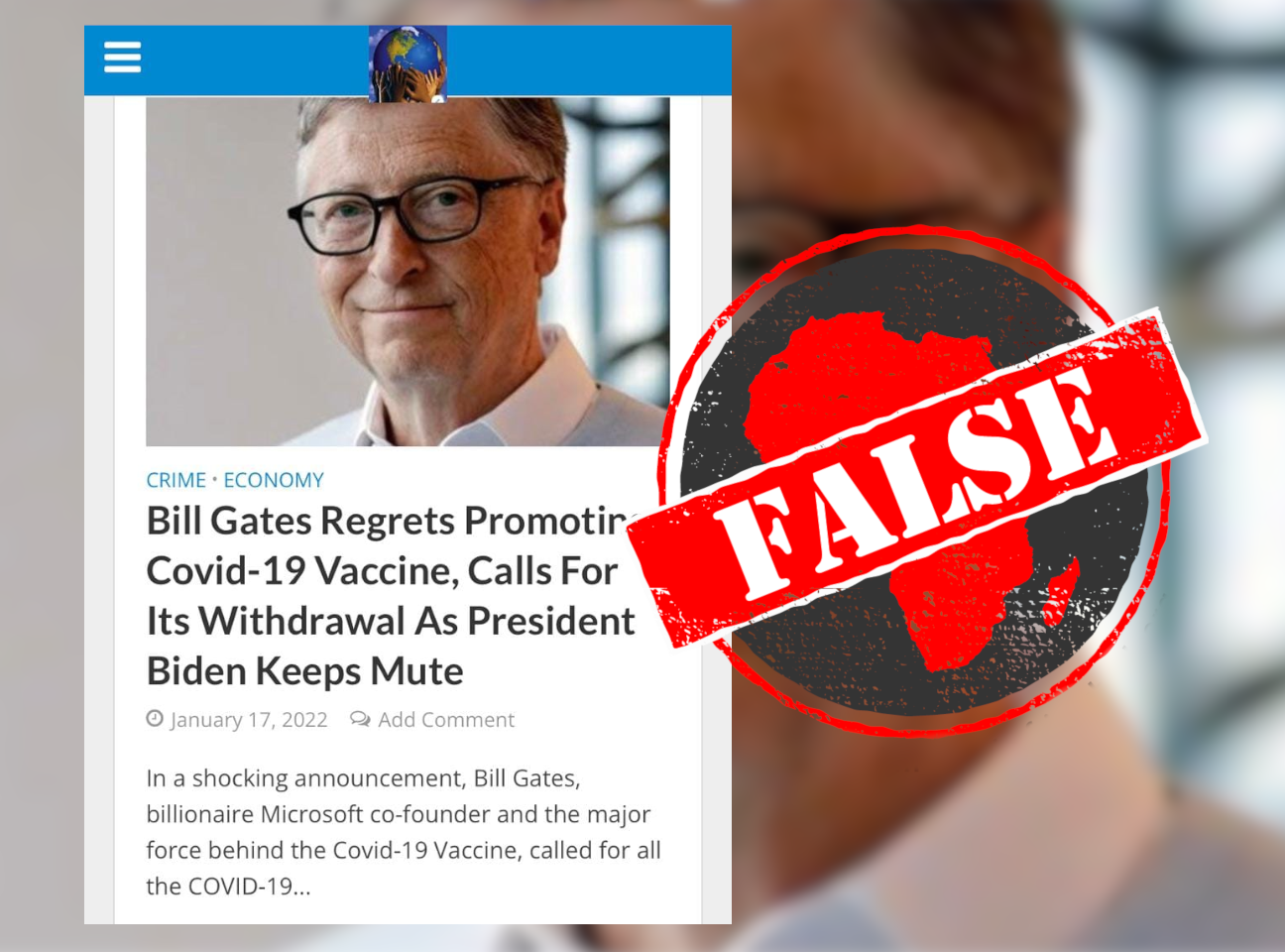 Gossip blog based in Nigeria

Some of the screenshots include a date – 17 January 2022 – and a link to an article on the Nigeria-based blog Our World Gist. “Gist” is a Nigerian colloquialism for “gossip”, or “what’s going on”.

But the article has been deleted from the blog. So Africa Check plugged the link into the search field on the Internet Archive’s WayBack Machine.

The article was published on Our World Gist on 17 January, according to five WayBack Machine captures from 19 to 21 January.

It begins with: “In a shocking announcement, Bill Gates, billionaire Microsoft co-founder and the major force behind the Covid-19 Vaccine, called for all the COVID-19 genetic-based vaccines to be taken off the market immediately.”

It then quotes Gates as saying, in “an often anguished 19-minute televised speech”, that “we made a terrible mistake”.

If Gates had made an “anguished” 19-minute TV speech denouncing Covid vaccines, it would have been in the headlines of major news outlets across the world. But there is no news of the speech.

And Our World Gist has deleted the story. So where did it come from?

Africa Check ran a Google search with the first sentence of the story, and found what seems to be the original on a website called The Exposé. The site’s URL indicates it’s from the United Kingdom.

Here the article’s headline is: “SATIRE – In an alternative universe Bill Gates has called for the withdrawal of all Covid-19 Vaccines.”

It begins with what appears to be a disclaimer.

“A note from The Editor – when we first published this article we should have made it clear at the beginning that it was satire rather than at the end. We did not do this and we apologise…”

But the editor’s note then makes further false claims about Gates and Covid vaccines.

Satire is defined as “the use of humour or exaggeration in order to show how foolish or wicked some people's behaviour or ideas are”.

But some sources of false information abuse the idea of satire. “I was joking” is no excuse. And there’s no humour or exaggeration in The Exposé’s story. It is simply false.