Published on 04 December 2019
“The bitter almond tree, the highest source of vitamin B17, known to prevent and treat cancer, was banned from the USA in 1995,” says a meme shared on Facebook in South Africa in August 2019.

It was flagged as possibly false by Facebook’s fact-checking system. We investigated. 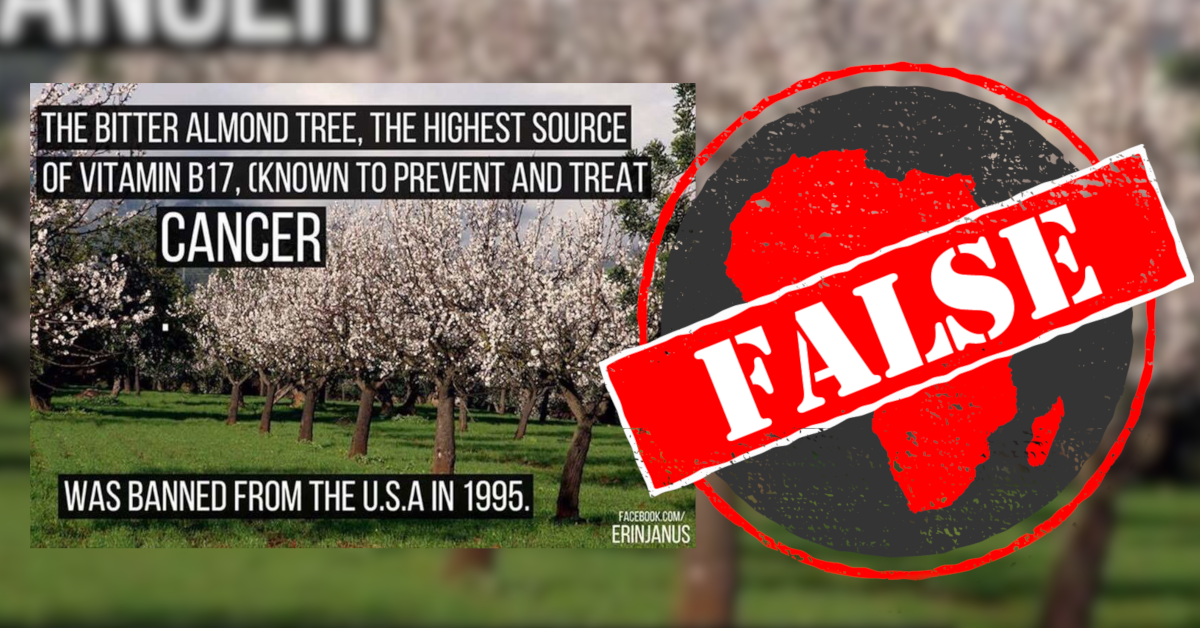 What are bitter almonds?

Bitter almonds are nuts that grow on the amara variety of almond trees.

Bitter almonds contain amygdalin, which is also found in lima beans, apricot and cherry seeds, clover and sorghum. The artificially made version of amygdalin is laetrile.

The substance has been called “vitamin B17”, but it’s not a vitamin.

According to the US’s National Cancer Institute, amygdalin was used as a cancer treatment in Russia from 1845, and in the United States in the 1920s.

Claims that amygdalin and laetrile can treat cancer are not backed up by reliable scientific evidence.

In 2015 the Cochrane Library, which collects independent evidence to help informed healthcare decisions, published a review “to assess the alleged anti‐cancer effect and possible adverse effects of laetrile and amygdalin”.

The review found that the apparent benefits of laetrile are not supported by controlled clinical trials. It also pointed out that laetrile contains cyanide, a poison that can cause serious side effects, especially if eaten.

The Food and Drug Administration (FDA) is a US government agency responsible for protecting public health.

In the 1980s the FDA restricted laetrile because of the lack of evidence of its effectiveness in treating cancer and the risk of its side effects, according to the Cochrane Review. The European Commission has also banned its use as a medicine.

The FDA has issued a number of warnings to companies promoting amygdalin and laetrile as cancer treatments. But bitter almond trees are not “banned” in the US, and continue to be grown and sold.

Africa Check found no evidence that the bitter almond tree was banned in the US in 1995. But promoting the nut as a cure for cancer is prohibited. – Butchie Seroto