Several videos doing the rounds on Facebook in South Africa appear to show different metal objects sticking to people who have recently received the Covid-19 vaccine.

One video shows a phone stuck to a man’s arm, apparently after he received the second jab of the vaccine against Covid.

Another shows a metal spoon sticking to a woman’s arm, apparently also  after she received the vaccine.

A third video, with people speaking isiZulu, shows a woman putting a coin against a man’s arm and it also sticking to him.

It’s unclear whether the man and woman in the third video are in fact South African, as the dialogue is out of sync with the people speaking, so may have been recorded over a video from elsewhere.

The man and woman in the first and second videos sound Nigerian, though this could not be immediately confirmed.

These videos have been widely shared since vaccines against Covid-19 first became available in South Africa, with claims the vaccines contain metals or microchips that make the site of injection magnetic.

But could this startling claim be true? We checked. 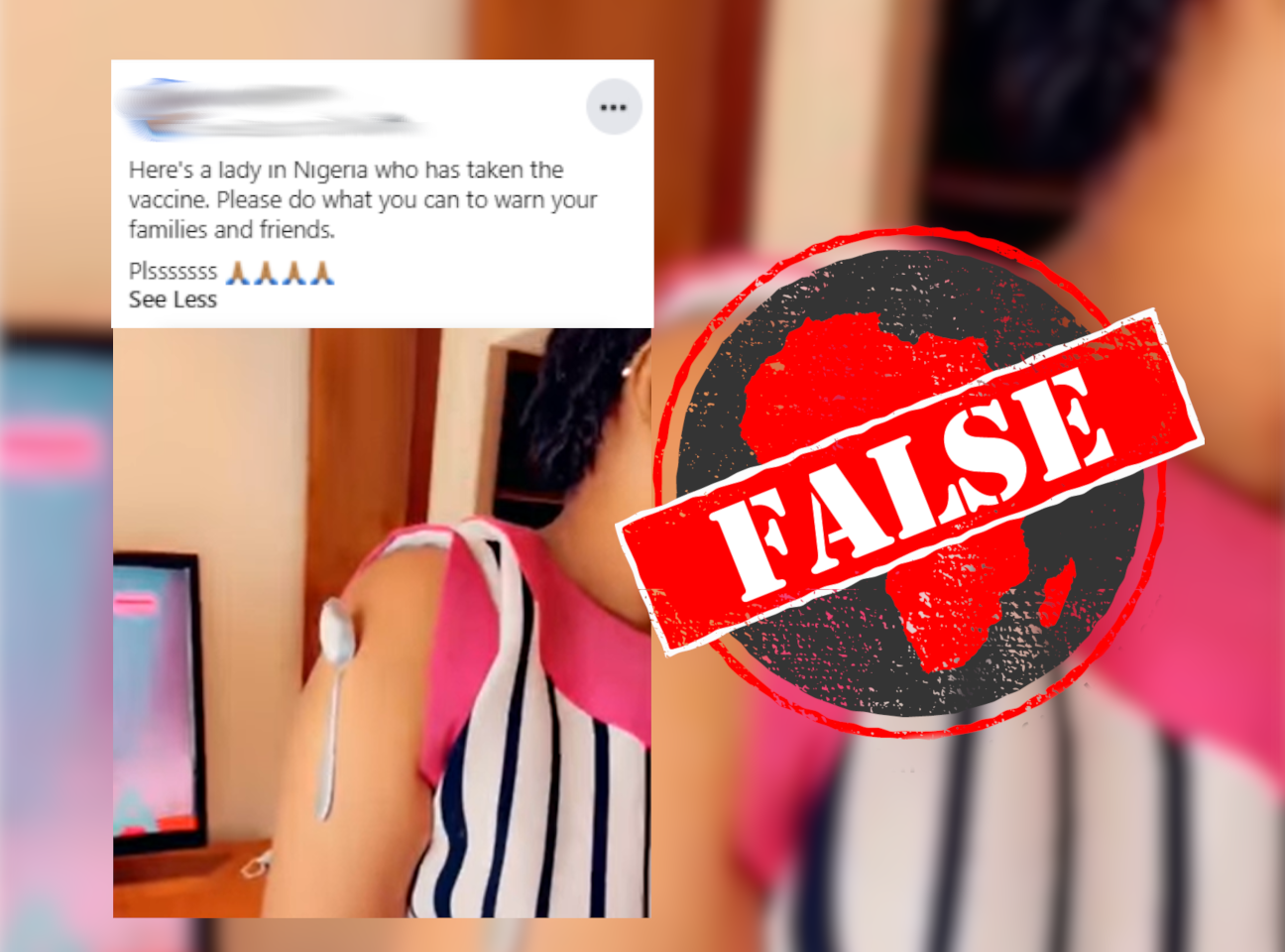 The South African government news agency put out a statement about the reported phenomena on 11 June 2021, in response to the viral videos.

It started: “The KwaZulu-Natal Department of Health has welcomed input from top global health experts, who have dismissed purported links between the Covid-19 vaccine and magnetic fields.”

An earlier statement by the South African government on 9 June quoted Dr Stephen Schrantz, an infectious diseases specialist at the University of Chicago. He said: “No, getting a Covid-19 vaccine cannot cause your arm to be magnetised. This is a hoax, plain and simple”.

“There is absolutely no way that a vaccine can lead to the reaction shown in these videos posted to Instagram and YouTube. It is better explained by two-sided tape on the metal disc being applied to the skin, rather than a magnetic reaction,” he said.

The government also quoted Dr Thomas Hope, vaccine researcher and professor of cell and developmental biology at Northwestern University Feinberg School of Medicine in the US, who also debunked the claim.

He said: “This is impossible. There’s nothing there [in the vaccine] that a magnet can interact with, it’s protein and lipids, salts, water and chemicals that maintain the pH. That’s basically it, so this is not possible.”

Nothing magnetic in vaccine ingredients?

In order for these metal objects to stick to where someone has received the vaccine jab, the ingredients would have to have a metal base.

According to the WHO, none of the ingredients in Covid vaccines have a metal base.

The WHO also says that many of the components used in vaccines “occur naturally in the body, in the environment, and in the foods we eat”.

The US Food and Drug Administration (FDA) also lists the ingredients for each of the Covid-19 vaccines approved around the world.

The various ingredients in the Pfizer-BioNTech, Moderna and Johnson & Johnson vaccines are listed by the FDA. None of these vaccines list any metal-based ingredients.

The US Centres for Disease Control & Prevention (CDC) notes that “Covid-19 vaccines do not contain ingredients that can produce an electromagnetic field at the site of your injection”.

(Note: Only the Johnson & Johnson and Pfizer vaccines have been administered in South Africa at the time of writing.)

Doses so small, even if were magnetic, wouldn’t attract objects shown in videos

Some fact-checking organisations have also made the point that even if the vaccines did contain magnetic metals, one dose could not possibly cause a magnetic reaction.

Medical professionals at the Meedan Health Desk have explained why: “The amount of metal that would need to be in a vaccine for it to attract a magnet is much more substantial than the amounts that could be present in a vaccine's small dose.”

An expert the BBC spoke to gave some ways one can get metals to appear to stick to the skin. These include surface oils or tension and “trickery like band-aid residue or other sticky residue”.

The claim that Covid-19 vaccines can cause a person to become magnetic at the vaccination site has been widely debunked by several other fact-checking organisations. It is simply not possible.