No, don’t use garlic to lower blood pressure

A post shared on Facebook in Nigeria claims that garlic can be used to lower high blood pressure.

It also credits the World Health Organization (WHO) with saying garlic helps to reduce blood pressure in patients with moderate hypertension.

“Garlic works in a way to increase the size of the arteries, which makes it easier for blood to pass. In addition, due to its diuretic properties, it reduces the volume of water in the body and therefore blood pressure,” reads part of the post.

The post does include an unusual warning: “Be careful, even regular consumption of garlic does not exempt from appropriate treatment, especially in people with severe hypertension.”

But is there any scientific evidence that the bulbous flowering plant can be used to manage high blood pressure? 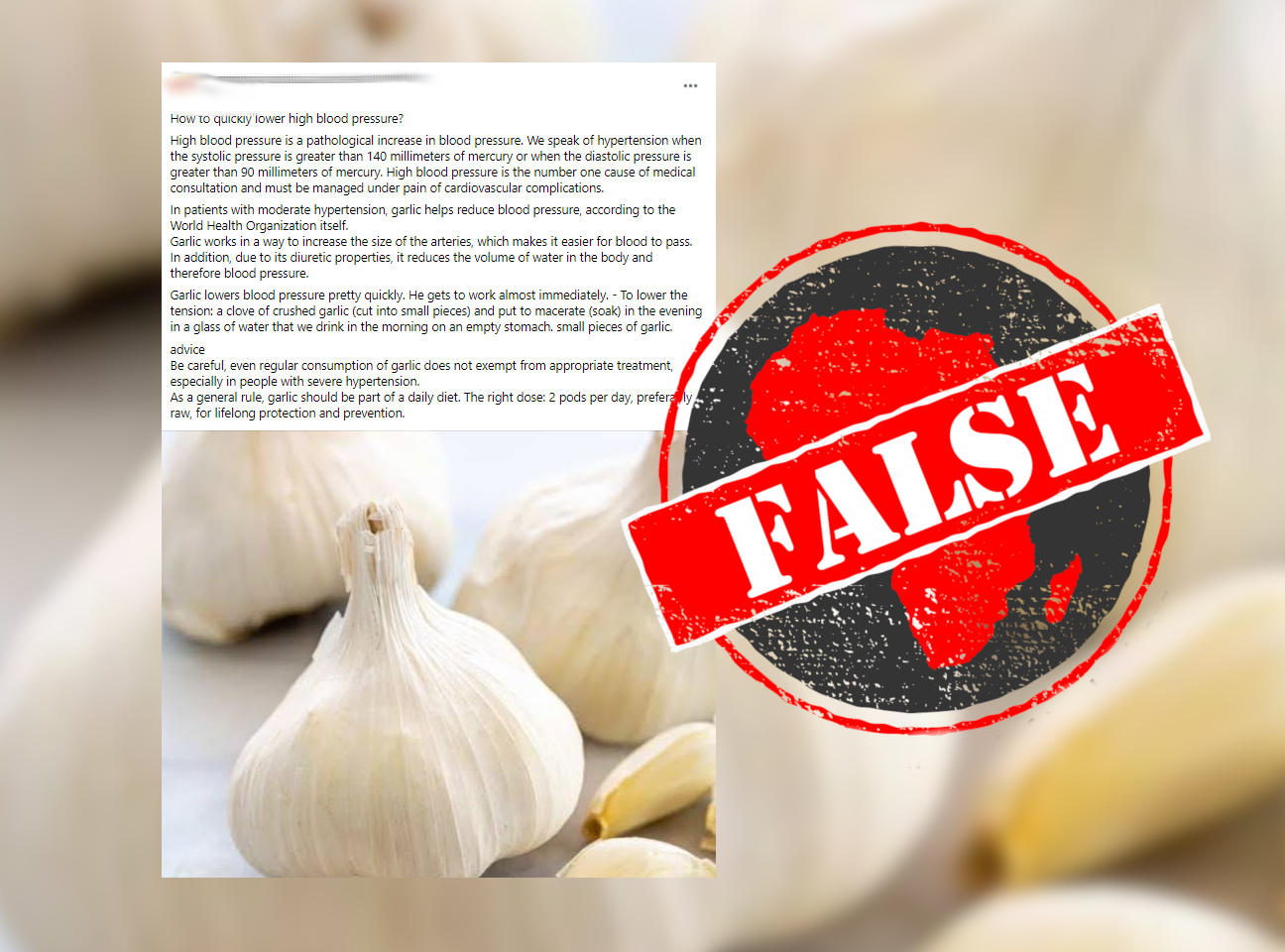 According to the WHO, high blood pressure, also called hypertension, is when the force exerted by blood pushing against the walls of the arteries is higher than what is considered normal.

Blood pressure is measured in units of millimeters of mercury, or mmHg. It is recorded as two numbers, the systolic or upper value first, followed by the diastolic or lower value.

About 1.13 billion people around the world have high blood pressure, with the majority living in low- and middle-income countries. This leads to about 9.4 million deaths annually, says the WHO.

‘Not approved by health authorities’ – expert

Some studies have documented the potential of garlic in lowering high blood pressure in a similar way to standard medication. A review of trials involving garlic concludes that the vitamin B status of an individual is “an important factor for the responsiveness of high blood pressure to garlic”.

But Basden Onwubere, a professor of medicine at the University of Nigeria in southeastern Nigeria, was sceptical. He told Africa Check: “Such prescriptions cannot be made by doctors.”

“There are studies that have been published about the use of garlic in managing some health conditions but I am not aware of any traditional medicine that has been approved officially by Nafdac for use in managing high blood pressure,” he said.

Nafdac is Nigeria’s National Agency for Food and Drug Administration and Control, responsible for regulating and controlling drugs, among other substances.

Onwubere said: “Until that [approval] becomes available, what we are using now is the orthodox way of managing hypertension. This is medication and advice on managing the patient’s diet.”

Africa Check has also checked claims on Facebook that ginger or ginger tea can prevent heart attack and stroke, and that mixing lemon, ginger and garlic cures high blood pressure.

Like this claim, we found no conclusive evidence to support these. Experts advise those with high or elevated blood pressure to ignore miracle cures promoted on social media and seek proper medical care.

No, putting garlic in your vagina overnight won’t cure candidiasis