Disclosure: The Bill and Melinda Gates Foundation is one of Africa Check’s funders, providing 11% of our income in 2019.

Some of the posts have been viewed millions of times on Facebook alone, and the video was sent to Africa Check on WhatsApp.

In the video, Young and several other people say all registered medicines are being used by a group of hidden “Luciferian people” to “eliminate a third of the population of the world”, particularly in Africa.

“These are not my words, these are Bill Gates’ words,” Young says in the video. But did Gates really say this? Is there evidence for any of the claims made in the clip? And what is the broader context of the video? 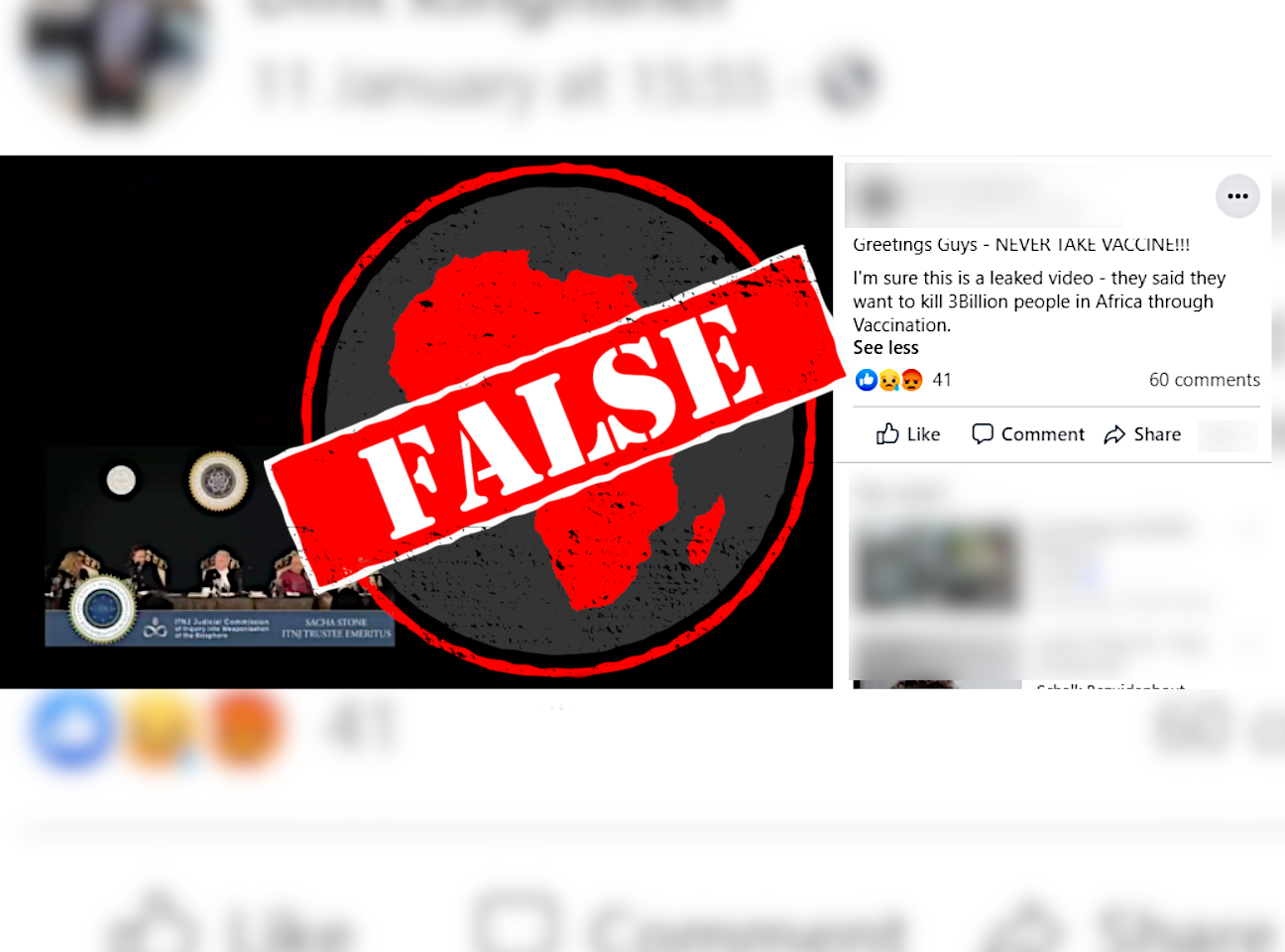 There is no evidence Bill Gates has ever said “at least 3 billion people need to die” or anything similar about the Covid-19 pandemic or any other event.

Young gives no evidence of his own, and does not say where or when Gates supposedly said this. Instead he implies the quote is publicly accessible. Africa Check was unable to find any evidence of the quote.

The Covid-19 pandemic has spawned many conspiracies falsely connecting Gates to the pandemic, some suggesting that Gates would use a vaccine for the disease for sinister purposes.

Africa Check has debunked a number of these claims, as have other fact-checking organisations.

One false claim misquotes Gates as “predicting” 30 million deaths from a theoretical disease. Gates was quoting a simulation assessing the potential impact of a large disease outbreak, and the number is still 100 times smaller than the 3 billion claimed in the Facebook video.

Another potential source of the claim is an often misquoted segment of a 2010 TED Talk in which Gates says: “The world today has 6.8 billion people. That’s headed up to about 9 billion.” Gates goes on to say that effective public health measures, including vaccine programmes, “could lower that by, perhaps, 10 or 15%.”

Gates was referring to a United Nations finding that people choose to have fewer children when child mortality is low. He did not mean 10% to 15% of people would die. But even if he had, 15% of 9 billion would be 1.35 billion people, less than half of the 3 billion Young implies.

These claims originally targeted hormonal birth control methods, falsely claiming that they cause sterilisation and preying on legitimate fears of forced sterilisation in African countries.

Self-appointed judges, no evidence for claims

Although the Facebook posts show just a short clip of the video, some sharing it suggest it has been “leaked” from a longer video.

But the video was first posted – not leaked – by a group calling itself the International Tribune for Natural Justice, or ITNJ. The organisation is made up of volunteers with no legal authority and holds “judicial commissions of inquiry” into various topics.

The ITNJ claims to have no “predetermined views” or “any political agenda”, but its “commissions” regularly promote disproven conspiracy theories.

The ITNJ’s “chief counsel” has repeated baseless claims of the existence of a satanic cabal that drinks the blood of children. These are core to the baseless QAnon conspiracy.

The chief counsel has also promoted the disproven “PizzaGate” conspiracy theory, which grew into the QAnon conspiracy.

In the video, Young and other members of the INTJ repeat a claim that Gates is a member of a “Luciferian” group that aims to sterilise or kill much of the world’s population. When asked, Young is unable to provide any details.

Young is credited as a doctor, but is not licensed to practise medicine. He has been found guilty of several counts of practising medicine without a licence, among other offences.

He has a doctorate of philosophy in “holistic nutrition”. But he has admitted that he has no “post-high school educational degrees from any accredited schools” and is not a medical doctor, a “naturopathic doctor” or any kind of specialist.

Young has also been sentenced to time in prison and forced to make large payments to former patients for “pain and suffering”, among other damages.

His “treatments” for diseases such as terminal cancer have included “intravenous infusions of baking soda”, have no basis in science, and are dangerous.

Young has no expertise that would give him a better understanding of medicine than any lay person, nor do the other members of the ITNJ “tribunal”.

Actual medical experts must certify that a medicine is both safe and effective before it becomes publicly available in South Africa. You can read Africa Check’s factsheet about this process here. Details about Nigerian protocols can be found here.

The claim that Bill Gates said “at least 3 billion people need to die” is wholly unsubstantiated, and seems to be entirely false.