Magufuli had a complex legacy and was particularly controversial for denying there were any Covid-19 cases in Tanzania.  This was despite claims to the contrary from Tanzanian doctors and religious and human rights groups within the country.

A widely shared Facebook post claims that “there has been no conclusive proof that Covid exists”, and that, as a PhD recipient, Magufuli would have known this.

The post claims that a set of principles for verifying the existence of a disease have not been met in any studies of Covid-19.

It reads: “John Magufuli, a PhD holder in chemistry, likely knew of these various studies, hence he did not accept the existence of Covid-19 from a scientific stand point.”

But are these claims accurate? What process would be required to prove the existence of Covid-19, and could Magufuli have “known” this process had not been followed? 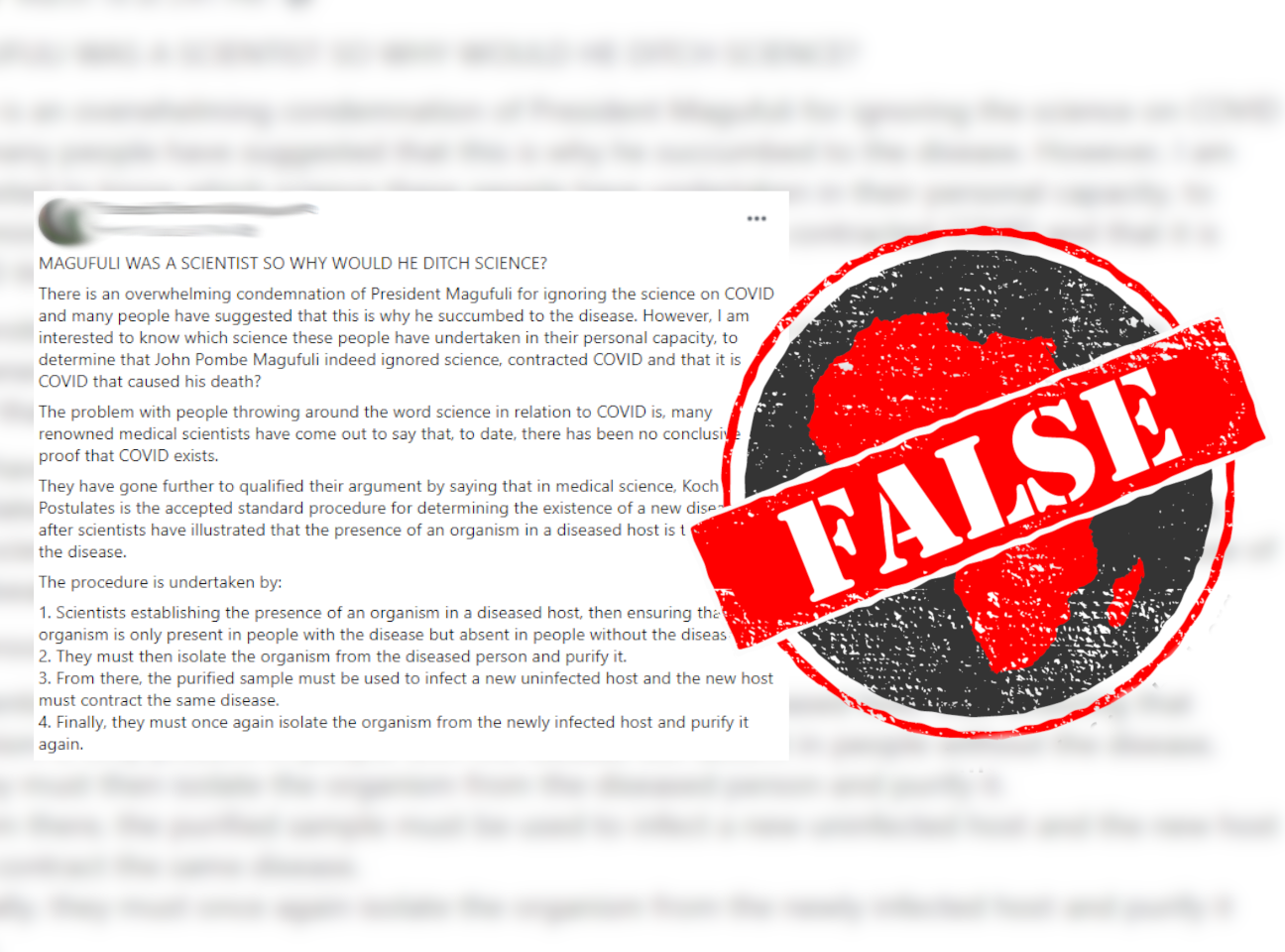 Sars-CoV-2 has been isolated, shown many times to be cause of Covid-19

Guidelines called “Koch’s postulates”, which the post cites as “the accepted standard procedure for determining the existence of a new disease”, were proposed in the late 1800s by a bacteriologist named Robert Koch.

At the time, these postulates were an important development, but they have become outdated as medicine has advanced.

Koch proposed that to prove an organism causes a disease, scientists must first detect that organism in a sick person or animal, isolate it and culture it in a laboratory, and then reintroduce it into the body of a healthy subject. If the healthy subject contracts the disease, then the organism is known to be the cause of the disease.

There are multiple problems with Koch’s postulates, including the fact that they were proposed before the discovery of viruses. Viruses cannot survive outside of a host, and so newer and more reliable methods of verifying the cause of a disease have been proposed.

Modern versions of Koch’s postulates are more complex and involve isolating sequences of genetic material from the pathogen which causes a disease.

The genetic sequence of Sars-CoV-2, the virus which causes Covid-19, has been isolated several times and versions of the genome have been available to the public since early 2020.

Many of the studies that have isolated the virus have even performed steps similar to Koch’s postulates. One example is a May 2020 study which isolated the virus from the urine of an infected patient and showed that it could reinfect healthy cells.

The virus has also been photographed several times under an electron microscope. The images can be seen in this May 2020 article in the Lancet and as released by the US Centers for Disease Control and Prevention.

There is plenty of scientific evidence that the virus which causes Covid-19 exists.

Magufuli not doctor of medicine, medical doctors dispute his claim

Magufuli did receive both a masters degree and a doctorate from the University of Dar es Salaam but Magufuli studied chemistry, and was not a medical doctor or an infectious diseases specialist.

Africa Check could find no evidence that Magufuli himself ever claimed that Koch’s postulates had not been met for Covid-19. But the president did make claims about the disease which medical experts said were incorrect.

The claim that Koch’s postulates had not been met has also been repeatedly debunked by fact-checking organisations and medical experts.

One microbiologist from the University of Auckland in New Zealand said that the claim and others like it might cause further deaths by “undermining attempts to bring the pandemic under control”.

The World Health Organization was among the groups calling for Magufuli to improve Tanzania’s response to the pandemic shortly before the president’s death.