Soon after, a claim that their deaths were caused by Covid vaccines started spreading online.

A screenshot circulating on Facebook shows a photo of the two. “Shane Warne, Rodney Marsh. Both fit and strong,” text above the photo reads. Warne was 52 and Marsh 74.

“Both died on the same day. Both triple jabbed. Both had BOOSTER shots 2 days before,” the screenshot adds.

It ends with the claim that “mainstream media is only talking about Shane and not much about Rodney as people would put two and two together”.

The screenshot’s implication is that Covid vaccines killed both cricketers. But that’s not true. 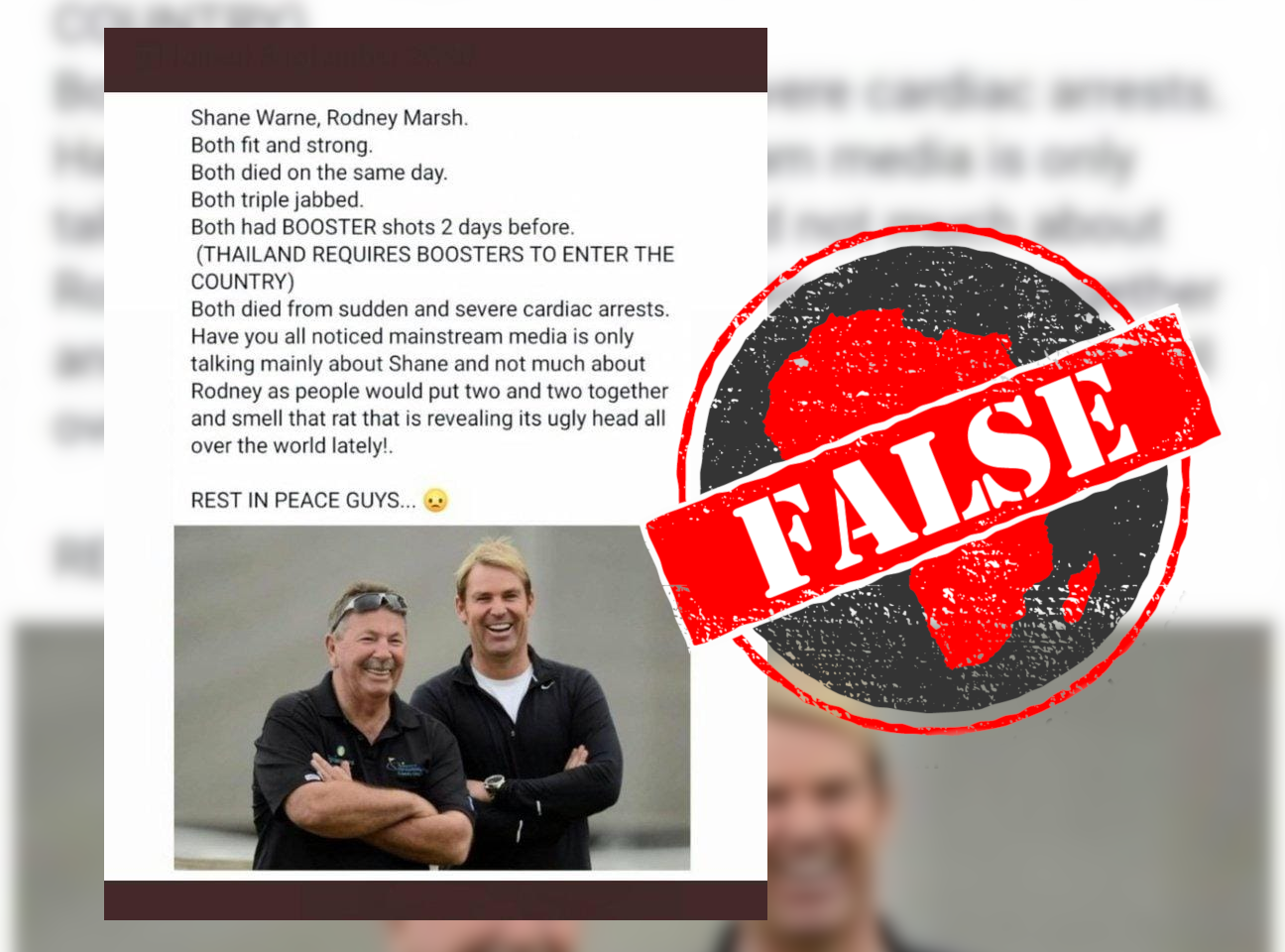 Legendary wicketkeeper Rodney “Rod” Marsh was pronounced dead on 4 March at Australia’s Royal Adelaide Hospital. He had a heart attack on 24 February and was in a critical condition until his death.

Warne tweeted his memories of Marsh early on the day of 4 March. But later, on the same day, Warne was found unresponsive in Ko Samui, Thailand. He had been on holiday. His death was announced that evening on his Facebook page. An autopsy found that Warne had died of natural causes.

By 4 March 2022, 57% of Australians aged 16 or older had received three doses of a Covid vaccine. But it’s unlikely that the two sportsmen “had BOOSTER shots 2 days before” their deaths.

According to a statement from his family, Marsh had been put in an induced coma after his heart attack, a week before his death, making the claim implausible. There is no evidence that Marsh’s doctors gave him an additional dose of a Covid vaccine before his life support was turned off.

But even if the claim is that Warne and Marsh got booster shots two days before they died, there is no evidence for this.

Australia began its formal booster vaccine programme on 8 November 2021, although the country’s health minister noted that 173,000 booster doses had already been administered at that point. Boosters had first been made available (to severely immunocompromised people) on 11 October 2021.

The post claims that “THAILAND REQUIRES BOOSTERS TO ENTER THE COUNTRY”, implying that Warne, who was in Thailand when he died, must have received a booster dose before entering. But the Tourism Authority of Thailand only says in its requirements for travellers that people “18 years of age and older must be fully vaccinated for COVID-19 with an approved vaccine at least 14 days before travelling to Thailand”.

It does not say whether three doses of a vaccine are required to be considered “fully vaccinated”, but the requirement that travellers be vaccinated at least 14 days before travelling suggests that Warne would not have received a dose just two days before his death.

Warne had received at least two doses by August 2021, when he contracted Covid-19, and tweeted: “I’ve been double vaccinated so the Covid symptoms are mild”.

Warne and Marsh are not the first celebrities whose deaths have been attributed to Covid vaccines.

Another former professional sportsperson, the baseball player Hank Aaron, was one of several US celebrities – including rapper DMX and boxer Marvin Hagler – whose deaths have been falsely attributed to vaccination.

These false claims tend to be made about celebrity deaths whether or not there is evidence that the celebrity was vaccinated.

South African actor Ben Kruger and producer Shona Ferguson were both supposedly killed by Covid vaccines. Both actually died from the disease itself.

Speculation about Warne and Marsh has been popularised by Pete Evans, an Australian chef turned anti-vaccine conspiracy theorist. Evans connected Warne’s death to “these injections” on his official Telegram channel, and in a public Zoom call.

Evans is no stranger to controversy. Over the past two years he has (among other controversies) been banned from Facebook and Instagram for publishing false information about Covid. He’s also parted ways with a TV channel after advertising a machine he claimed could eradicate Covid, and was dropped by another channel as well as by business partners after publishing a white supremacist symbol on social media.

Other conspiracy theorists have made more explicit claims connecting the deaths of Warne and Marsh to vaccination. Again, the claims aren’t backed by evidence.

Covid vaccines are safe and effective. They prevent severe illness and death. And vaccinated people are less likely to infect other people with the disease.

All approved Covid vaccines have been through strict approval processes, which include clinical trials to determine their safety and efficacy. And research into how vaccines have performed in real world conditions has only confirmed that they are safe and effective.

As recently as January 2022, a meta analysis – research that combines the results of published papers to produce more reliable conclusions – of real-world studies of the effectiveness of Covid vaccines was published in the Journal of Infectious Diseases.

Covid vaccines have been demonstrated to be safe. The World Health Organization says that there is a potential relationship between some vaccines and rare cases of myocarditis (inflammation of the heart muscle) and pericarditis (inflammation of the membrane surrounding the heart). These are rare enough that, even in the demographics most strongly connected with the conditions, they occur in just 40.6 of every million fully vaccinated people.

These are rare enough that the WHO and other public health organisations have advised that the benefits of even those vaccines associated with these conditions “continue to outweigh the risks of myocarditis and pericarditis even among young people”.