A graphic shared widely on Facebook in February 2021 attributes a quote to Nigerian billionaire Aliko Dangote in which he accuses Kenyan deputy president William Ruto of corruption – in Tanzania.

“He flew to Abuja [Nigeria’s capital], back in 2014. He wanted my cement factory in Kenya. I was very welcoming to him and took him around the factories. He loved it but he wanted a KSh 385M bribe (1,341,080,394 Nigerian Naira) which was too much for us. I was shocked,” the graphic reads.

“I then went to Tanzania and his cronies and aides followed me there with similar demands and that's why we are exiting Tanzania.”

It then says: “Dangote continues to explain that it was DP Ruto’s bribe request that made him not  to start a cement firm that would employ thousands of his so-called ‘hustlers’ in Kenya. He has warned Kenyans on their plan to install him as the president come 2022.”

Text at the bottom of the graphic adds: “Aliko Dangote on his exit from the Tanzanian cement indursty [sic].” It’s headlined “No Ruto please” and shows a photo of Dangote.

But did the billionaire really say this? 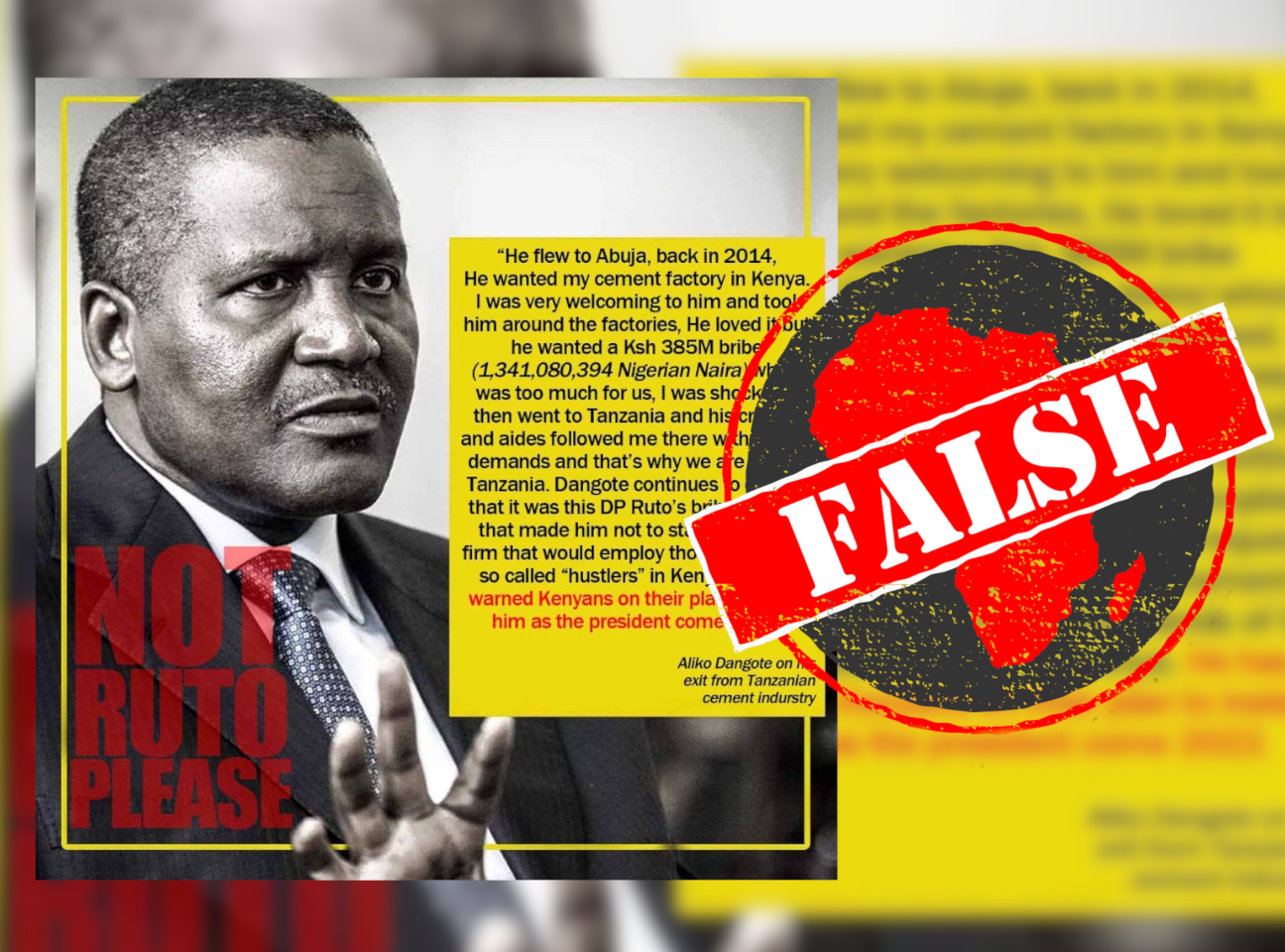 Dangote Cement is a top producer of the material with operations in 10 African countries, including Tanzania.

In 2018 reports emerged that Dangote had “shelved plans to extend his vast business empire to Kenya, after being put off by top decision makers in the country whom he has described as ‘more corrupt than Nigerians’.”

But there is no record of the billionaire making a specific allegation against Ruto.

Africa Check searched for the quote on Google and came out empty. Such an accusation would be big news, but it hasn’t been reported by any credible media organisation in either Nigeria or Kenya.

In 2016, Forbes reported that Dangote’s cement plant in Tanzania had been shut down due high energy costs and technical issues. But there was no mention of any politician, local or foreign, demanding bribes. And there were no reports that Dangote was “exiting Tanzania”.

The allegation against Ruto and his “cronies and aides” in Kenya would also be hard to swallow because Tanzania is a sovereign state where the company would be expected to operate under the country’s rules and regulations.

Dangote Cement still lists Tanzania as one of the African countries in which it operates.

Africa Check has reached out to the company for comment and will update this report when they respond.