A screenshot circulating on Facebook since late January 2022 claims that Nigerian presidential aspirant Bola Tinubu is only seven years older than his first daughter, Folashade Tinubu-Ojo.

“Tinubu’s First Daughter Folashade Tinubu is 62 years old while the father is 69, mathematically, Tinubu was 7 years old when he had his first daughter. This is very interesting and miraculous. #SayNoToAgeCheat,” it reads.

Tinubu, a leader of Nigeria’s ruling All Progressives Congress, was the governor of Lagos state from 1999 to 2007. He remains an influential politician.

His daughter Tinubu-Ojo took over the title of Iya l’oja (Yoruba for “mother of market traders”) of Lagos in 2013, becoming the leader of people trading in physical markets in the state. The position was previously held by Abibat Mogaji, her father’s mother.

But is Tinubu only seven years older than his daughter? 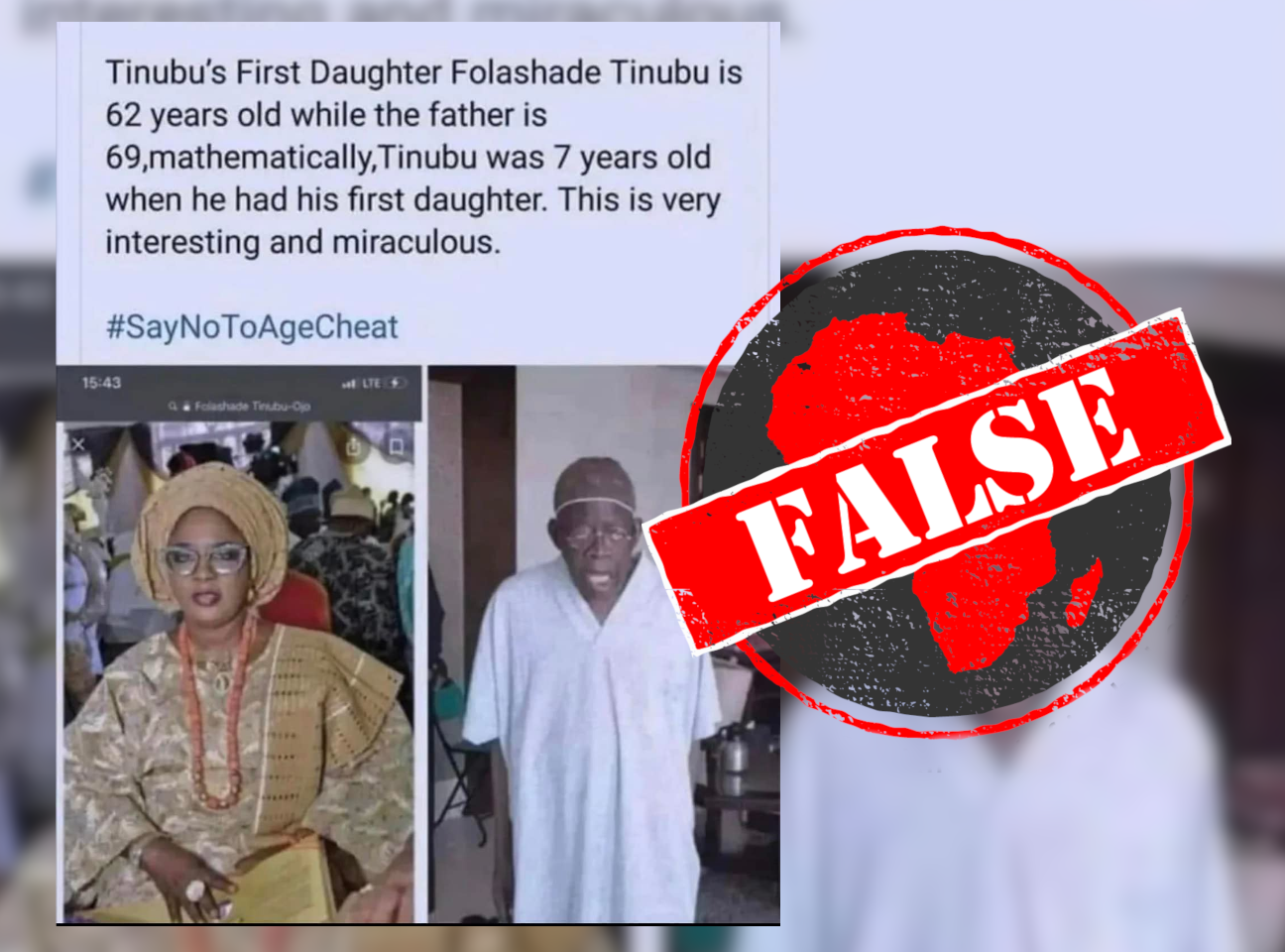 Tinubu’s age has been a subject of controversy. In March 2021, when he celebrated his 69th birthday, screenshots of a Wikipedia page showing his date of birth as 29 March 1942 started circulating online.

That would have made him 79. People inevitably started to claim he had shaved 10 years off his real age.

The Wikipedia screenshots and claims that Tinubu was an age cheat were posted on Twitter in response to a birthday tweet by Lagos governor Babajide Sanwa-Olu.

The controversy resurfaced when he declared that he would run for president next year. Nigeria is set to hold general elections in February 2023.

Wikipedia is an online encyclopaedia created and edited by volunteers across the world. So any Wikipedia article can be edited multiple times a day, by many different people. This makes the encyclopaedia a potentially unreliable source of information.

Biographies of prominent living people are often controversially edited. We checked the edit history on Tinubu’s Wikipedia page and found that it had been edited almost a dozen times since 1 January 2022.

On 15 January, Wikipedia administrators protected the page to prevent further vandalism. The current protected page gives his year of birth as 1952.

His daughter Tinubu-Ojo’s Wikipedia page has also been edited several times to change her age. In January alone, her birth year was changed to 1973, 1972, 1962 and even 1905. The changes have been so haphazard that at 3:24 pm on 22 January, her father’s name was changed to Niran Akunnu.

Outside Wikipedia, Tinubu’s birth year has been consistently recorded as 1952. That has been the year used in the annual Bola Tinubu Colloquium, which has marked his birthday for the past 12 years.

It is not clear exactly how old Tinubu’s first daughter is. But she is believed to be in her 40s.

We have found no conclusive evidence that Tinubu and his daughter’s dates of birth are just seven years apart.