“Most Ndebele people who run to neighbouring countries are wanted criminals in Zimbabwe” so Mnangagwa “is not surprised” Zimbabweans are linked with crime in South Africa.

This is what an 18 April 2022 Facebook post claims. It says Zimbabwean president Emmerson Mnangagwa made this statement to state-owned news outlet the Herald.

The post is formatted to look like a Herald headline, accompanied by a photo of the president. The headline reads: “President Mnangagwa told The Herald that most Ndebele people who run to neighbouring countries are wanted criminals in Zimbabwe so he is not surprised by news of Zimbabweans associated with crime in South Africa.”

The post has been attracting attention on South African social media – it has been viewed 1.4 million times since publication.

But is the headline real? Did the Zimbabwean president really make this statement, and was a story about it published in the Herald? We looked into it. 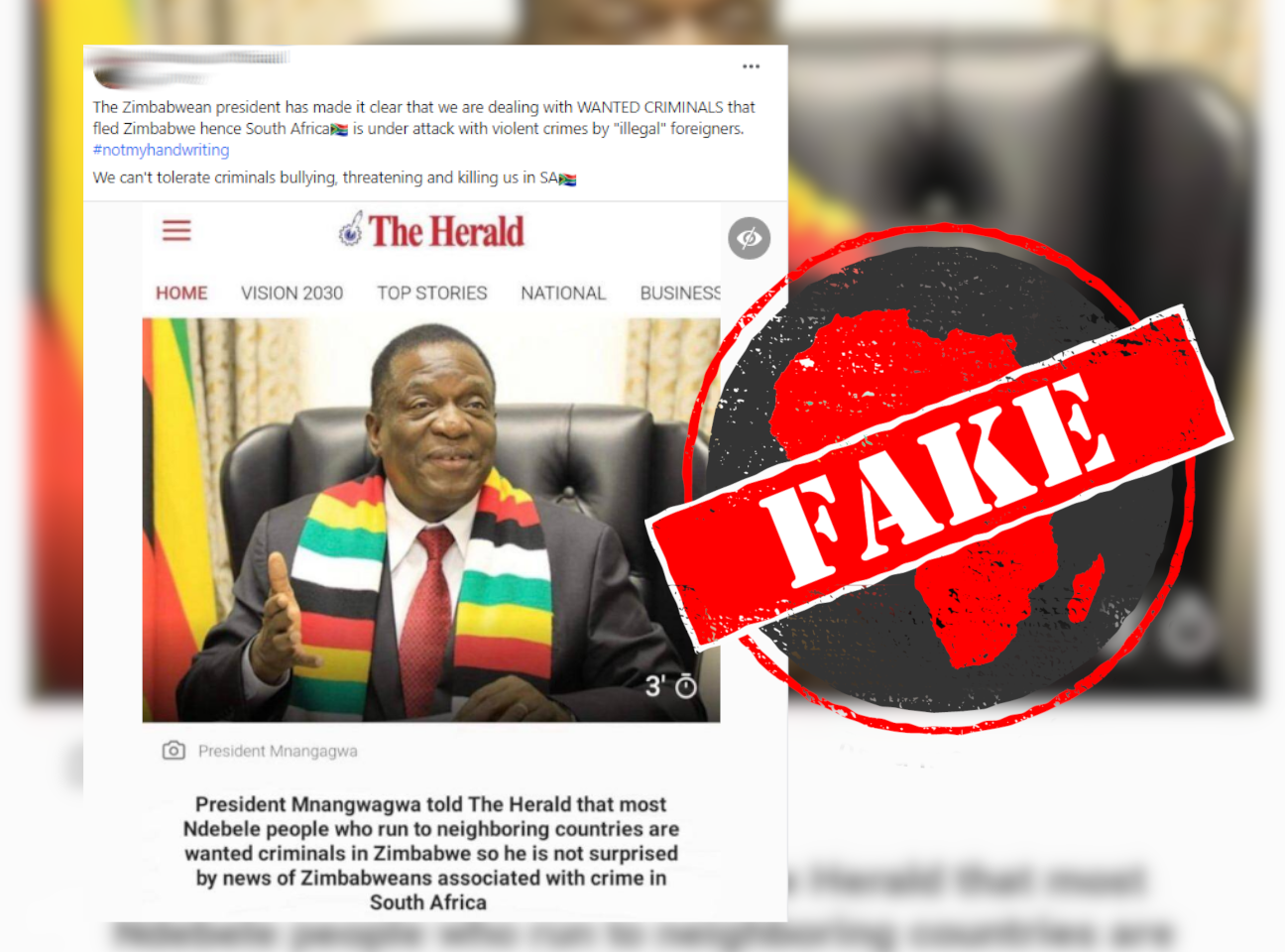 The graphic was uploaded by a Facebook account called Nhlanhla Lux Official. Nhlanhla “Lux” Dlamini is the leader of the controversial Operation Dudula movement.

The movement, founded in 2021, has gained notoriety in South Africa for campaigns that have targeted foreign nationals, particularly from other African countries like Zimbabwe.

Though the movement has previously stated it aimed to “remove illegal immigrants”, the group reportedly extended its campaigns to documented foreign workers in May 2022.

Headline is false, according to Herald and Zimbabwean government spokesperson

Africa Check could not find any record of such an article published by the Herald. The news outlet confirmed that the headline was false, tweeting from their official account on the day the post was published.

The outlet tweeted the original graphic with the caption: “Please note that this is fake.”

In another tweet, spokesperson for president Mnangagwa, Nick Mangwana, flagged the statement as false.  He tweeted: “Any sane thinking person would know that this is fake.”

And we could not find any record of president Mnangagwa having made the statement.

Mangwana’s tweet went on: “Let’s refuse to be divided by degenerates who believe there is a dividend to be gained from fissures in our Nation.” This appears to be a reference to the first part of the claim, that “most Ndebele people who run to neighbouring countries are wanted criminals in Zimbabwe”.

Mnangagwa has long been thought to have been involved in the Gukurahundi massacres in the 1980s. An estimated 20,000 people, mostly Ndebele, were killed and many others tortured and raped, in a wave of terror across Matabeleland in western Zimbabwe.

Mnangagwa has denied any direct involvement in the events, as did late former president Robert Mugabe.

However, there is no evidence that the current president made this inflammatory statement about Ndebele Zimbabweans being wanted criminals and committing crimes in South Africa.