“How to tell if your drink has been spiked or tampered with?” A graphic posted on Facebook and shared over 38,000 times says to look out for “excessive bubbling” and sinking ice. The drink could also change colour or become foggy, it says.

“Drink spiking is when someone has added something, for example, alcohol or drugs, to your drink, without you knowing,” according to an information sheet by the UK’s National Health Service, or NHS.

Drinks are usually spiked at pubs, clubs, restaurants, during dates and sometimes at homes.

South African president Cyril Ramaphosa has called gender-based violence  “another pandemic raging” in South Africa. He said: “With a brutality that defies any form of comprehension, the women of our country are being raped.”

But do these methods of checking if your drink is spiked work and can they keep you safe? We checked. 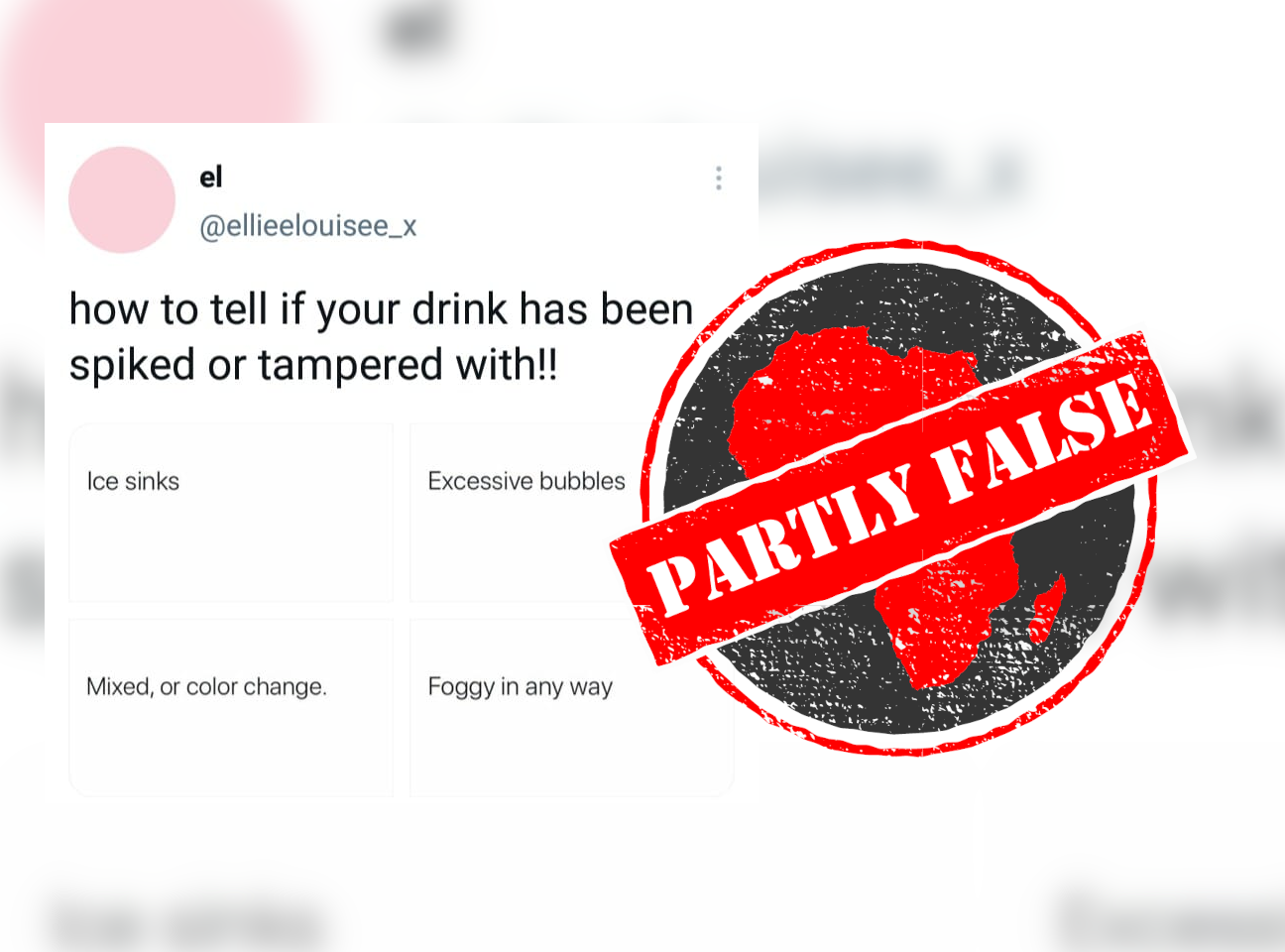 What drugs are used to spike drinks?

Alcohol is sometimes used to spike both non-alcoholic and alcoholic drinks, making the drink stronger than the drinker expects. As a depressant, alcohol slows down the messages from the brain to the body causing slower reflexes.

Rohypnol, gamma hydroxybutyrate (GHB) and ketamine are all known as “date-rape drugs”. Like alcohol, GHB is a depressant and causes sedation and sometimes amnesia.

Rohypnol is a benzodiazepine used to treat insomnia or as an anaesthetic. It also causes drowsiness, dizziness, slow reflexes, loss of motor control and amnesia for up to 12 hours.

Ketamine is another anaesthetic used to spike drinks. This drug causes relaxation, dizziness, detachedness, slow reflexes and hallucinations for up to two hours.

University of Pretoria pharmacology professor, Duncan Cromarty, told Africa Check that the effects of these drugs were usually exacerbated by alcohol.

Cromarty said that “only some of the ‘facts’ given for deciding a drink has been spiked are true, while others are far fetched”.

One of the far-fetched ideas was that the ice would sink. “The ice will definitely not sink after the addition of any drug,” said Cromarty. “If the ice is floating in the glass when the spike is added there may be some sugar-like crystals visible on the ice until it is washed off.”

The spike might cause some “bubbling”, but this would not be visible in a carbonated drink, Cromarty said. Carbonated drinks like soda and some sparkling wines have carbon dioxide gas in them that causes bubbles.

Some drugs used to spike drinks, such as GHB, won’t cause colour changes. Cromarty said that most drugs were colourless so would not change the colour of the drink.

But drugs that had colour might cause a change, he said. And “some of the less water-soluble drugs” might cause “murkiness, or cloudiness”.

But he warned that murkiness “will settle out fairly quickly”. And colour changes might not be seen if the drink was dark in colour, such as cola, or the room was dark.

Rohypnol was previously “a white tablet that dissolved without colour, taste, or smell” according to drugs.com. But “to help identify tampered drinks at clubs” the manufacturer changed it to an “oblong caplet that is light green with a blue core”.

“When dissolved in clear liquids the blue core will turn the clear liquid to blue.” But this may not be noticeable in dark liquids and generic versions don’t always have the blue dye.

Watch out for symptoms of spiked drinks

The Alcohol and Drug Foundation of Australia told us: “There is no one foolproof way to understand if your drink has been spiked. It could be colourless, odourless and tasteless.”

Rohypnol does not have a taste or a smell. But GHB and ketamine might have a soapy or salty taste, according to Cromarty.

The US Department of Health's Women’s Health Office website said a sign that your drink was spiked was that you “feel drunk even if you haven’t drunk any alcohol”. Or you “feel like the effects of drinking alcohol are much stronger than usual or more than you expect based on how much you drank”.

Cromarty said you might start to feel drowsy, numb and agitated. You might experience a change in heart rate, slurred speech and loss of muscle control. And these effects would increase with time.

The NHS advises that if you experience these symptoms, get help from a friend, relative or staff member, go to a safe place as soon as possible, and only go home with someone trustworthy.

But if you feel “very sleepy, vomit or have hallucinations” get medical help immediately.

No, 60% of women in Nigeria don’t give birth at traditional attendants’ facilities

To encourage more acceptance of alternative approaches to health, an expert claimed that in Nigeria, six in 10 women delivered their babies ...