Did Luc Montagnier, a French virologist and Nobel laureate, say all vaccinated people would die in two years? That’s the terrifying claim in a message doing the rounds on WhatsApp, Facebook and Instagram in May 2021.

Most versions show a photo of Montagnier and are headed: “All vaccinated people will die within two years”.

“Nobel Prize Winner Luc Montagnier has confirmed that there is no chance of survival for people who have received any form of the vaccine,” the most common version reads.

“In the shocking interview, the world's top virologist stated blankly: ‘there is no hope, and no possible treatment for those who have been vaccinated already. We must be prepared to incinerate the bodies.’ The scientific genius backed claims of other pre eminent virologists after studying the constituents of the vaccine. ‘They will all die from antibody dependent enhancement. Nothing more can be said.’”

Many versions of the message link to an article on the LifeSiteNews website, headlined: “Nobel Prize winner: Mass COVID vaccination an ‘unacceptable mistake’”.

But did Montagnier say all vaccinated people would die within two years? 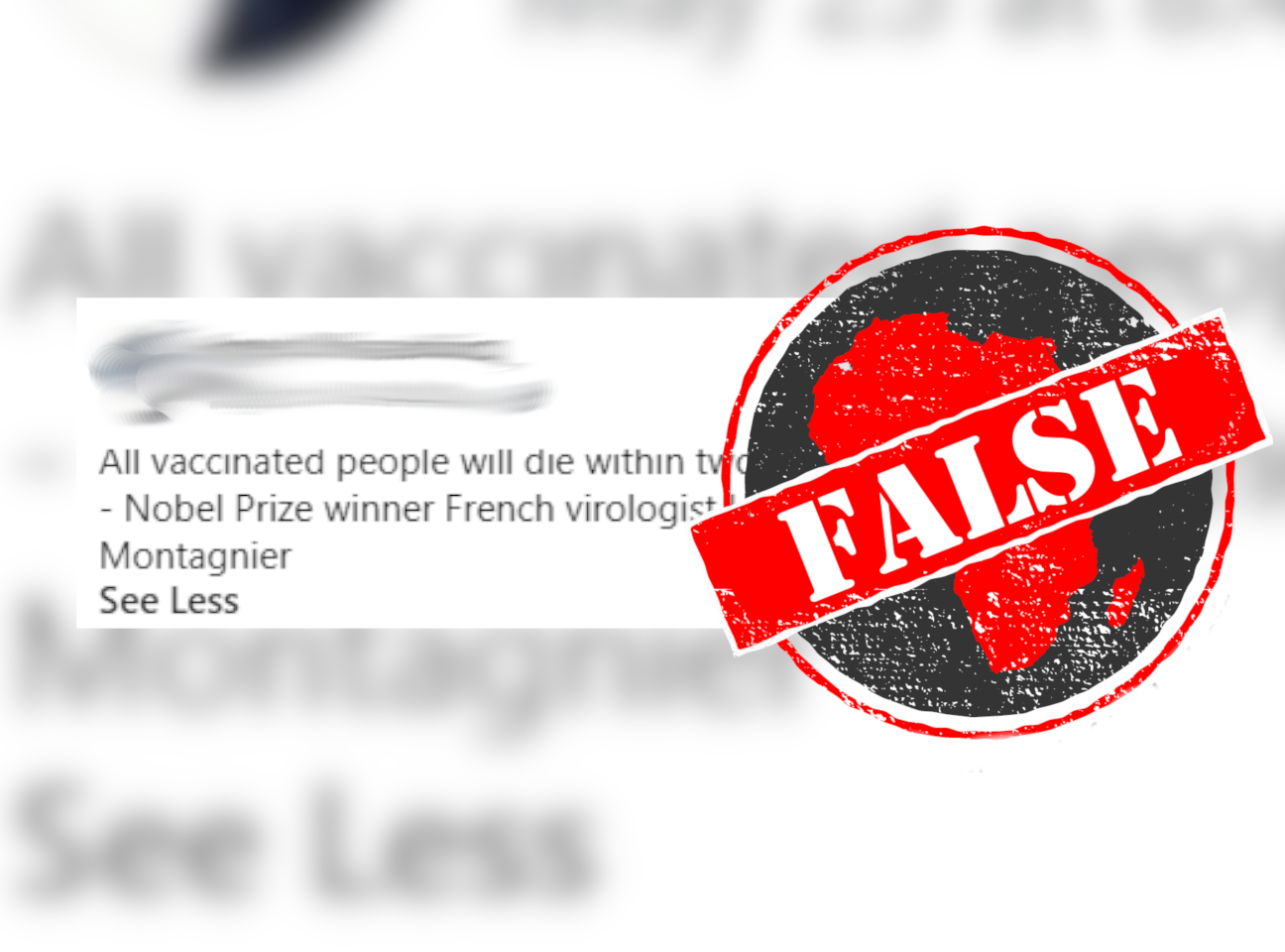 Born 18 August 1932, Luc Montagnier is a French research scientist with numerous achievements, including winning the 2008 Nobel Prize for Physiology or Medicine. He led the team that identified the human immunodeficiency virus (HIV) and the cause of acquired immunodeficiency syndrome (Aids).

The LifeSiteNews article, published on 19 May, quotes “an interview” with Montagnier “translated and published by the RAIR Foundation USA yesterday”. The RAIR Foundation describes itself as part of “a movement to reclaim our Republic from the network of individuals and organizations waging war on Americans, our Constitution, our borders and our Judeo-Christian values”.

According to LifeSiteNews, Montagnier “called mass vaccination against the coronavirus during the pandemic ‘unthinkable’ and a historical blunder that is ‘creating the variants’ and leading to deaths from the disease”.

“It’s an enormous mistake, isn’t it? A scientific error as well as a medical error. It is an unacceptable mistake,” it quotes Montagnier as saying. “The history books will show that, because it is the vaccination that is creating the variants.”

But nowhere in the article does Montagnier say all vaccinated people will die within two years, or that “We must be prepared to incinerate the bodies.”

On 27 May, LifeSiteNews added an update to its article.

“While LifeSiteNews has only reported what Montagnier has said, other scientists have rejected, in the strongest terms, his thesis that vaccines are causing dangerous variants,” the update begins.

It ends with: “Secondly, Montagnier did not say that everyone who received experimental Covid-19 vaccines would ‘all die’ within two years. This quote was falsely attributed to him in a fake news meme that has been widely distributed.”

We could find no evidence that Montagnier made these statements.