A video was posted on Facebook in September 2021 with an explosive claim about the Kenyan deputy president, William Ruto.

It appears to show Ruto calling for people to be forced off land in Kitale, a town in Trans Nzoia county to the north-west of the Kenyan capital Nairobi.

The video was shared in a public Facebook with nearly 50,000 members and has been viewed over 62,000 times.

This video is an interview with Ruto by Kenyan broadcast journalist Jeff Koinange. The old logo of K24 television can be seen in the top left-hand corner of the screen.

The clip is just 27 seconds long. Ruto says: “Who lived where? Whose land is ancestrally whose? For example the whole of Kitale, the Luhyas, the Kisiis, many of the Kalenjin sub tribes who were there today will have to move out because that land ancestrally belongs to the Pokot, the Cherangany, the Sengwer and the Sabaot.”

Koinange replies “that's a little extreme” and then Ruto says: “It is not extreme, it is in the constitution, I will challenge you to go and read it. That’s it.”

The video was shared on Facebook with a caption saying Ruto was a “monster in sheep clothing”.

But is Ruto suggesting only those who “originally” lived in Kitale should remain on the land? We checked. 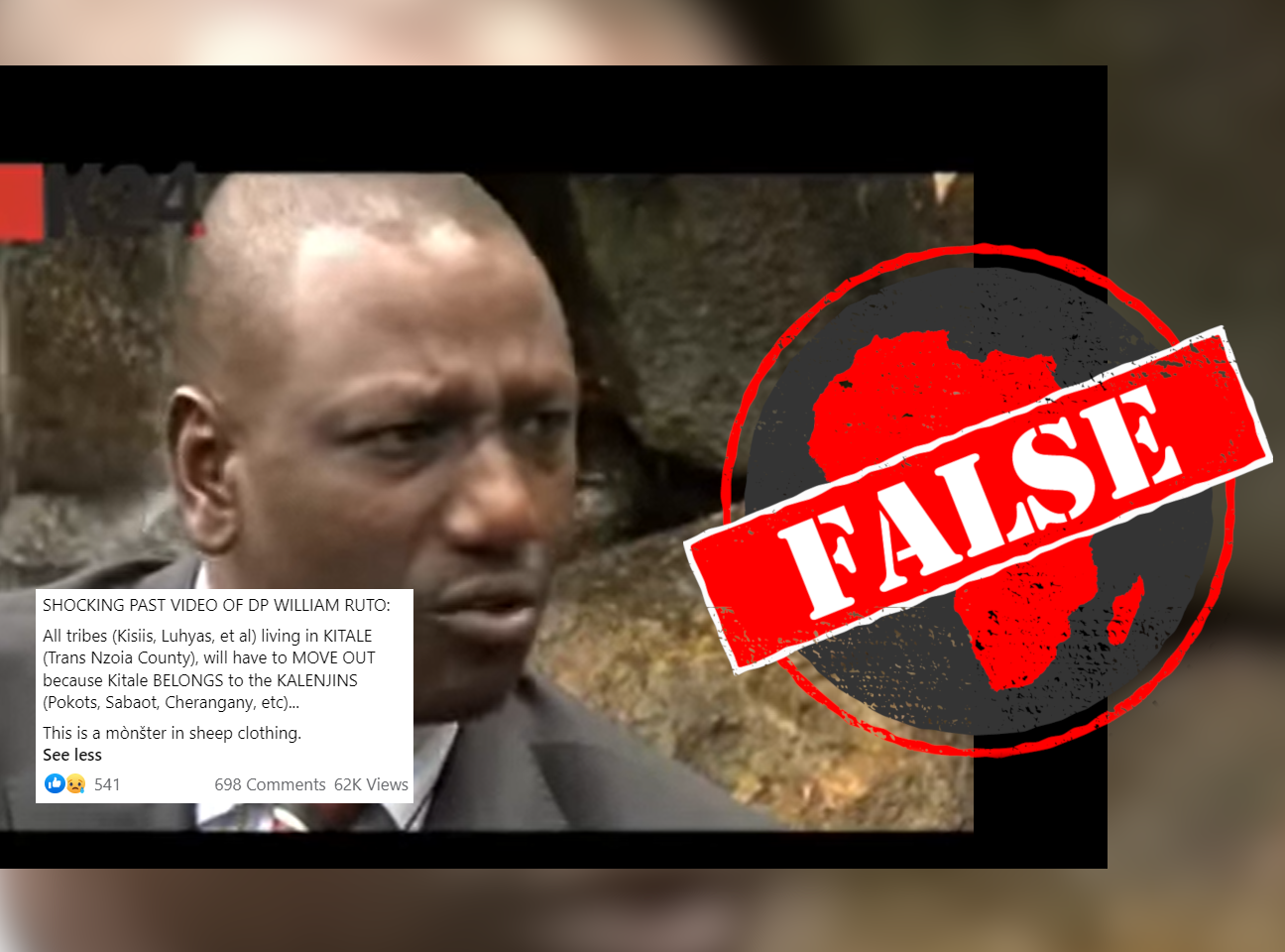 Out of context video

Land ownership is a source of conflict in Kenya and disputes have in the past escalated into ethnic and political conflict, especially during elections.

Ruto is running for president in the elections scheduled for August 2022. So sharing a video where he appears to be calling for people to be removed from a town with a history of land conflict is potentially incendiary.

We searched for the original video with the phrase “ruto jeff koinange interview” and found it on the K24 YouTube channel, published 13 May 2010. The original is nine minutes long.

At the time, Ruto was the minister of higher education, science and technology.

He was leading a campaign to vote “no” against the proposed constitution that was adopted later in 2010.

In the interview, Ruto was expressing dissatisfaction with provisions about land in the proposed constitution. He mentioned four issues he thought critical: constitutional protection of land, a proposed National Land Commission, ancestral land injustices and land taxation.

Ruto’s point opposite to claims

The video snippet shared again on social media in 2021 leaves out the part of the video that gives context. Ruto says he opposes provisions in the constitution that he thinks encourage the commission to review land ownership based on ancestry.

He said: “Number three which is much more serious, the constitution now provides for section 67 (2e), says the National Land Commission on its own initiative or through a complaint, will now begin to look at ancestral land injustices...”

“To me we are taking this country the wrong direction because in Rift Valley, for example, if you begin to talk about who lived where, whose land is ancestrally whose … For example, the whole of Kitale, the Luhyas, the Kisiis, many of the Kalenjin sub tribes who were there today will have to move out because that land ancestrally belongs to the Pokot, the Cherangany, the Sengwer and the Sabaot,” he observed.

He said this would be like giving the green light to land clashes.

“What will happen to the land clashes that we have had all these years in the Rift Valley? You are actually giving it now constitutional recognition that these people have genuinely been fighting over land which is ancestrally theirs,” he said.

He gave other examples, claiming a newspaper reported that the Maasai tribe were reclaiming Simeon Nyachae's land in Narok. Nyachae was a politician, government minister and businessman from Kisii county in southwestern Kenya. He died in 2021.

“Two weeks ago in the standard, Maasai were already claiming Nyachae’s land in Narok. They were telling him this is our ancestral land park and [to] leave. Do we really want to go that direction?” Ruto asked.

Ruto wasn’t endorsing the position, he was pointing out that it was dangerous.