“97% of overweight people do not know about the existence of this method” reads the caption on what appears to be a link to an article, posted on Facebook. Similar or identical posts have been shared several times, and promoted as adverts on the platform.

The graphic in the post shows the logo of the South African news site News24, a close-up photo of cocktail onions, and a photo of and quote attributed to controversial South African sports scientist Timothy Noakes.

The quote reads: “One teaspoon is enough, and you will lose 19 kg.”

The headline of the article appears to be “Tim Noakes told his method”.

Noakes is an emeritus professor of exercise science and sports medicine at the University of Cape Town, but has since the mid-2010s become better known for supporting a low-carbohydrate high-fat diet also known as banting. (Noakes has also attracted criticism for promoting false claims about vaccines and the Covid-19 pandemic).

Has Noakes endorsed a new weight-loss method or dietary supplement? We investigated. 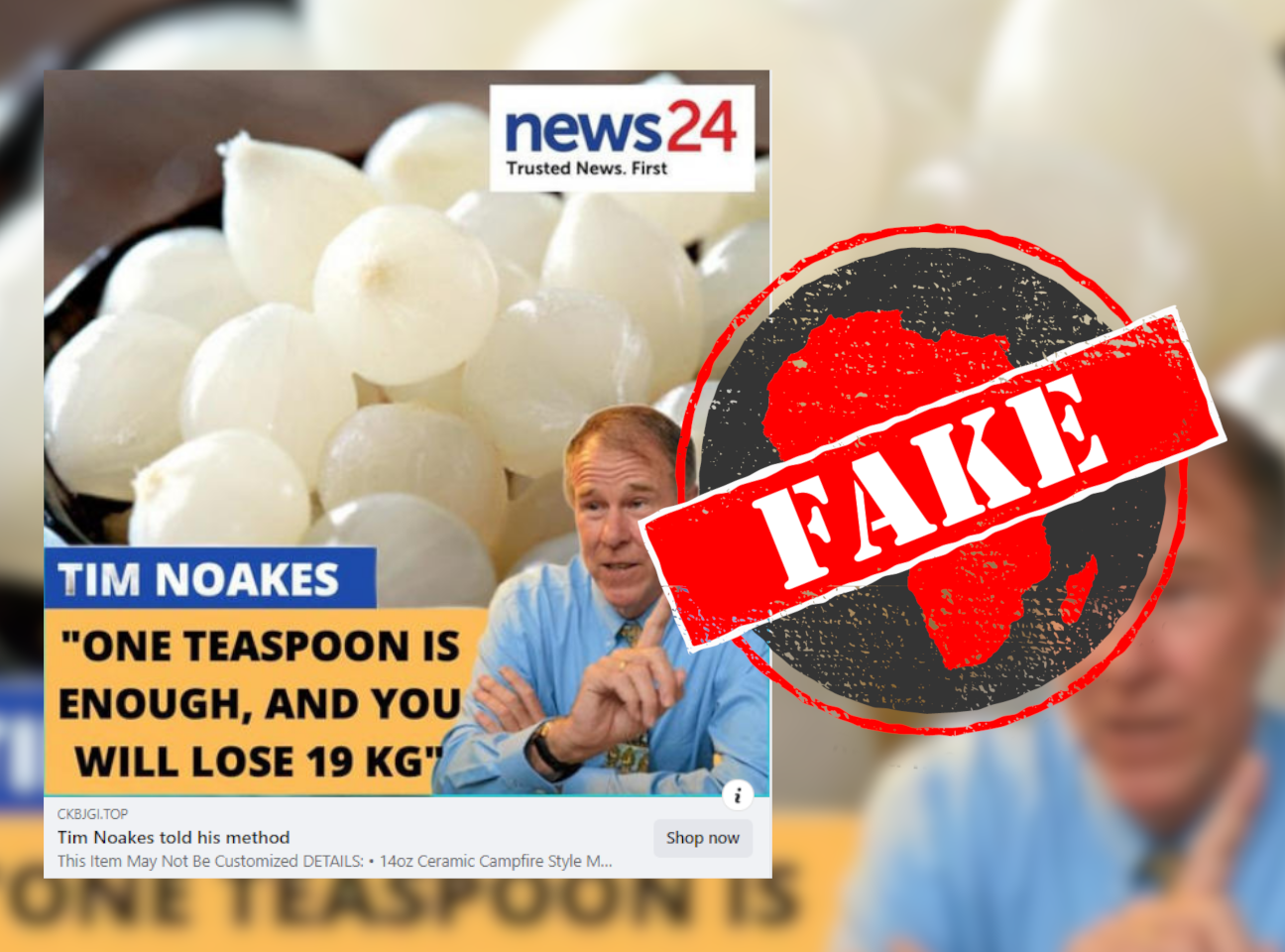 Not a real Facebook page, not a real article

The link is in fact a sponsored advert. It doesn’t redirect to any article on News24, but to a misleading website designed to look like Noakes’s Facebook page. But it’s not hosted by Facebook and is not endorsed by Noakes.

The fake Facebook page appears to show Noakes endorse a product called Keto Extreme Fat Burner. (Low-carbohydrate high-fat diets such as the one Noakes promotes are similar – though not identical – to ketogenic or  “keto” diets.)

On his official Facebook page and Twitter account he uses the name “Prof Tim Noakes”, not just “Tim Noakes” as it appears on the website. It should also be clear to anyone familiar with Facebook that this is not a genuine Facebook profile, from the layout and design elements of the page.

Next we turned to the News24 website. While Noakes was named in articles and opinion pieces a number of times since 2021, mostly for his promotion of Covid-19 misinformation, the last interview with him was published in 2019. We also found no mention of Keto Extreme Fat Burner, the product being advertised on Facebook, on News24.

The fake Facebook page includes several photos of Noakes and photos from Noakes Foundation events. But neither Noakes nor his non-profit corporation, the Noakes Foundation, have ever endorsed Keto Extreme. The product is not mentioned on any of their Facebook pages or on the foundation’s website.

The foundation published a statement on 13 April 2022 warning that “this marketing campaign is a complete fraud and payments to Keto Extreme are stolen”.

According to the foundation, the scam originated in 2020 when the fake product was named “Ketovatru” instead of “Keto Extreme”.

Notes on a scam

The fake Facebook page also includes a number of testimonials, supposedly from people who have lost weight taking Keto Extreme.

One testimonial appears to be posted by a Facebook user named “Caleb Ellington”. The testimonial also includes “before” and “after” photos.

It reads: “My wife left me for another man. But now I've lost 160 pounds thanks to Keto Extreme Fat Burner and my life has changed dramatically.”

But a reverse-image search of these photos reveals they were posted to image-sharing site Imgur in 2020 by someone with a different user name. The user’s account includes other photos of the same person, indicating that he is the person pictured.

But this user doesn’t credit Keto Extreme or any other weight loss product for the change in his appearance. He wrote on Imgur that it was down to a strict diet and exercise regimen. None of the details in the Imgur post matches anything in the fake testimonial.

The website does not link to any of the trial data or include any information that would make it possible to confirm the existence of the trial in a clinical trials registry.

The description of the trial is also suspicious, promising “increase of energy and physical activity” with no explanation of what this means or how it was measured.

There is no evidence that the product Keto Extreme even exists, or has any proven benefits. And it has not been endorsed by South African sports scientist Tim Noakes.