No, mix of tomato, lemon juice and ‘snail water’ can’t remove your appendix

A Facebook post on the page “Healing Herbal” claims that a home remedy leads to “total removal” of the appendix.

It says drinking a mixture of lemon juice, tomato juice and “snail water” can ensure that “you shall not die young” and “you will be free and more comfortable”.

Is there any truth to this claim? 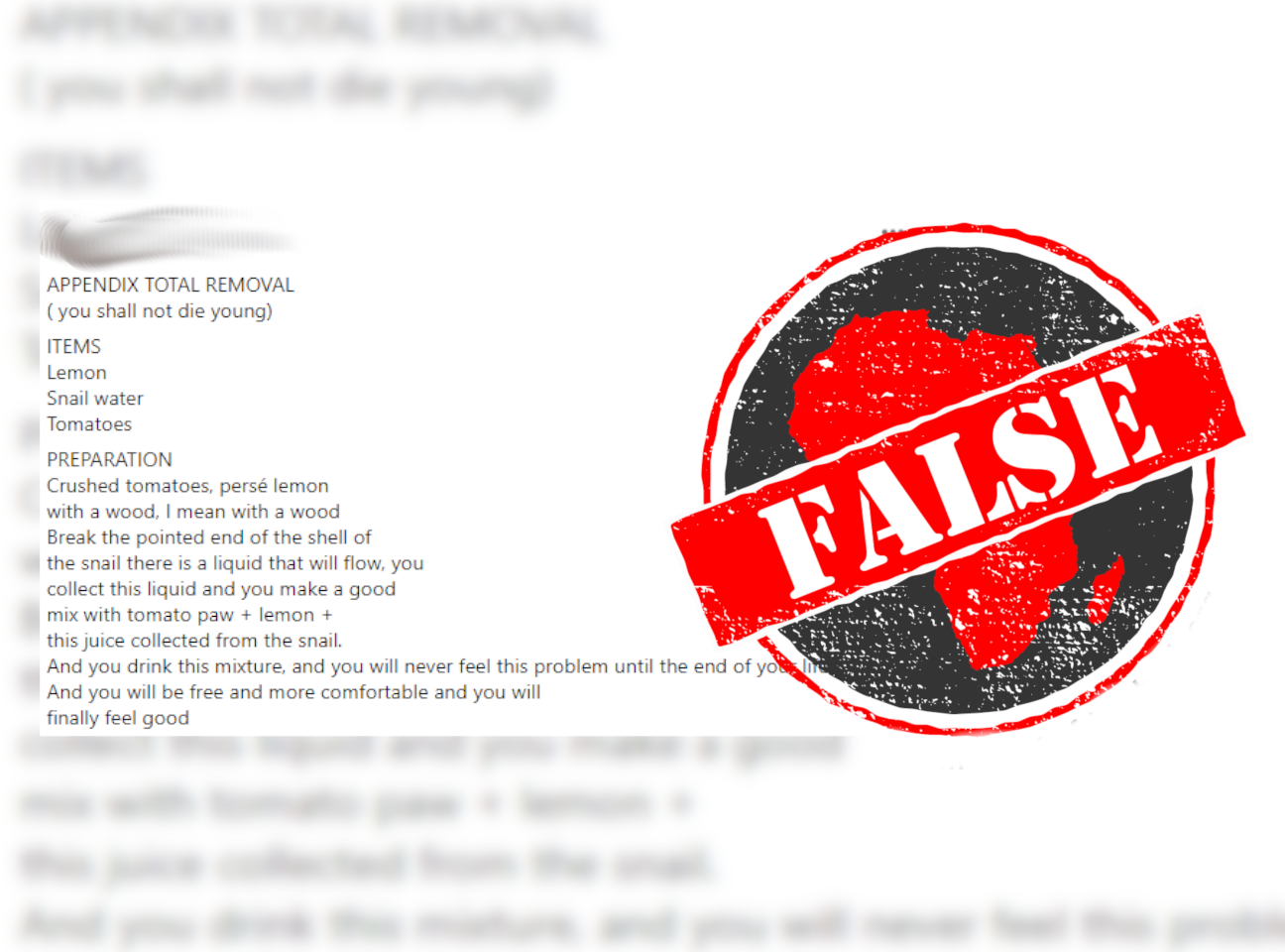 Removal of appendix common, only necessary in emergencies

The appendix is a small organ attached to the large intestine. It is thought to be a vestigial organ, meaning that it is the remains of another organ which became less useful over time as humans evolved.

This is because the appendix does not appear to have a useful function in the human body. One side effect of this is that a person can live a completely healthy life after having their appendix removed.

Appendicitis, or inflammation or swelling of the appendix, however causes pain and sometimes nausea, vomiting or fever. If left untreated, the swelling may cause the appendix to burst, leading to infection and possible death.

The standard treatment for appendicitis is the removal of the appendix through a surgery called an appendectomy. As US medical organisation Johns Hopkins Medicine explains, an appendectomy is usually an emergency procedure, performed very soon after appendicitis has been diagnosed.

The organisation also notes that appendectomies are common, and have a very low risk of complications.

Don’t eat raw snails; see doctor if you think you have appendicitis

The appendix cannot be removed without surgery, and there is no evidence that it can be removed by drinking a combination of lemon juice, crushed tomato and “snail water”.

The post gives the following instructions for how to prepare snail water: “Break the pointed end of the shell of the snail there is a liquid that will flow, you collect this liquid.”

But as this example snail dissection shows, a snail’s shell contains a number of different internal organs, and so breaking it open would release several bodily fluids.

People are advised not to eat raw snails, as they may carry dangerous parasites or, if grown commercially, may have consumed chemicals like fertilisers and pesticides which could make a person ill.

If you do experience symptoms like sudden pain in the lower right of your stomach area, nausea and vomiting, loss of appetite or fever consult a doctor immediately.

Severe appendicitis requires emergency medical attention, and could lead to death. It is highly unlikely it can be treated without surgery.