No, more than six media companies in world, and ‘the Rothschilds’ don’t own news agencies Reuters and AP

“There are 6 media companies that exist today, but there used to be 88,” begins text on a screenshot posted on Facebook in South Africa in April 2022.

“All 6 get their news from Reuters and the Associated Press. Reuters owns the AP and Rothschilds own Reuters.”

It includes a photo of Lord Jacob Rothschild, the fourth baron Rothschild.

The claim has also appeared on Twitter and websites.

It’s years old, and wrong on every point. And its core argument that “the Rothschilds” control all news is simply another example of a centuries-old antisemitic conspiracy theory targeting Jewish people.

There are thousands of “media companies that exist today”. Most who provide news do get some of it from wire services such as Reuters and the Associated Press. But any large and credible news outlet would also have its own journalists producing its own news.

More than this, “the Rothschilds” don’t own Reuters, and Reuters doesn’t own AP. 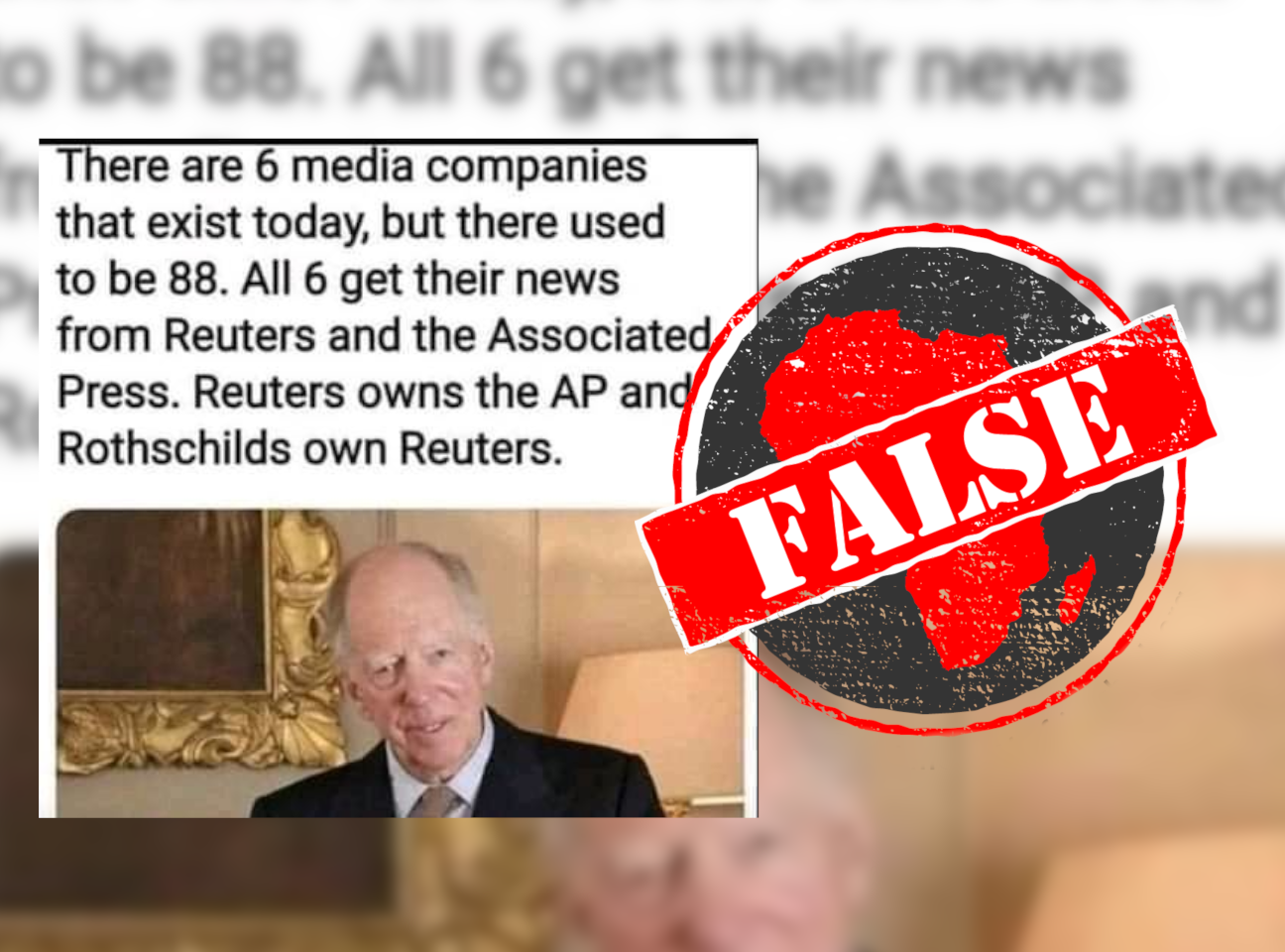 The first problem with the claim is that it defines very little. What is a media company? Are there only six media companies in a single country, or across the world? And who are “the Rothschilds”?

“Media” can mean many things. It includes apps, websites, newspapers, books and magazines. Music, film and TV are also media, as are photos, artwork, graphics and illustrations. Advertising, marketing and public relations are part of the media industry.

And while other fact-checkers have assumed that the claim applies to the USA only, it doesn’t say so. More than this, it has spread across the world.

Finally, “the Rothschilds” is simply antisemitic code for wealthy Jewish people. The screenshot shows Jacob Rothschild, who is English. But there are many other people with the surname Rothschild.

And as mentioned above, those who produce news don’t rely solely on Reuters and AP. They have their own journalists.

But who actually owns Reuters? And does Reuters own AP?

About two-thirds of Thomson Reuters shares are owned by Woodbridge. This is a private investment firm for the family of Roy Thomson, a Canadian who in 1934 founded what was to become the Thomson company.

Reuters does not own the Associated Press. Instead, AP is an independent nonprofit cooperative owned by newspapers and broadcasters in the USA.

“We were founded as an independent news cooperative and remain owned by our US newspaper and broadcast members, steadfast in our mission to inform the world,” AP says on its website.

And again, no member of AP’s management committee or board of directors has the surname Rothschild.