No, Namibian president hasn’t promised to send troops to Ukraine

Screenshots of tweets and Facebook posts – and some original tweets – are circulating online claiming that Namibian president Hage Geingob has said he will be sending Namibian soldiers to Ukraine to “fight Russian troops” in the ongoing Ukraine-Russia war.

Many of the screenshots appear to be of messages posted by the news agency the Namibian.

The screenshots started doing the rounds on 24 February 2022, the day Russia launched a full-scale invasion of Ukraine.

But the claim is false, and the Namibian never posted the messages. So what’s the truth? 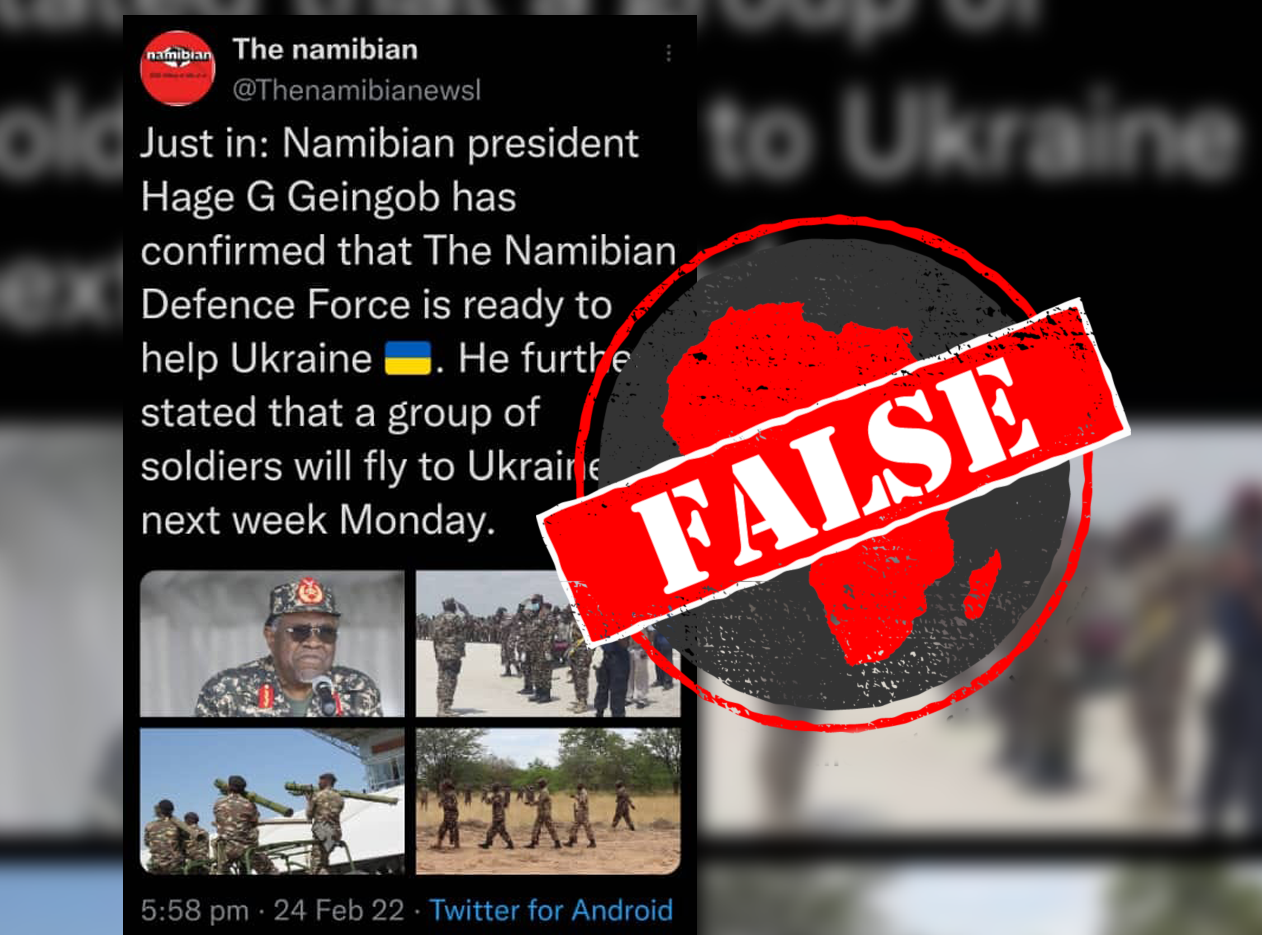 The Twitter screenshots use the same profile picture and screen name as the Namibian, but were posted by an imposter account.

The Namibian’s Twitter handle is @TheNamibian, but the account that made the false claim went by @Thenamibianewsl at the time. Using a handle or screen name similar but not identical to a trustworthy account is a common way of spreading false claims.

The imposter account has since changed its handle to @Global_22_ and deleted the original tweet, but the account can be identified by its user ID: 1247685739791421440. This is a unique identifier that cannot be changed. It can be found in the page source of archived versions of the tweet, as well as by using online tools to determine the account’s current ID.

The @Global_22_ account currently includes the flag of Mali (along with the word “Mali”) in its bio, with no indication that it is a Namibian account.

The actual Namibian wrote on both Facebook and Twitter that the claims were “false information” and warned readers not to share them. It wrote: “The Namibian urges its readers to be vigilant of fake news, and to compare posts such as the one in question with an official report from the newspaper’s website.”

The Namibian has noted false information circulating under its banner on social media.

The latest is a caption claiming president Hage Geingob has deployed the NDF to assist Ukraine amid tensions with Russia. pic.twitter.com/qumUSD2CeZ

But the fake Namibian account wasn’t the only one making this or similar claims. So how has Namibia actually responded to the war in Ukraine?

The Namibian presidency has not released a statement on the Russian invasion of Ukraine, but the country’s international relations ministry has.

“Namibia’s position is guided by Article 96 of the Namibian Constitution which encourages the settlement of international disputes through peaceful means,” the statement reads. “Namibia, therefore, calls on all parties involved to resolve the conflict through a peaceful dialogue.”

There has been no indication that Namibia, or Geingob, would be sending armed forces or other military aid to Ukraine. In subsequent press releases, the ministry reiterated its call for a peaceful resolution to the hostilities.