“Leaked emails expose Governments 'underhanded' vaccine plan,” reads a headline on a screenshot of what seems to be a Facebook post by the New Zealand Herald. The screenshot is in turn circulating on Facebook and Twitter, including in South Africa.

It shows a photo of New Zealand prime minister Jacinda Ardern. Text above reads: “The emails between Government officials and mutiple local councils appear to discuss the possibility of introducing the covid vaccine into city water supplies in areas where the vaccination rates haven't reached 90%.”

The New Zealand Herald is an established daily newspaper with the country’s highest print and digital circulation.

The Arden administration’s swift response to the Covid pandemic has in part kept New Zealand’s death toll low, and is said to have contributed to the Labour Party’s landslide election victory in 2020.

New Zealand started its Covid vaccine rollout in February 2021. By 6 February 2022, 82.1% of the population had received at least one dose of a vaccine, and 76.8% were fully vaccinated.

But did the New Zealand Herald really report that it had uncovered an “underhanded” plan by the government to introduce Covid vaccines into city water supplies? 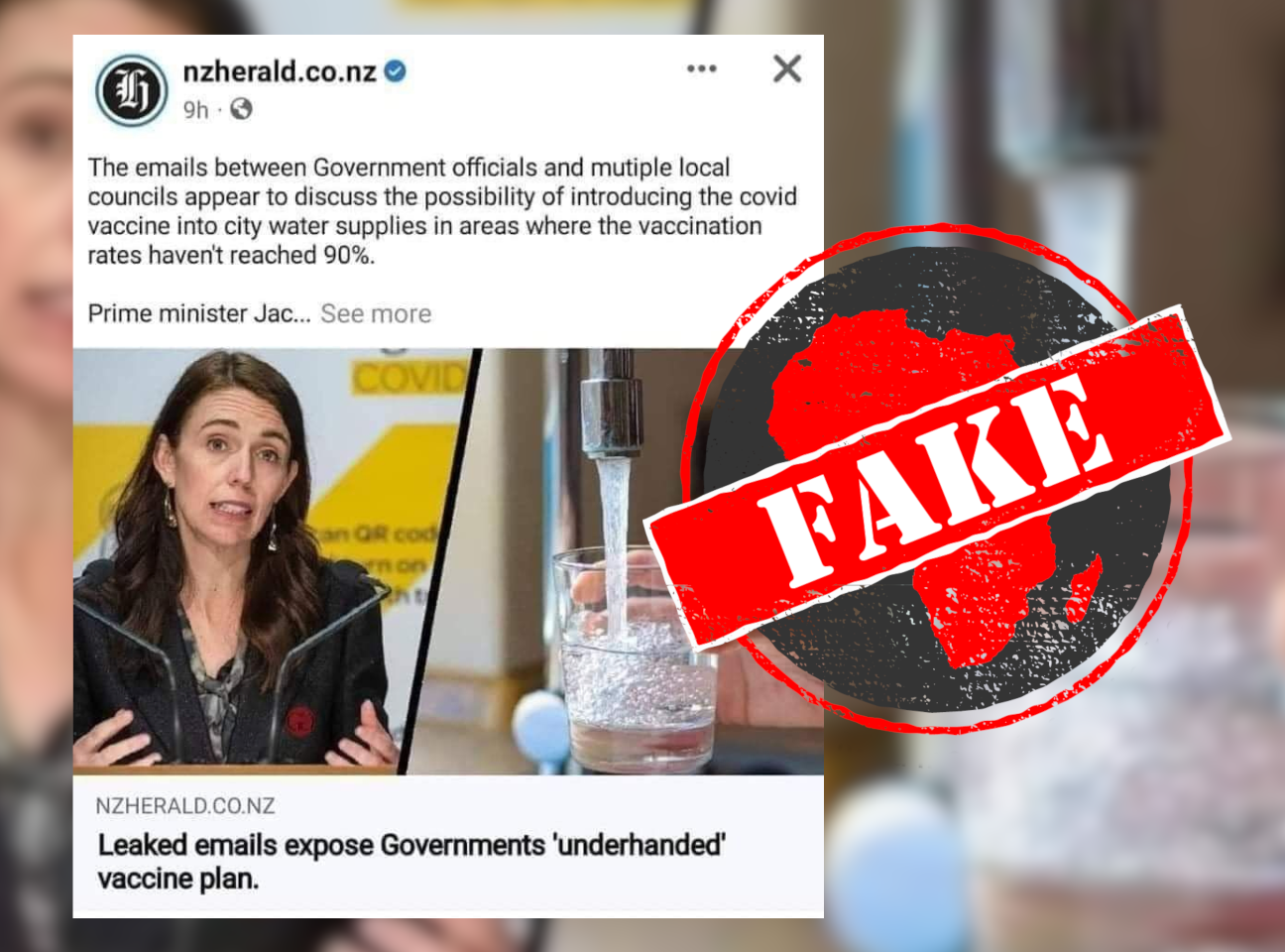 The screenshot is clearly fake, for several reasons.

First, the text has several errors that would be unlikely in a major newspaper. In the headline, “Governments” is missing an apostrophe. In the text, “multiple” is misspelled as “mutiple”. And the New Zealand Herald uses a capital C for Covid – it doesn’t use “covid”.

Second, the article could not be found in a Google search for the headline, restricted to the newspaper’s website. And it doesn’t appear on the New Zealand Herald’s Twitter and Facebook pages.

Third, releasing a Covid vaccine into a city’s water supply simply wouldn’t work – and would be a huge waste of valuable vaccines. All the current Covid vaccines have to be given as an injection into the upper arm by a healthcare professional. We don’t yet have a vaccine that can be administered orally.

And putting vaccines into the water supply would break the cold chain, making them useless. As New Zealand’s ministry of health points out, the Pfizer-BioNTech jab – the country’s primary vaccine – has to be stored “at -70ºC for up to nine months and at normal fridge (2ºC to 8ºC) temperature for 31 days”.

Finally, such a bombshell of a story would have been widely reported across the world. But there is no sign of it – other than the screenshot.

“No such post – or story – was ever produced by the NZ Herald,” Shayne Currie, the newspaper’s managing editor, told Reuters.