“The Nigerian Government is offering Herdsmen N100 Billion so they can kidnapping and other criminal activities,” reads a tweet from 24 January 2021. “N100 Billion Naira to a group that has kidnapped, killed and destroyed Livelihoods. Incredible.”

The video’s voiceover begins: “The federal government, led by minister of the interior Abdulrahman Dambazau, met with the Miyetti Allah Cattle Breeders Association of Nigeria in Kebbi State, offering them the sum of N100 billion over two years to stop the kidnapping in the country.

“The meeting lasted over four hours on Friday as negotiations dragged on, with the association initially asking for N160 billion.”

The video was also posted on the verified Twitter account of Dele Momodu, the publisher of Ovation magazine and a former presidential aspirant, on 24 January. Momodu tweeted: “Incredible things happen in this country!!!” 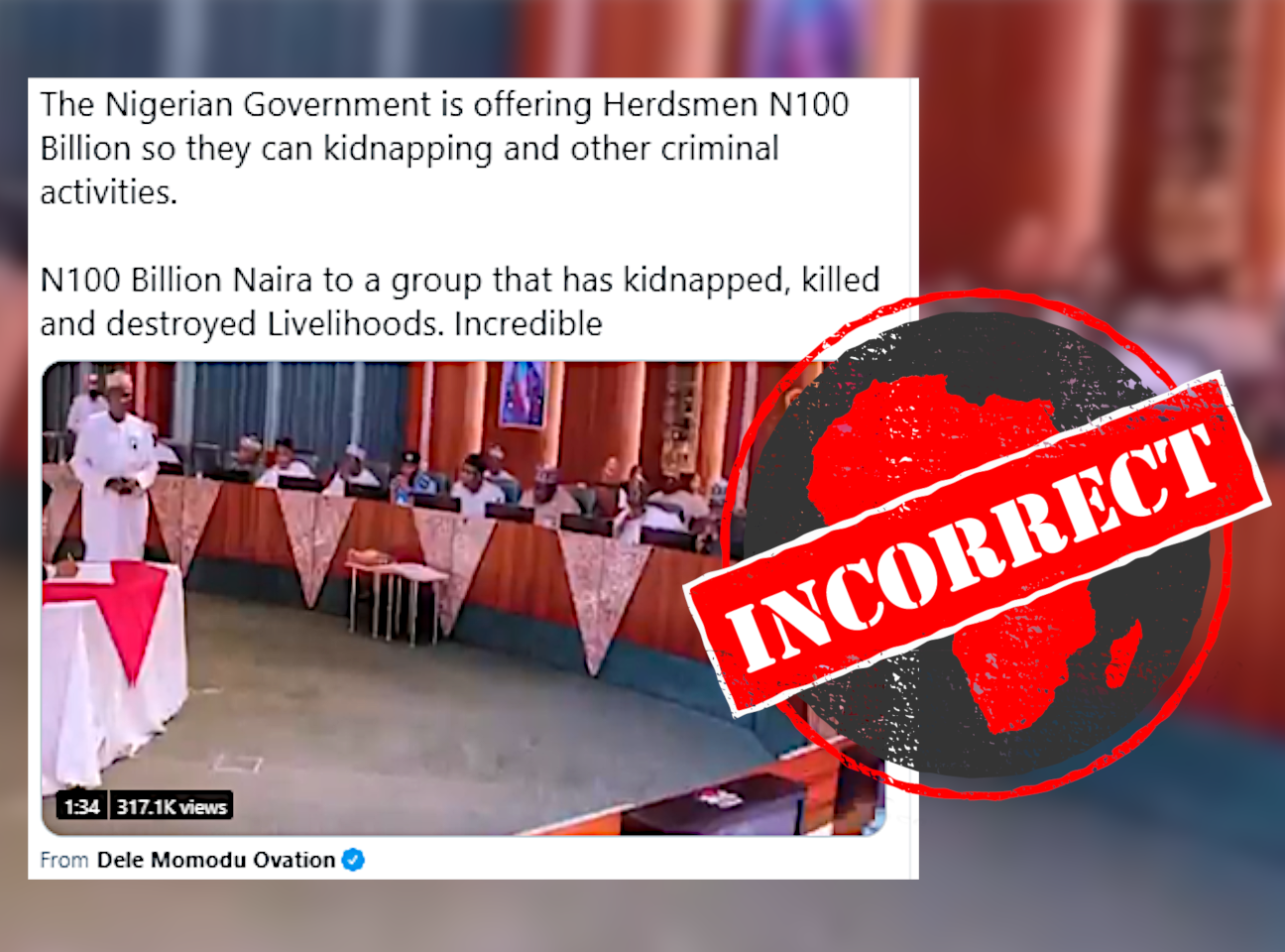 Kidnapping for ransom, conflicts with farmers

The Fulani are a widely dispersed group of mainly Muslim cattle herders scattered across West Africa. The Miyetti Allah Cattle Breeding Association, known as Macban, is an advocacy group for Fulani pastoralists in Nigeria.

The tweets come after recent tension between Fulani herders and people – often farmers – in Ondo and Oyo states in southwest Nigeria.

Armed Fulani herders are “widely associated with kidnapping for ransom and conflicts with farmers across the country”, Nigeria’s Premium Times said in February, “although criminals embedded in their midst have been largely responsible for this menace”.

Has Nigeria’s federal government offered Fulani herders, via Macban, N100 billion to “stop the kidnapping in the country”? We checked.

The long tail of the N100 billion tale

The video was tweeted in January 2021, but was first posted on the Roots TV YouTube channel on 4 May 2019. It is almost two years old. For one, Abdulrahman Dambazau is no longer Nigeria’s minister of the interior – Rauf Aregbesola now is.

And back in 2019, its claim was widely debunked.

The story of the N100 billion goes back to 2014, when the federal government was reportedly considering setting up a fund of that size to establish “mini modern ranches” across Nigeria.

The fund was mooted by the Committee on Grazing Reserves as a response to the “struggle for land and water resources by the herdsmen and farmers, uncontrolled influx of nomadic farmers into Nigeria and issues on grazing reserves in states”.

Then in 2019 the government announced a N100 billion National Livestock Transformation Plan. Ebonyi state governor Dave Umahi said its aim was to “transform the livestock production system in Nigeria along market-oriented value chain while ensuring an atmosphere of peace and justice”.

In May 2019 Saleh Alhassan, national secretary of Miyetti Allah Kautal Hore – another herders’ association – said his group had demanded N100 billion from the federal government, but for the construction of ranches.

“People now saying they have given Miyetti Allah N100 billion to stop kidnappings are just being mischievous because from what we have observed, there are certain people that are twisting narratives,” Alhassan told Nigeria’s Punch newspaper.

And in an interview on Channels Television on 7 May 2019, president Muhammadu Buhari’s spokesperson Garba Shehu said the claim that Macban had been offered N100 billion to stop the kidnappings was an “absolute falsehood”.

In a press conference, also on 7 May, acting inspector general of police Mohammed Adamu said the rumour was a figment of “somebody’s imagination framed up to distract attention”.

“There was nothing like that. That information you got was social media information,” he said. “There was no any discussion to that effect. The source of the information, nobody knows, and certainly it is not from government.”

Then on 11 May 2019, a week after its initial report, Roots TV posted a second video that essentially fact-checked the first. It said that while the meeting between the federal government and Macban had taken place, there had been no discussion of a N100 billion payment to stop the kidnappings.