A recent Facebook post is warning parents that a “creepy online figure”, a character known as Huggy Wuggy, is appearing in videos telling children to “kill their parents & little babies”.

The post attracted more than 9 million views in just a couple of weeks after being posted in early April 2022.

The article, titled “Creepy online figure Huggy Wuggy pushes kids to kill their parents,” appears to be the original source of the claim reposted on Facebook.

Africa Check reached out to Kidspot for evidence of videos encouraging children to commit violent acts. At time of writing, the outlet had not responded.

It is understandable that parents might be horrified at the thought of young children being exposed to the Huggy Wuggy character. But is the claim true? We checked. 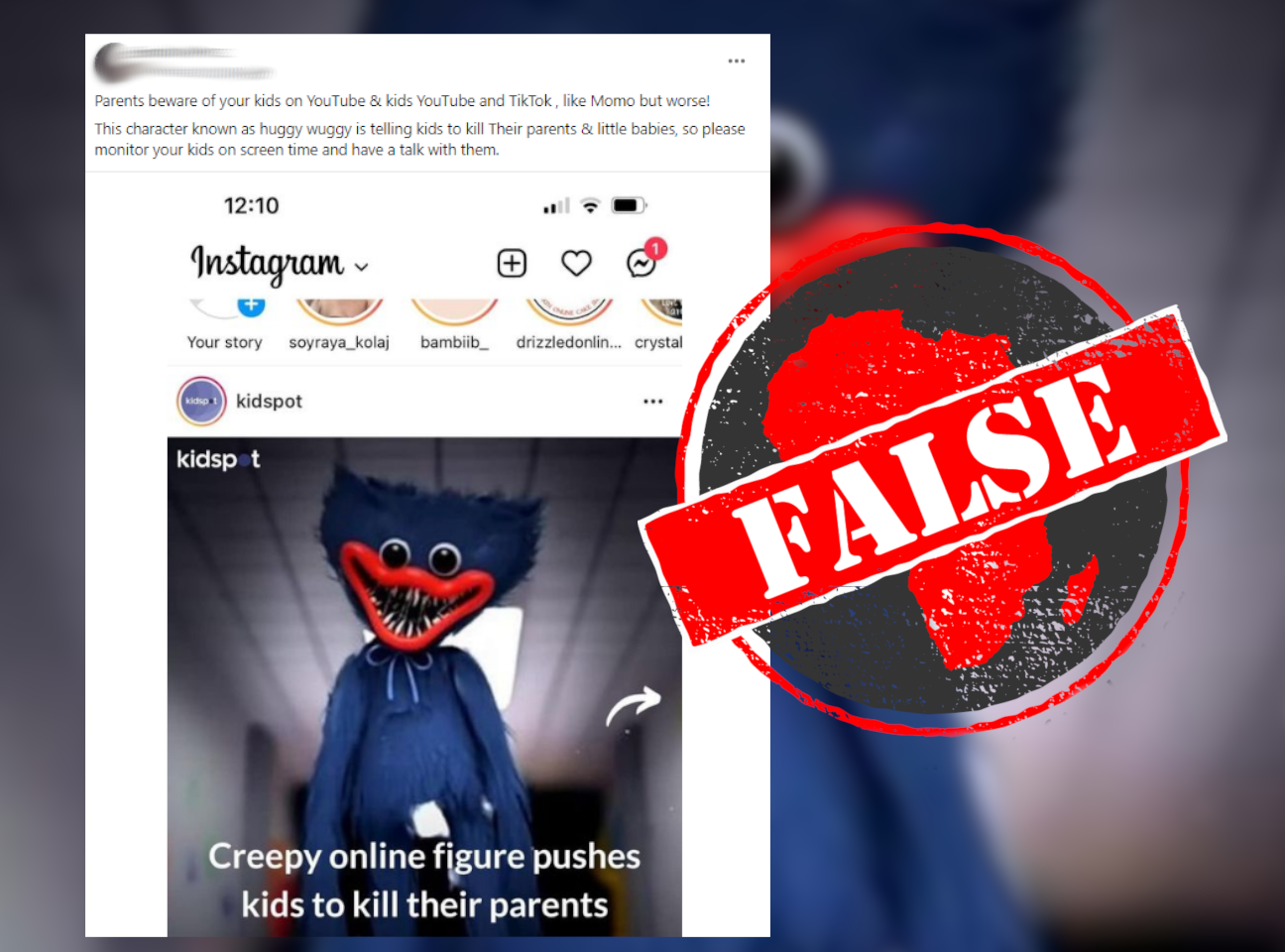 Huggy Wuggy from scary video game not meant for kids

The character, Huggy Wuggy, looks like a demented teddybear, with with a creepy smile, razor-sharp teeth and googly eyes.

And it is real – in the sense that the character exists. It originates in a video game called Poppy Playtime.

With an age restriction of at least 12 years and older, depending on the platform, the survival horror game is not intended for young children.

These fears appear to have first been sparked by concerned parents and teachers in the UK, who reported children had been reciting disturbing phrases from songs in online videos featuring Huggy Wuggy.

One mother told Sky News her toddler tried to climb up her bedroom window saying he “would die and come back to life”, and “that’s what Huggy Wuggy does”.

The ensuing panic prompted news articles across the globe. The police in Dorset in southwest England also issued a warning to parents about the videos.

Many reports relate to one particular video, made by a fan of the game and uploaded to YouTube and TikTok. The video features Huggy Wuggy singing a song that includes the line: “Cause I could just hug you here. Forever, forever. Till you breathe your last breath.”  The character does not sing songs in the original Poppy Playtime game.

The video’s creator told fact-checking website Snopes that the upload settings for the video would not have enabled it to appear on YouTube Kids. At time of writing, the phrase “Huggy Wuggy” was not searchable on YouTube Kids. A YouTube spokesperson also told Sky News that the videos were not available on the children’s platform.

Similarly, a TikTok spokesperson told Snopes that to the best of their knowledge such videos did not appear on TikTok for Younger Users, meant for users under 13.

No evidence of kids being instructed to commit violent acts

Other unofficial videos featuring Huggy Wuggy, also made by fans of the video game, can easily be found on YouTube, TikTok and other social media platforms. But we could not find any videos that included instructions or encouragement for children to commit any violent act.

The article is about the “Momo challenge”, and is also misleading. The Momo challenge was a viral story in 2019 that sparked similar fears but was based on unfounded claims.