“This is the Texas Shooter but People Who Wear Work Boots & John Deere Caps Are The Problem,” reads a graphic circulating on Facebook. It shows a photo of a person in a short skirt.

On 24 May 2022 18-year-old Salvador Ramos shot 21 people, including 19 children, to death at an elementary school in the US state of Texas.

Ramos’s rampage began when he shot his grandmother in their home, seriously injuring her, before driving to the school. There the shooting lasted for more than an hour before he was killed by police. It was the deadliest mass shooting in the US in a decade, and one of more than 200 in 2022 – so far.

One post of the graphic has gained attention in South Africa and the US, with almost 34,000 views in the first two days after it was posted.

But does the photo really show Ramos? 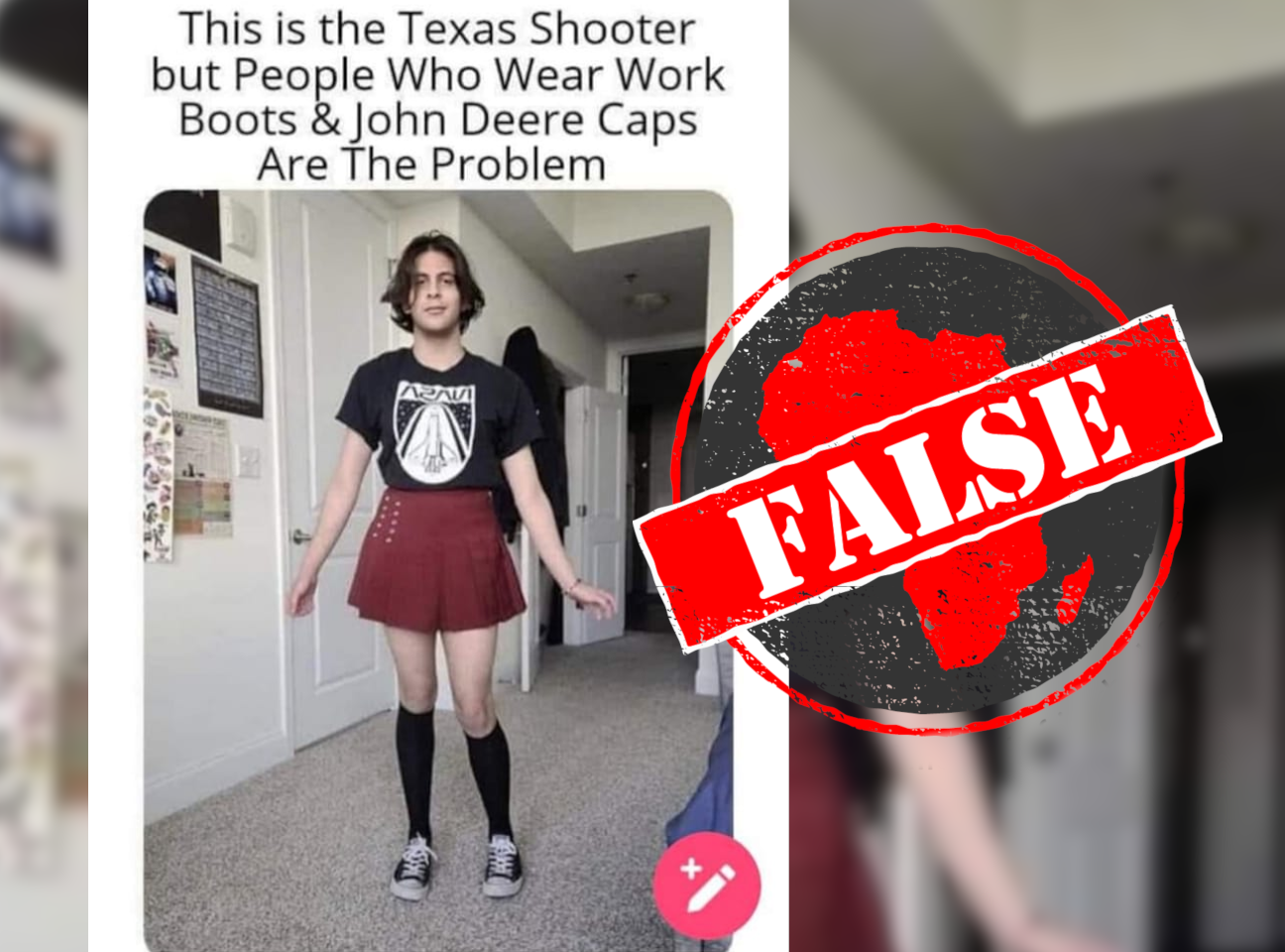 As reported by AFP, the graphic seems to have first appeared on 4chan, an anonymous messaging board that has previously been associated with US mass killings. Other versions of the graphic circulated on Twitter and Instagram after the shooting, also claiming the photo was of Ramos.

Other photos of the same person (and, reportedly, two other women) were also used in posts making this same claim, some displaying the trans pride flag. As reported by Rolling Stone and others, these posts linked the shooting to the shooter’s gender identity.

In reality, most of these photos are not of Ramos but of a trans woman reportedly from the US state of Georgia, known only as Sam.

She posted the selfies on Reddit in late April. They included the photo in the graphic, which she posted with the caption: “I got a new skirt and I think it’s my favourite.” Sam has exposed the graphic as false, posting on Reddit: “It’s not me, I don’t even live in Texas”.

Sam, who appears on Reddit as u/Apprehensive_Ad_995, also posted a selfie entitled “PROOF” on the day after the shooting, to counter the disinformation spreading. In it, she is standing in front of a trans pride flag, holding a piece of paper with “25 May 2022” written on it.

Sam told NBC news that the false claims using her photos started soon after news of the shooting first emerged. The claims were then reportedly picked up by a group of conservative Facebook users in India, as well as the prominent conspiracy theorist Alex Jones. AFP reported that the Republican US congressperson Paul Gosar had claimed the shooter to be a “transsexual leftist illegal alien” in a tweet that has since been deleted.

Sam told NBC: “Transphobic people exist and people are quick to blame someone for terrible things instead of looking for the truth about what actually happened.”

Real photos of Ramos have been released by the police.