No, photo of tiny chickadee sculpture – not the zunzuncito, the world’s smallest bird

A meme shared on Facebook in December 2019 claims to show the world’s smallest bird.

A photo appears to show a tiny grey, white and black bird, sitting on a person’s index finger. The caption says: “The Zunzuncito is the smallest bird in the world. It is also called fly bird, elf or bee bird.”

The zunzuncito – or bee hummingbird – is the world’s smallest bird. But is that what the Facebook meme shows?

The zunzuncito is found on the island of Cuba in the Caribbean. It is the world’s smallest bird, according to a variety of sources, including Guinness World Records. The male of the species only measures 5.7 centimetres and weighs 1.6 grams, while the female is a bit larger.

But as a quick image search reveals, the bird pictured in the Facebook meme looks nothing like the bee hummingbird. The tiny hummingbird is grey, black and iridescent blue or grey, sometimes with a pinky-orange head and a longer, thinner beak. 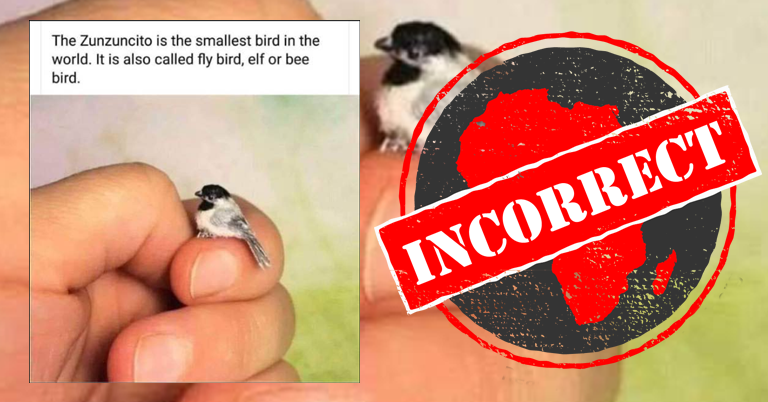 A reverse image search shows that the same photo of the small grey, black and white bird is used as the profile picture for the social media pages of Malinik Miniatures. These are the pages for an artist from Bulgaria, now living in the US, who makes miniature sculptures.

The artist only gives her first name, Ina, and says: “I specialize in animals and mostly birds – everything is individually handmade and One of a kind. I work with polymer clay and wire to make the sculpture, and then cover it with feathers or fibers. I always try to make my creatures as realistic as possible...”

She sells her sculptures on Ebay.

Other photos of the same sculpture on the Malinik Miniatures Facebook page make clear that the bird depicted is a chickadee, not a bee hummingbird. The real chickadee is substantially larger than the world’s smallest bird, at 13 centimetres long. – Eileen Jahn