No, photos show women in South Africa and Kenya protesting sexual assault, not ‘lack of men to get them pregnant’

A user on Facebook posted two photos with a claim they showed “ladies in Kenya protesting for a lack of men to satisfy them and get them pregnant”.

One photo shows a group of women dancing in the street while a crowd follows. The other shows three women walking. The one closest to the camera has a purple ribbon pinned prominently to her dress.

The caption reads: “Ladies in Kenya are protesting for lack of men to satisfy them and get them pregnant … Wow! Wow! … And some girls are doing yanga for you here. Bro if them do pim again! We dey go Kenya”.

The last part is in Nigerian pidgin and translates to “And some girls are playing hard to get here. If they keep at it, we’ll go to Kenya”.

In 2015, women in Ndeiya in Limuru constituency northwest of the Kenyan capital, Nairobi, held peaceful demonstrations claiming that husbands in the area were alcoholics and unable to get their wives pregnant. During the protests, they suggested that men from other parts of Kenya should fulfill these duties.

The first photo of women dancing has circulated since 2016 with the claim it showed these Kenyan women. But is that correct? 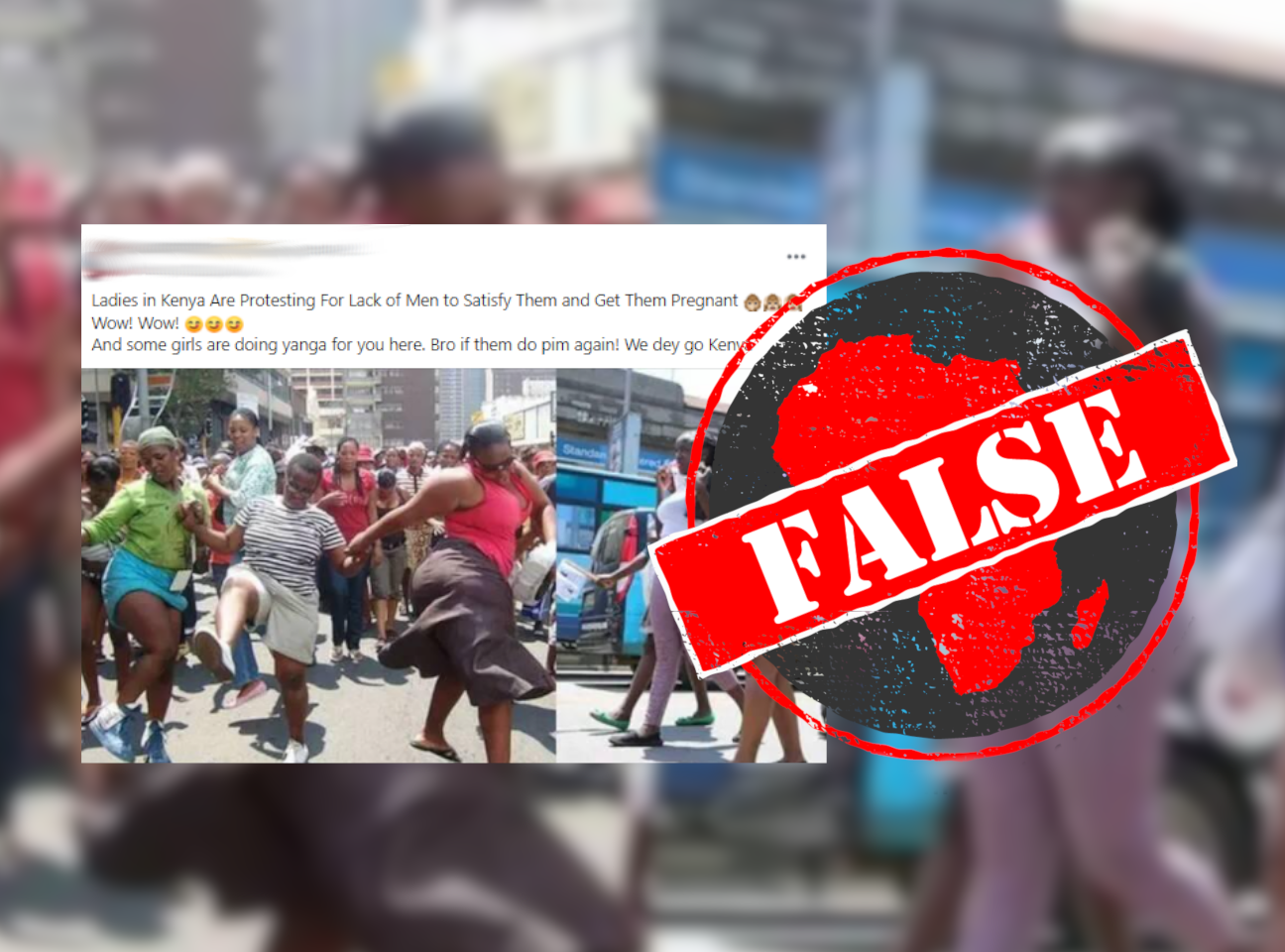 An early red flag was the traffic lights in the background, which are not of the type found in Kenya.

A TinEye reverse image search of the first photo shows that it was online as early as 18 April 2008.

A further search on Yandex led us to a blog which republished an email with multiple photos, claiming the protest pictured took place in South Africa.

The email was sent on 28 October 2009 and links to a news story published by the BBC, last updated 4 March 2008. The BBC article opens: “Hundreds of South African women have marched to a Johannesburg taxi rank, where a woman was sexually assaulted for wearing a miniskirt.”

Another blog published on 5 April 2008 also shows a series of photos from the protest.

A further search led us to a 2019 debunking by AFP Fact Check, which pinpointed exactly where the photo was taken. It was on Plein Street in Johannesburg, only 2 kilometres from Africa Check’s South African office.

A Google reverse image search of the other photo led us to an uncropped version, which shows a group of six women.

A further search led us to an article published 19 November 2014 with more photos of a protest in Nairobi, Kenya, held under the hashtag #MyDressMyChoice.

Large crowds protested against gender-based violence and the police reaction to it, after a video of a woman being assaulted and stripped naked for wearing a miniskirt went viral. The colour purple became a symbol of the protest, and many of the women wore purple clothes or ribbons.

According to reports in the international media, the protest took place on 17 November 2014.

Neither photo shows women demonstrating about a “lack of men”. Instead, they show women from South Africa and Kenya protesting how women are treated by men.